Except as seems useful or interesting now and then, it is not the goal of Time Goes By to keep readers abreast of current health issues. But this year, the flu season arrived early and is more widespread than has been seen in the recent past.

This is the Centers for Disease Control and Prevention's [CDC] most recent flu map: 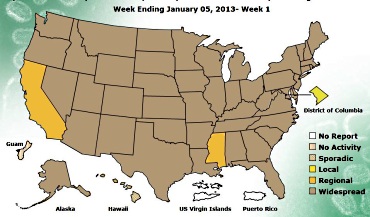 So unless you live in California, Mississippi or the District of Columbia, you are at fairly high risk:

”Deaths in the current flu season have officially crossed the line into 'epidemic' territory, federal health officials said Friday, adding that, on the bright side, there were also early signs that the caseloads could be peaking,” reports The New York Times.

WHY ELDERS NEED THE FLU VACCINE
The flu can be particularly dangerous – that is, life threatening – to elders because our immune systems do not function as well as they did when we were young and cannot fight the virus as effectively.

The Centers for Disease Control and Prevention (CDC) is urging old people to get the flu shot:

”Vaccination is especially important for people 65 years and older because they are at increased risk for complications from flu.”

Some of those complications include pneumonia, bronchitis, sinus and ear infections, and it can exacerbate chronic health problems such as congestive heart failure, lung disease, asthma and a number of blood, kidney and liver disorders.

There are only a few instances of elders who should not take the vaccine:

WHAT KIND OF SHOTS ARE THERE?
There are two available shots for elders:

The nasal vaccine is recommended only for people age 2 to 49 who are not pregnant.

HOW MUCH DOES THE SHOT COST?
Traditional Medicare and Medicare Advantage plans cover the flu shot with no copay or deductible and you can get it anywhere so long as the provider is enrolled in Medicare. You do not need a referral.

• You can catch the flu from the flu shot. WRONG. The vaccine is made from a killed virus. If you get sick right after a shot it is because you had already contracted the virus and it takes a couple of weeks for the vaccine to work.

• The shot guarantees you will not get the flu. WRONG. There is that two week period before the vaccine takes effect and, says the CDC, this year's vaccine has a 62 percent effective rate, which is about average year to year.

• “I had a flu shot last year and that should hold me.” WRONG. Flu viruses mutate and the vaccine is reconfigured each year to account for new strains.

You can read about other flu myths at this Harvard Medical School webpage.

NOTES ON PREVENTION
As noted above, the vaccine is about 62 percent effective. Here are some other important, commonsense practices to help keep you healthy this flu season:

So please, if you have not done so, it is not too late to get a flu shot. Although it takes about two weeks for antibodies to develop to protect you, the flu season extends into May leaving plenty of time to make the shot worth your effort.

And worth it for the people you might infect if you get sick. If you do get sick, for the sake of everyone else, stay home until you are well. Adults are contagious from a day or so before they feel symptoms and continuing for up to seven days after becoming sick.

Here is a good, short recap covering a lot of what I've reported above.

Just a minor correction: that is Mississippi, not Alabama, in the map. I live in Alabama, and the flu here is also widespread.

Thanks for the other info!

Excellent advice ... esp. about washing hands. So far the flu hasn't hit our family or small circle of friends. But everyone I know has gotten the flu shot.

Truth in advertising though. No, you can't get the flu from the shot, but you can suffer some [usually] mild side effects. Still, well worth it, imho.

The high dose vaccine can contain latex which I am very allegic too as are others. Per the FDA the prefilled syringe tip caps of Fluzone and Fluzone High-Dose may contain natural rubber latex which may cause allergic reactions in latex sensitive individuals. I do get the regular dose vaccine every year however.

My husband refuses to get the flu shot because he's superman, don'tcha know. But this year he got knocked down pretty hard by this flu (I didn't), and I am hoping this has made him a believer.

I'm disheartened by some of the recent coverage of the flu epidemic. Getting a flu shot has become easier and easier.

They're free (or very inexpensive) and convenient since you can get one in many supermarkets or pharmacies. And you'd go to the supermarket anyway.

And yet only about 50% of us get the flu vaccine every year, and we make all sorts of excuses about not having enough time or money.

Meanwhile, there are many reports of people with flu going to hospital Emergency Rooms. So it's costing us billions to treat a disease which is largely preventable.

Full disclosure: I got my flu shot on October 5, 2012 at a Rite-Aid pharmacy in Seattle.

Got my high-dose shot in October and am keeping my fingers crossed. It helps that I'm something of a recluse. I try to be careful at the supermarket not to touch my face, and always wash my hands when I get home.

You didn't mention Tamiflu for people who do get sick. I've read mixed reports on its effectiveness, the best saying it might knock a day off the duration of your illness. Nobody discusses how someone who already has the flu is supposed to get to the doctor, or whether it's even advisable to sit in a waiting room exposing others and being exposed, in order to get some Tamiflu.