GAY AND GRAY: Gay Elder Takes Up a Cause

San Francisco is one of the few U.S. cities that retains some rent control protections for tenants. It is situated on a peninsula so sprawl is impossible and the beneficiary of what seems a permanent tech boom and subsequent real estate boom, rent controls are what keeps the city somewhat affordable for ordinary working people.

Two-thirds of San Franciscans are still renters making this expensive place very unlike most U.S. cities.

Naturally, real estate speculators have long sought to find ways around our rent control provisions. They usually lose politically in the local arena so they went to the state legislature and won something called the "Ellis Act" which allows them to evict all tenants - even long-standing, older/disabled, legally "protected" tenants - if they will swear up and down that they are taking the building out of the rental market for at least five years.

We don't let them sell it off as condos but they can create "Tenancies in Common" in which multiple owners hold a multi-unit property together. (Full disclosure: I've been part owner and occupant of such a property - just two units - for more than 20 years.) 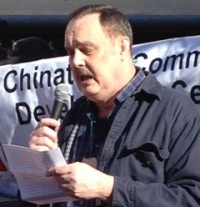 Recently Jeremy Mykaels found himself on the wrong end of such an Ellis Act eviction and he is fighting back. He has been speaking at community events and has created EllisHurtsSeniors.org which includes a boycott list of 31 San Francisco properties not to buy because the owners recently used the Ellis Act to evict one or more senior or disabled tenants.

Since he is gay himself, he's particularly conscious of the danger to older gay men living with HIV on fixed incomes. They have spent a lifetime creating a network of social connections and medical services they will never be able to duplicate in a new locality.

Here's some of Mykaels' story:

”We just had a big election in this country choosing between two distinct views of government - the 'we're all in this together' view where we don't abandon the vulnerable among us and the 'you're totally on your own' limited government approach.

“California, and San Francisco especially, voted for, and for the most part agree with, President Obama's 'we're all in this together' view of government which is why years ago we put in place rent control laws to begin with.

“Shouldn't we act accordingly and do our best to protect our senior and disabled long-time residents and keep them from losing their homes just because someone else wants to make a windfall profit?

“...I think using the Ellis Act to evict seniors and/or disabled tenants who have lived in their apartments for 10, 15, 20, 25 years or more, most times just subsisting on fixed incomes and who may be forced to move out of San Francisco altogether because they won’t be able to afford a new apartment here with rents at least 2-3 times higher than they have been paying under rent control, is simply WRONG!

“This is not how a compassionate community or city should treat its seniors and disabled residents and it is my goal to outlaw using the Ellis Act by owners and real estate speculators to evict senior and disabled tenants from their rent-controlled apartments.

“On a personal note, I have always been a very private person not prone to sharing information regarding my problems publicly with people outside of my small circle of friends and family and I have always tried my best to handle these problems on my own.

“But now, faced with the loss of my home and the real possibility that I will be forced to leave my beloved city of San Francisco forever, I have decided to publicize my eviction - even if that includes having to make my health problems and financial limitations public as a result of this effort.

“I am not looking for pity. I just want to shed a light on a growing problem in this city for many senior and disabled tenants like myself and hoping for a little justice. I may eventually lose this fight, but at least I will know that I took a stand and didn't fall prey to the intimidating tactics of real estate speculators and their lawyer to get me to vacate my home.

In December, Tommi Avicoli Mecca from the Housing Rights Committee told the Chronicle about the rising epidemic of evictions:

"'They are motivated by greedy landlords and speculators who want to make a ton of dough selling' the buildings. His group has tracked at least 26 buildings where Ellis Act evictions have been filed this year…”

Median rents these days in San Francisco are $3000/month. According to federal government suggestions, your housing costs should be one-third of your income. At the current rent level, that means San Francisco renters would need to make $108,000 annually to live here. Many don't, of course. And the city is not (yet) willing to become nothing more than a boutique playground for the extremely rich.

Along with Mr. Mykaels, I find myself asking: can't we capture some of this wealth coming into our community to preserve the life styles and lives of our long-time residents?

Sadly this appears to be nothing more than another notch in the ever growing plutocracy belt that is squeezing out the most vulnerable in our society.

Jan, this is shocking information. It is disgusting as well as frightening how greed wins because they have the deep pockets. Only the loud and persistent voice of the people can stop them. Good for Jeremy Mikaels for fighting back. If more of us would do that we might take our country back from the greedy 'would be kings.'

Thank you so much for posting this horrifying information.

Like Darlene, I am shocked. I have recently relocated back to California, and I had not heard of the Ellis Act. Thank you Jan for alerting everyone. We must become vocal and active!

Obviously they can do this anywhere in CA, but it can happen in other places too. At a time when governments and their agencies bemoan the lack of affordable housing (just Google "lack of low income housing") they also allow this? As usual - speaking from both sides of their mouths.

The Ellis act exists only because the California SUPREME COURT ruled that landlords have the right not to have their property hijacked in cities that have a majority of tenants, who of course vote for rent control laws in their own selfish interest. Landlords do not have to let strangers occupy their property forever for pitiful little remuneration. Would you like the Government telling you what you can do with your own body? Why do you think landlords would like the Government telling then what they can do with their own property?

I thought NYC's rent stabilization laws were slipping away but, from I have just read SF's regs have rally taken a beating. Very surprising since San Francisco to me was the "Liberal Capital of the U.S."