I’ve just finished a column called Centuries (still to come) and I realized that there’s something missing between that one and the series I did on the music from various years back in 2011. This is it.

The decades I’ve chosen, sort of arbitrarily but rather logically I believe, are those of the 20th century.

Working forwards, starting with the NINETEEN-AUGHTIES, I give you the great SCOTT JOPLIN. 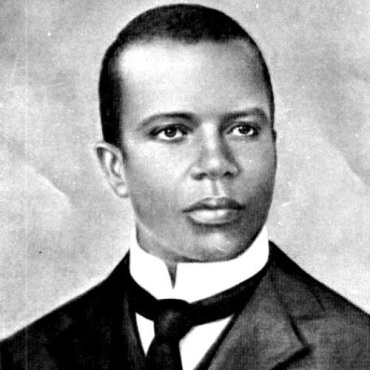 Scott was a master musician; he played (and even taught at times) the piano, guitar, cornet, violin, mandolin and other instruments. His compositions were instrumental in bringing ragtime music to prominence at the end of the 19th and early 20th century.

Besides popular music Scott also wrote an opera, Treemonisha, that’s been performed and recorded in recent times. He also wrote a symphony and a piano concerto – both, sadly, lost.

There was a terrific album from about 40 years ago called “The Easy Winners” that had Itzhak Perlman and André Previn performing Scott’s music. It’s a real gem and I recommend it to anyone interested in his music. From that I’ve taken Elite Syncopation.

HOAGY CARMICHAEL was generally a songwriter; he wrote some of the finest songs of the century. 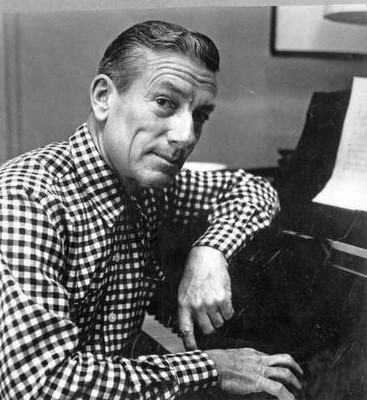 Today, however, to illustrate the NINETEEN-TEENS he will appear as a singer and not with one of his own songs.

This was written by Shelton Brooks and is The Darktown Strutter’s Ball. The first recording of this is by the Original Dixieland Jazz Band in 1917. I notice that you can hear that record on YouTube; there are a number of copies of it there of varying quality.

The TWENTIES brought forth a great diversity of music on records – country, blues and jazz all found a home on vinyl - well, shellac I guess it was. One, or three really, of those performers is the CARTER FAMILY. 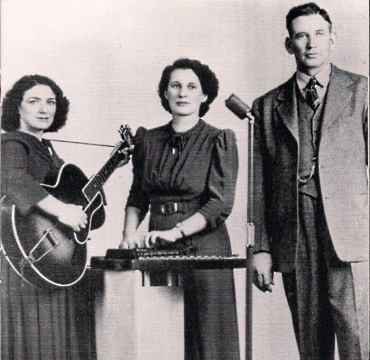 The Carters were A.P. (Alvin Pleasant) Carter, his wife Sara and Maybelle Carter who was married to A.P.’s brother who was also, incidentally, Sara’s cousin. Talk about keeping it all in the family. They all hailed from south-west Virginia.

Later A.P.'s and Sara's children, Janette and Joe and Maybelle's daughters June, Anita and Helen were added to the group, mostly for radio broadcasts. Still later, Maybelle toured with her daughters as Maybelle and the Carter Sisters.

After even more time, June’s daughter Carlene was often added to the group. Carlene is herself a fine country and rock performer. June became a solo performer and married Johnny Cash.

Back to original group with Keep On the Sunny Side.

♫ The Carter Family - Keep On The Sunny Side

The original INK SPOTS were Hoppy Jones, Deek Watson, Jerry Daniels and Charlie Fuqua. Just as they were about to become a small success, Bill Kenny replaced Jerry. 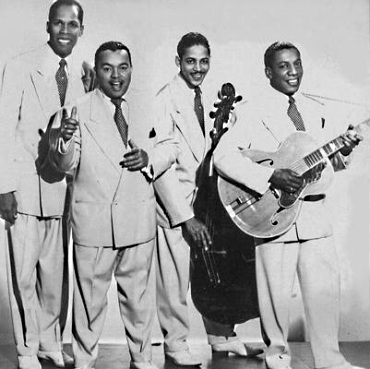 Until that time they mostly sang up-tempo numbers but in the THIRTIES Bill introduced ballads and slower songs with the distinctive arrangement of his singing lead tenor and Hoppy performing the bridge with his bass voice, often improvising the lyrics.

They became a huge success. Here is the group as we know them with If I Didn't Care.

BING CROSBY and the ANDREWS SISTERS pretty much epitomized the music of the FORTIES (if you ignore Glenn Miller, that is). 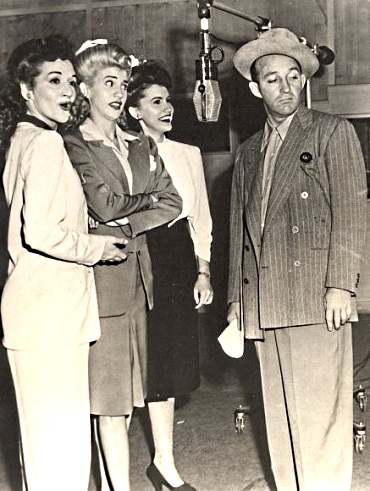 I don’t think that either Bing or the Andrews Sisters need me to tell you about them. Here they sing Don't Fence Me In.

♫ Bing Crosby and the Andrews Sisters - Don't Fence Me In

Norma, the Assistant Musicologist, suggested that Heartbreak Hotel should be the song from the FIFTIES as it changed everything forever. I agree, but I’m not using it.

Instead I’m going with a man who is the very definition of rock & roll, CHUCK BERRY. 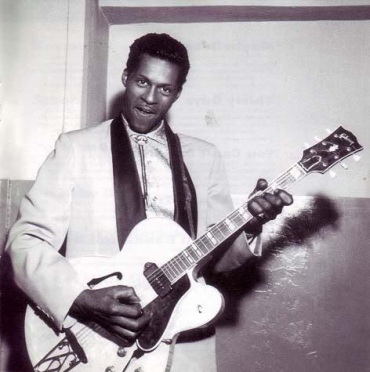 Chuck’s guitar playing defined how rock guitarists should play for the next 60 years and no doubt beyond. He was also a great songwriter at a time when these were few on the ground in his genre.

His writing was often witty and occasionally sly. He is a towering figure in popular music. Let’s listen to Brown Eyed Handsome Man.

There is one song that defines the SIXTIES for me and it’s by THE BYRDS. You can probably guess which one. 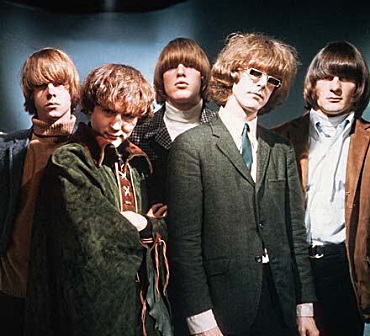 In one song you have elements of the great folk scare of the early part of the decade and the rock & roll that was the music of the second part. Besides that you have Bob Dylan’s words. Not forgetting that wonderful jangly electric 12-string guitar and the bass used almost as a lead instrument at times.

Here is Mr. Tambourine Man, one of the great records of our time.

The SEVENTIES’ song was a toss-up between The Band and VAN MORRISON. Normally, The Band would win out but I can change my mind now and then. 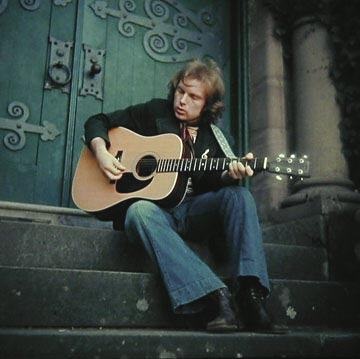 Van recorded a series of great albums in the late sixties and early seventies (as did The Band) and several more later in the decade (The Band could only manage one more great one). The song today is from “Saint Dominic’s Preview” and it’s called Jackie Wilson Said (I'm in Heaven When You Smile).

To me the EIGHTIES is the lost decade as far as music is concerned, all big hair and synthesizers. I suppose looking back, it’s not as bad as it seemed living through it but not by much. There were a few gems, a very few.

One gem was THE BANGLES who consisted of sisters Vicki and Debbie Peterson and Susanna Hoffs. They later added Annette Zilinkas who came and went over the years. 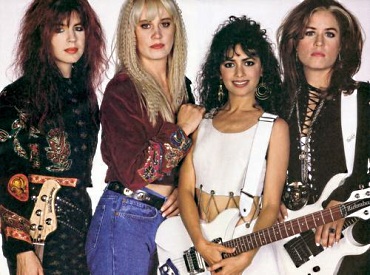 The group mostly wrote their own songs but this one was given to them by Prince (who was probably known by some arcane symbol at the time) because he had a thing for Susanna (he wasn’t alone there). Susanna didn’t reciprocate, but they still got the song, Manic Monday.

The NINETIES weren’t much better than the eighties musically (lawdy, I’m turning into a grumpy old man). I could have included Nirvava’s Smells Like Teen Spirit but thought better of it.

This decade’s music is probably even more a mystery to me than the previous one. One performer stood out for me, though, and that is WENDY MATTHEWS. 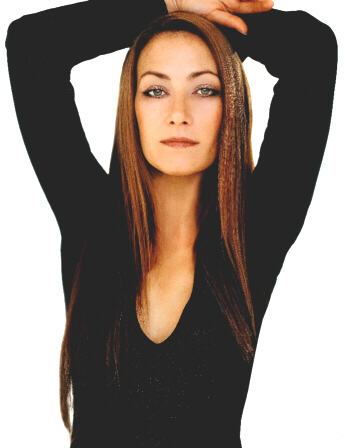 Wendy was born in Montreal and performed in bands as a teenager. She then started busking all over Canada and America, and even Mexico. One day in Los Angeles, Glenn Shorrock, lead singer for Little River Band, heard her and asked her to sing backup on a song they were recording.

He then asked if she’d like to tour with them, singing backup. She agreed and when the American tour ended she accompanied them on a tour in Australia. She liked it here so much she stayed and has been here ever since.

She does session work and makes her own albums. Tours. The lot. She’s a really fine singer. Here is The Day You Went Away.

♫ Wendy Matthews - The Day You Went Away

Good lord, Peter!!! You've provided the sound track of my life starting with songs that my grandpa used to sing to me on our Saturday drives in the Ohio countryside as a toddler to the music of my misspent youth!!!

Great selections Peter. Loved this one.

Thanks, Peter for more memories. I love Hoagy Carmichael and once thought Der Bingo was the best popular vocalist ever, but I think I matured and, although his crooning was pleasant, I will take Tony Bennett or Mel Torme over him any day now.

I can't tell you why, but I was never a fan of the Ink Spots.

You lost me when you moved into the 70's. It's probably because that's when I began losing my hearing and I became a cranky listener and was not enamored with Rock and Roll and it has gone downhill since then. I am referring to music and my hearing. ;-(

Great choices, Peter and Norma. I had a spike in choices for the 90's (having a second childhood that decade) but the malaise hit ME in the 20 aughts until I was saved by the on-line independent music-singer/songwriter movement. Now there are music niches rather than the hit parade of the masses, it seems...at least, in my listening these days. I actually think it is an improvement to what is available commercially since the 80's which appears to be mostly self promotion and advertising. Thanks for the selections and the musical meditation for my day!