Home About Archive Contact
Crabby Old Lady: A Tale of Two Blogs About Aging
Lessons From an Elder's Cross-Country Move

One of the things I do when I'm not writing blog posts is serve on the 50-Plus Advisory Board to the City Council of Lake Oswego. It's a volunteer position and the Board has no authority but it can advise and, hopefully, influence the Council on issues that affect old people in our town.

Currently, I head up a small committee that is researching the idea of installing elder playgrounds in some city parks. It's a new idea that is popular in Asia, is catching on in Europe and already there are at least 18 in Canada.

Here is a 2008 news story about a then-newly installed elder playground in Manchester, England:

”I had never heard of such a thing. Playgrounds for seniors? I was intrigued and needed to know more,” he says.

And learn he did. So much so that he has become an evangelist for elder playgrounds, founding a company, Must Have Play, that designs playgrounds for elders and after we spoke for nearly an hour yesterday, I have come to think of Michael as the godfather of elder playgrounds. With his two decades of experience in children's playground design, Michael has a lot of experience with the where, why and how of play. He says that while he liked the idea of the Asian and European elder playgrounds he saw, most were not very appealing – essentially just gym equipment plunked outdoors.

As he explained in an interview with Dr. Jill Bjerke of AgingInPlaceWithGrace blog, Michael had a richer vision,

”...influenced by my experiences building world-class playgrounds for children and by my love of gardens. In my view, providing opportunitues for elders to exercise is necessary but not sufficient. Must Have Play's designs had to address two other important design goals: socializing and playfulness.”

The three-legged stool, if you will, of elder well-being and in Michael's playgrounds even the elder-centric equipment is designed for face-to-face use by more than one person at a time to encourage that crucial social interaction – along with, of course, promoting fun.

“There's equal value in the giggle effect. Whether you meet a friend, or go with a friend, or make a friend, that's got value. I'm designing to encourage that.”

So in addition to the equipment, Michael speaks enthusiastically of the need for attractive landscaping, wide walking paths, gardens, fountains, spaces for other kinds of exercise such as tai chi and yoga, even board games and most of all, opportunities for conversation (he is a fan of curved benches).

Here's a rendering of one of Michael's more elaborate playground designs done for a space in Bellevue, Washington (larger view here): 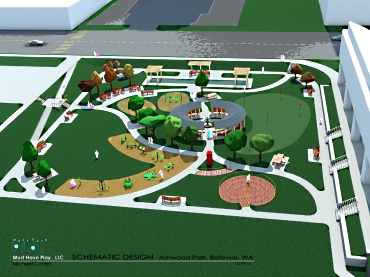 Doesn't that look terrific. If my little group can convince the City Council, our first one, as a pilot project, won't be anywhere near that large. But if it works out well, I have some more elaborate plans for other areas of town.

Elder playgrounds have not gained traction yet in the United States. There is one associated with a senior center in Rockville, Maryland [video here] and possibly a few others but there is nowhere near enough of them.

I am personally convinced of Michael Cohen's vision and that there should be elder playgrounds in every city in the United States, particularly as the elder population explodes in numbers.

The playgrounds promote general health, wellbeing, spread joy and go a long way toward warding off social isolation which, as we discuss here from time to time, can lead to depression, illness and even early death. With so much concern over health care costs, to me elder playgrounds – which are not expensive to build - are a money-saving no brainer.

You can find out more about the reasons for elder playgrounds in this report [pdf] from the International Council on Active Aging that quotes Michael Cohen at length. There is also a lot more information at Michael's Must Have Play website and in his company brochure [pdf].

At The Elder Storytelling Place today, Arlene Corwin: Out There

The concept is brilliant, though I was offended by GMA's tee-hee piece on it. I don't know about Europe, but I have seen examples in China, and they are much used. It might take some major culture change to get Americans to use them. I hope it catches on here.

I didn't much like that couch tag at the end of the report, but I hope we can all ignore GMA's offensive response and concentrate on what is, to me, such an obvious public good.

That's delightful. Most of our parks departments are so underfunded that it will take some fights for resources, but I'd sure like to see those playgrounds catch on.

We've found a little local gym where most of the afternoon crowd looks more like those elders in the clip than like young body beautifuls, so we get some of this.

janinsanfran...
In my town, we are confident that fundraising from local corporations and businesses won't be difficult and we can easily include sponsor recognition on site.

One of Michael Cohen's good ideas I like is to offer donors sponsorship of individual pieces of equipment. I'm sure many other good ideas will emerge.

What a fabulous idea potentially benefitting so many people. I hope my town considers the concept - I might have to introduce it myself.

That is a great idea and I am so glad you featured it. I had never heard of it before.

I am sadly afraid that the playground would stand empty in the hot summers here. On a 110* you would not be able to touch the equipment without getting a second degree burn so how about including a swimming or wading pool in desert areas?

I am sure that a playground would get a lot of use in the winter. We have a large snowbird population and you might have to wait to use some of the swings, teeter-totters, etc.

Wonderful idea. Sounds as if you have thought out ways to have it happen in Lake Oswego.

What a marvelous idea! There's a lovely little park/green belt about two blocks from me that I would visit much more often, and spend much more time in, if only the city would add a bench. One simple little bench so I could rest a bit, and linger longer, after I get there and before I head home. I'm sure they'd argue there's a maintenance cost, vandalism, etc.

Love this whole concept. I checked out the website for his company. I like the designs in general, but there are some real limitation that I see for the practical use by folks who are aging. I actually sent him a note about it. We'll see if I receive a response. Thanks for sharing this!

I am grateful indeed to Ronni for writing about me and my vision about playgrounds for elders. And I appreciate all the comments. I thought I would respond to Carol's criticisms here, because the issue she raises is so important.
Carol notes the typical lack of grab bars, arm rests, and other handles on benches and exercise apparatus. Many/most elders, Carol notes, need these devices to assist them in standing and sitting.
She also makes the point that the height of seats is often too low for tall people, making arm rests/grab bars even more necessary.
(Her email was more eloquent.)
Carol, I agree 100% with you. Thank you for pointing this out. This feedback is very important and useful to me, given that this is a very new and largely untried phenomenon.
Most of the exercise apparatus you can see in our designs and on our website are by other manufacturers. We would need to adapt it to our needs. I have not tried yet to ask manufacturers to redesign their products, although I am beginning to develop that relationship with one good company, Xccent.
We are in the process of replacing many of the manufactured exercise elements in our designs, and it is a good time to include these modifications, at least on screen.
I see that even our own bench design needs more armrests. We are on it!
Thanks again.

Wonderful stuff! Playing and playfulness are a delicious aspect of life at any age. I am so glad to know of these developments, Ronni. I enjoy giving workshops on playfulness and the art of aging and am very aware of the wellness benefits of playing for elders. Hope that playfulness expands-- minus the condescending smirk of those dolts who see it as another opportunity to express their ageist attitudes. Play is at the core of all creativity and pleasure. Refreshing and full of new experiences at any age.