A recent report estimates that in 2010, people older than 60 lost $2.9 billion to financial exploitation, a 12 percent increase from 2008. The numbers are undoubtedly much higher than can be counted because due to embarrassment, it is one of the country's least reported crimes.

Most perpetrators are trusted professionals and family members but strangers are responsible too via scams, swindles and fraud. Whatever the source, cheating old people out of their money is growth industry because the number of elders is increasing; crooks believe they have a lot of money; and it is a low-risk crime due to that embarrassment factor.

It has bugged me for years that conventional wisdom, along with the FBI and other organizations, assert that elders fall victim to scams more frequently than younger people.

Why should they? In fact (thought I), with age comes experience and many elders have probably been burned enough times by unscrupulous people to be more alert to it than those with less experience.

It all sounded like a case of ageism to me or at best, that what is not included in elder scam reports is that victims are cognitively impaired to a greater or lesser degree.

Now, if two new studies from UCLA are accurate, the FBI is correct about larger numbers of elder scam victims and the reason supports my suspicion of impaired cognition if not in the way I imagined.

”Older people, more than younger adults, may fail to interpret an untrustworthy face as potentially dishonest, the study shows.

"The reason for this, the UCLA life scientist found, seems to be that a brain region called the anterior insula, which is linked to disgust and is important for discerning untrustworhty faces, is less active in older adults.”

As the writer Stuart Wolpert explains, younger and older adults react similarly to faces judged to be trustworthy or neutral. It is with viewing untrustworthy faces that the differences showed up. With the use of functional magnetic resonance imaging (fMRI) brain scans,

"In younger adults, the very act of judging whether a person is trustworthy activates the anterior insula," said Shelley E. Taylor, a distinguished professor of psychology at UCLA and senior author of the new research.

"It's as if they're thinking they need to make this judgment with caution. This gives us a potential brain mechanism for understanding why older and younger adults process facial cues about trust differently.

“Now we know what the brain sees, and in the older adults, the answer is not very much when it comes to differentiating on the basis of trust.

"It's not that younger adults are better at finance or judging whether an investment is good; they're better at discerning whether a person is potentially trustworthy when cues are communicated visually.”

Professor Taylor says the “prototypical victim” is a 55-year-old male who is an experienced investor (although I've read elsewhere that an 80-year-old woman is typical). Taylor notes that for her, this study is personal: both her father and her aunt have been victims of financial scams.

Here are two images from the study. The young adult brain is on the left, the old adult brain on the right. 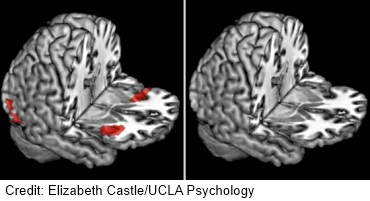 Taylor says that one of the functions of the anterior insula is to sense body feelings and interpret such visceral cues. “This is the response that we see lacking in older adults.”

That could be called a kind of cognitive impairment but it's not the sort I had imagined - of an elder's day-to-day reasoning deteriorating.

So it seems my arrogance was showing in believing that my brain is healthy enough that I could not fall victim to a swindler. Now I know better. We are all vulnerable and these studies are a good warning to be careful.

You can read more about all this at the UCLA Newsroom website.

Here are some good online resources where you can learn about known scams, swindles and frauds that commonly target elders:

I heard about a scam on the elderly on the radio a few months ago and thought "how in the world would anyone fall for that?"

A co-worker told me just this week that her mother in law got scammed and it was the exact scam that was on the radio.

Apparently someone will call and say that their grandchild is in danger, in this case her grandson was in Mexico and caught by some drug dealers. They told her she had to wire $2,000 to them and to not tell anyone or else her grandson would be killed. She wired the money and they called back saying they needed another $1,500, which she dutifully sent. THEN, they called and said they now needed $40,000!!! My co-worker's MIL went to the bank to draw out the money and a wonderful teller, who knows the woman, was cautiously questioning her, saying this was an awful lot of money to take out in cash. The teller asked the MIL to call her son and while on the phone the MIL cautiously asked how her grandson was doing and her son said he was fine. She then realized that it was a scam.

Of course now the whole family is in a tizzy and very worried about the MIL and her mental capabililties and are now having a family discussion about putting a limit in how much money she can withdraw before it needs another family member's signature.

Unfortunately I know two people who were taken by the "your grandchild is in danger" scam. One was 88 and the other 73 and considers herself very tuned in. Neither of them called the parents of those children. The younger one was so embarassed she told no one but me and refused to call the police or warn anyone else. The elder woman has a grandson who was actually in Mexico at the time. She was very mad and told everyone about her experience. It's very sad.

The part about discerning untrustworthy faces was very interesting. Living alone I have gotten my kids involved in helping me select people to work on my house. In this small burg my DIL knows most everyone as well which doesn't hurt. I am sort of in transistion accepting that I need help at times. I hope not to find out in such a cruel way.

I guess we just have to realize that our physiological limitations extend to the brain & judgement. I will have to tell myself that all may not be as it seems and check things out more carefully-even though I've never been a good judge of people so nothing much will change.

Having already assumed that scammers will try to take advantage of me, I'm usually hyper-vigilant -- especially since I've always tended to be gullible around "nice" people. (Just because someone is friendly and conversational doesn't mean they aren't trying to sell me something.) I'm afraid I've probably offended some people by being suspicious or even rude when it wasn't warranted. I'm bolstered by knowing there is a biological element involved here.

Given the fiscal collapse of 2008 and the failure of Seattle-based Washington Mutual Bank, I am one of the least trusting people on the planet.

Since much (or most) of the attempted scams are via telephone, I don't answer any 1-800 calls. Even if the call is not a scam, it's just plain annoying.

I also never hire anyone who knocks on the door to do a home-repair.

Maybe this failure of the disgust/distrust response is also why elders tend to be mellower than they used to be.

My husband (a former police officer many years ago) taught me to keep my anti-scammer antenna up at all times. We rarely take phone calls from people we don't know and are highly skeptical of anyone (known or unknown) who asks for money. If our grandkids get in a jam, it's their responsibility (or that of their parents) to deal with the situation. I get references from friends/acquaintances or go to a well-respected subscription List before hiring a contractor. I could still get taken, but not easily!

This study emphasized 'visual' cues, which are absent on the phone or online. I can't help but think people who fall for these scams are suffering some loss of reasoning ability.

There are numerous places a person's age can be found, so I also suspect the incidence of older people being scammed is because more of them are being targeted.

Hi. While I've never been scammed I always fear that I might be. I think it goes to the trust we have in people. If you remember, we used to leave our houses and cars unlocked when we left. Nowadays, we just can't believe other folks would take advantage of us. Glad the authorities take this seriously and monitor and announce when they become aware of the latest scam. Thanks for this article.