I don't usually write introductions to Saturday's Interesting Stuff; most of them stand on their own. But I've been gone from the blog for a week and today's collection is, this one time, a bit different.

For one thing, it's shorter – fewer individual items. For another, at the end – a longer video than I usually post. And most of all - all five, each in its own way, are about liberty (what the state grants) and freedom (one's innate agency to do as one wants).

Not all of it is as serious as that makes it sound but writ large and small, the five embody those values.


DANCING YOUR HEART OUT

Thanks to Jeanne Waite Follett of the blog Gullible's Travels, we have this 88-year-old feeling free enough to have a fine ol' time dancing down the stairs to a favorite old song from 50 years ago.

Here is what you must do: so that it's not merely another cute old-woman video, watch the whole thing and perk up your ears for the final two seconds. It's her punch line makes all the difference.

No one is saying if they are the oldest in Amsterdam, but with a 50-year career behind them, Louise and Martine Fokkens are the longest-working prostitutes there. 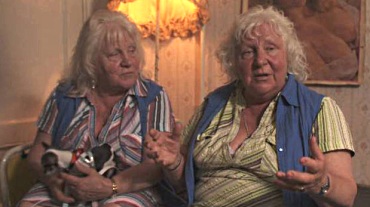 As they told the Canadian Broadcasting Company, they are proud to have run their own business.

”'We like to work in the red light district,' said Louise in broken English. 'You had fun, we know a lot of people...the American boys, the Canadian boys, the German...every country come there.'

“Asked if they will miss the work, the sisters said they would. Louise said working makes her feel younger, and Martine said she misses it because it’s sometimes nice to be your own boss.”

You can read more here and a hat tip to doctafil of Jive Chalkin' for send the item. (You know, of course, that prostitution is legal in Amsterdam, right?)


ONLY KNOWN FOOTAGE OF MARK TWAIN

In his book, A Connecticut Yankee in King Arthur's Court, published about 25 years after the American Civil War ended, humorist Mark Twain – aka Sam Clemens – said:

”Men write many fine and plausible arguments in support of monarchy, but the fact remains that where every man in a state has a vote, brutal laws are impossible.”

More than 125 years later, we're still working on that. Here is the only known film footage of Twain which was shot by Thomas Edison at the Twain estate in Connecticut.

You remember Desaline Victor, don't you? The 102-year-old voter who stood in line for hours to vote last November and who received a standing ovation at President Barack Obama's State of the Union Address in January? She explained how women could not vote when she was young. She explained the many hours she stood in line to vote last November. She noted the states during this last presidential election season that tried to limit voting. And then she wrote, in part:

”...we need the Voting Rights Act. Justice Scalia, the Voting Rights Act is not a racial entitlement. It is an important protection that helps all Americans exercise their right to vote. It was put in place because, sadly, there are people in this country who don’t want everyone to have an equal voice at the ballot box.

That's the title of a short film featuring some results of work being done by the Northeastern University School of Law's Civil Rights and Restorative Justice Project to investigate cold cases of racial murder in the south.

This came from Jan Adams of Can It Happen Here? And this is what she, more eloquent than I am, wrote of the video:

”It's the story of young law students working with elders and communities in the old South to come to terms with brutal murders, often of their family members, that they witnessed in the 1940s, 50s and 60s.

“Many of us are vaguely aware that white supremacists killed without fear to enforce the social order that benefited them before the civil rights revolution. This gives us a chance to listen to people who were there.

“The witnesses will not be with us much longer...But while there is time, some justice and some healing remain possible. The stories both horrify and inspire.”

As I said above, this video is longer than I usually post – nearly 17 minutes. It is important to watch and to remember. It is narrated by former chairman of the NAACP, Julian Bond.

First video, an inspiration to us all. Forever young!

HaHa. The Fokkens sisters. What a life they've had. I think too often when people see kids they think of their potential and their future but when the same people see old people they see them as frozen in time-just old-as if they were never young or never had a past life.

I wondered who would be the first to mention the Amsterdam twins' name. It's a fitting button to the story, isn't it.

the dancing is delightful, but I am very moved by the last film. Thanks.

The last video was very powerful, and a reminder that this history is not that far behind us, if it is behind us at all.