I don't want to tell you too much; you should discover this video for yourself as I did when I received it from TGB reader Karen Kennedy. All I will say is that it is titled 5M80, I have no idea what that means and the creator is someone named Nicolas Deveaux.

The video was created in 2011 and there appears to be more information at Les ateliers Orange but it is in French of which I'm ignorant. If you read that language, maybe you will share what you learn with us in the comments.

You already know if you're myopic or not but this vision test is still fun. If, while sitting at a normal distance from your computer screen, you see Albert Einstein, your vision is good. If you see Marilyn Monroe you should probably be wearing corrective lenses. 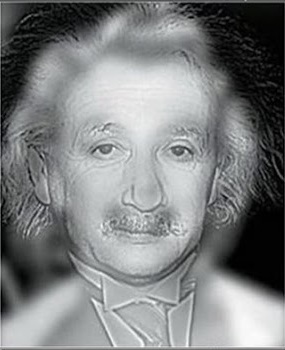 If you see Einstein and want to see the Monroe image, step back from your computer screen by a couple of yards/meters.

This hybrid image was created by Dr. Aude Oliva for the March 31, 2007 issue of New Scientist magazine.

It is hard to know where such an idea as turning old books into landscape sculptures comes from but it does exist. 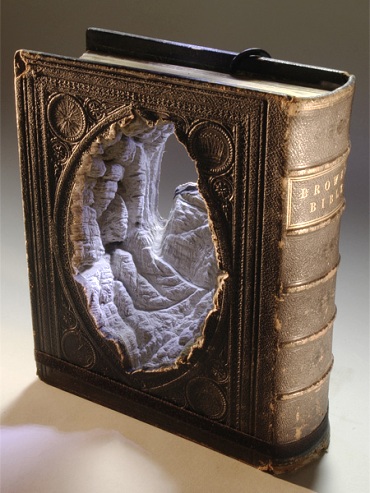 Nikki Lindquist who blogs at From Where I Sit sent the link to Canadian artist Guy Laramee's website where in a video, even he can't say how the idea came to him.

You can see more of Laramee's book sculptures here.

One of the first things I heard when I arrived in New York City in the 1960s was that even if your interest is one in a million, there are seven more people just like you in town. That's more true on the internet - no matter how obscure something is.

I wasn't looking for more, but soon after Nikki told me about Guy Laramee's book sculptures, I found U.K. artist Su Blackwell's. She uses books and paper in a different way that is no less odd and compelling. Take a look:

You can find out more about Ms. Blackwell and her work here.

Last week we had a good discussion about old age sex and a couple of days later I ran across a short article from a writer name Amit Wehle. He doesn't say how old he is but it's clear he still has a long way to go until he's old.

Nevertheless, he is seeing changes in his libido and he eloquenty laments the loss of the morning woody he has been accustomed to:

”...I miss my old morning mate for what he represented: me as the sexual being. Me, the potent mammal. A reminder that despite being nearly buried beneath life’s responsibilities and fears, I still rise with a throbbing pulse. I’m hard, therefore I am,” writes Wehle.

“Sure, it may be a bit caveman and one-tracked, but it’s strangely gratifying. These days — and I suppose in all the days yet to come — the evidence will be a little more watered down.”

Go read the whole thing at The Date Report. It's nicely done and worth the time.

It was a big week at the Supreme Court for gay marriage. My favorite moment was when Justice Ruth Ginsberg (an elder, don't forget) described current law on the subject as “skim milk.” In June, we will learn the Court's verdicts on the two cases.

Meanwhile, everyone says it is remarkable how quickly popular support for gay marriage has grown in just a few years. Remarkable in every age group, that is, except elders. From the Washington Post [my emphasis]:

”In the Post-ABC survey, a slim majority of Republicans and GOP-leaning independents younger than 50 now support gay marriage. Nearly seven in 10 of those age 65 and older oppose it, but that number was more than eight in 10 as recently as 2009.”

Here is a graph from Pew showing the change in attitude by age group:

Jeffrey Toobin in The New Yorker:

”Once a society decides that the law must treat a group of people equally in one area of life, it becomes harder - and, eventually, impossible - to justify discriminating against them in others.”

I've spent more than half a century working to keep my weight under reasonable control and I know a lot about doing that.

One of the silly games I've played over the years, is to scare myself about how much space a pound of fat (or five pounds or 10) takes up on my body by extrapolating from the size of hunks of meat at the market.

Now Buzzfeed has put together a video to show us what 2,000 calories looks like in various foods. (Most nutrition experts tell us that men should, on average, eat about 2,000 calories a day. Women, somewhat fewer.)

Even though computers have taken over, the paperless office hasn't yet materialized and the humble stapler is still a necessity. I've had mine for – oh, probably 40 years and it works as well as when I first got it. 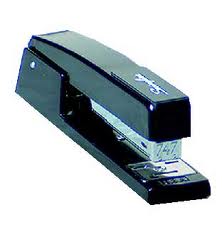 One of the things I like about The New York Times is that they regularly make space for feature stories about ephemera – in this case, recently, the stapler and its history. Who knew this:

"Stapling devices have existed since at the least the French court of Louis XV. But before Mr. Linsky’s time, staples generally had to be laboriously loaded, one by one, into the rear of the stapler."

Times reporter Phyllis Korkki tells us that Mr. Linsky, in 1925, founded the Parrot Speed Fastener Company, later renamed Swingline – the brand of my stapler and just about everyone else's.


ANOTHER GIRAFFE – A BRAND NEW BABY

Just a week ago, in the early hours of March 22, this beautiful baby giraffe was born at the LEO Zoological Conservation Center in Connecticut – a welcome and happy event because she is an endangered Rothschild giraffe, native to Africa, of which only 670 remain.

That's important but right now, we have the wonderful awww moment of the baby taking her first steps as mom coaxes and reassures her:

LEO Zoological Conservation Center is a non-profit refuge for rare, threatened and endangered animals, with a focus on breeding species at risk. You can find out more at their website.

That first video is mind-bending. Strangely mesmerizing!
Love the baby giraffe too.

All I had to do to see Marilyn was take off my glasses. And the wonderful giraffe video. I love the Saturday Interesting Stuff! :-)

The Orange workshops of the creation return with Dailymotion! You have the idea of the year: inspired, lucrative, political, playful, free, fleeting, fragile, hilarious... but especially imagined for all the screens. Producers and independent creative: to your gray cells!

Re 5M80, 5 meters 80 centimeters is the approximate height of a giraffe. Fabulous video -- but it can't be real, can it?

LOVE all the giraffe stuff; real and unreal.

The Su Blackwell book sculptures are pretty cool, I think. Neat music, too.

I, too, love your Interesting Stuff!

What creative use of paper that would otherwise clog a landfill. The birds and flowers must have taken many many hours to create. I admire the patience of both artists.

I loved the giraffe videos. Both were wonderful in different ways.

All of today's Interesting Stuff is fascinating, but the Magical Giraffes tops them all - wow! You know it is digital but how ever do they do it?! I'm sending that to the grandkids.

And even more book sculptures, these by Brian Dettmer. http://bit.ly/g9D7Ym

I've shared that magical giraffe video with everyone in the family - thanks for the smiles!

What a fantastic assortment, Ronni!

Never have understood My Generation ("Silent") when it comes to gay marriage! If a person--gay or straight-- wants to marry the person they love, why not? It doesn't change my marriage in any way. As far as the so-called Gay Agenda the right wingers are so worried about, it's highly unlikely that the approximately 5-7% of people born gay are going to take over the world. So I agree with you, Ronni, in urging fellow elders to open their minds on this issue. Sure, it's a different concept of marriage than what we were raised with, but none of us were raised with Twitter, Facebook, smartphones or computers, either!

I love giraffes...so 2 videos in one post is awesome!
Why does the generation which was on the forefront of the civil rights movement have such trouble with the issue of same sex marriage rights? I just don't understand it. I am a few years from 60 and it seems like this should have been settled long ago. I just don't understand the resistance from the "older/boomer generation.

Regarding the mainstay of all office equipment, the stapler ... I still have some copies of my grandfather's letter from the early 20th century. These copies of the letters are on onion skin and hooked together with straight pins !!

The Giraffes were marvelous.

As for the elders and the gay thing, I r an elder and I have been fighging, not only for same sex marriage, but for EQUALITY for all. Makes zero sense to me that two people in love who want to commit their lives to each other can't do it legally because of a plumbing problem. Marriage is NOT about procreation, or none of us over the age of 50 would be allowed to marry. Like someone else here said, grow up, people!

I so agree with Ms. Rogers comment....who cares who loves who....it is not my business to judge. :)