Let There Be [Elder] Light

The National Cathedral in Washington, D.C. is more formally named the Cathedral Church of Saint Peter and Saint Paul. It is also sometimes called “the national house of prayer,” the Episcopal church where many presidents have worshipped and where presidential funeral and memorial services are sometimes held, most recently for Gerald Ford.

It took 83 years to build the cathedral – from 1907 to 1990 (it is currently undergoing repairs of extensive damage from the 2011 Virginia earthquake) but the artwork continues, particularly stained glass windows.

One of the finished windows, an abstract depiction of the godly creation of light, is the west rose - often used as the trademark of the cathedral. Queen Elizabeth II of England attended the window's dedication in 1977, with then-President Jimmy Carter. 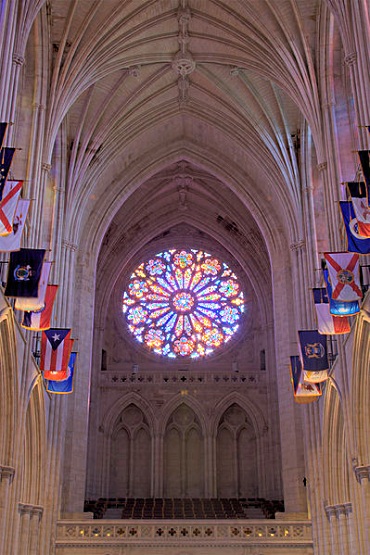 The man who designed this stunning window is Rowan leCompte and now there is a full-lenth documentary film about him that details the making of stained glass, the nature of lifelong collaboration and the creation of what is, due to advancing age, leCompte's final commission for the National Cathedral, his 45th.

That is not a typo. There are more than 200 stained glass windows in the Cathedral and Mr. leCompte designed – yes, 45 of them.

The film, Let There Be Light, is the story of two old men - a great artist and a master craftsman – who, as producer, director, editor Peter Swanson explains, struggle against time to finish their last work together.

”The project was initially intended to take one year and be ready for the 2007 centennial celebration of the cathedral’s founding,” says filmmaker Swanson. “Rowan was to design and paint this enormous window and Dieter [Goldkuhle], his long-time collaborator, was to select and cut the glass and do the leading and installation.

“Born in Germany, Dieter is a gifted craftsman who has fallen in love with glass and light. A visit to Lambert’s Glassworks in Waldsassen Germany illustrates his respect for the medium and the people who make it.”

We, the audience, get to follow Rowan and Dieter through the stages of development of their monumental undertaking, a fascinating and engrossing journey.

But for me, the most gratifying part is to hear these two accomplished elders talk eloquently about their passion for glass and light and color and how they each do their part to execute the vision of the window:

Circumstances require that Dieter Goldkuhle resign before the project is finished. A replacement is found for him – a woman this time. She finishes the window and then works to resolve a conflict that erupts when the Cathedral board unexpectedly rejects the window.

This is a splendid documentary about the art and craft (it is both) of making stained glass but more than that, the story of two gifted elders nearing the end of their obviously satisfying careers and discussing with ease the experience and expertise they use in their final project together.

Peter Swanson's film, six years in the making, just won its first award – best of the festival at the Washington, D.C. Independent Film Festival. It deserves to win more.

Here is the official trailer for Let There Be Light:

You can read more about the film, its making, the filmmaker and the artists at the Let There Be Light website.

This lovely jewel of a movie, narrated by Garrison Keillor, is worth seeking out. DVDs are available here.

At The Elder Storytelling Place today, Chuck Nyren: I Lost My Glasses

Our son is a stained glass artist. This post is on the way to him; he'll be very interested.

I love stained glass, used to make residential windows at one time. Light through glass, just amazing. Plus I love hearing of anyone who managed to make a living with their creativity and art.

Thank you for telling us about this fabulous movie.

I love your title "Let There Be [ELDEER] Light. Indeed !!!

This was also the location of the most breathtaking of all the scenes from the series most loved by all writers, West Wing--the episode in which the President's old friend and secretary dies senselessly in a car crash, and after her funeral he moves slowly, in isolation, down the central aisle of that church, cursing God in Latin.