Home About Archive Contact
If You Could Live Your Life Again
ELDER MUSIC: Country Chain Part 2

Colleen Skinner of Meanderings was the first of half a dozen readers to send this video. What's to say but Wow – not what I expected at all.

One of the commenters at the YouTube page wrote, “I found out my grandmother played the guitar by reading her obituary.” If you've got a hidden talent that would surprise your grandkids, you might want to tell them about it now.

There is another video of this unidentified grandmother and a bit more information at Gawker.

Frontline and ProPublica have put together a documentary on assisted living homes in the U.S. that will be broadcast on many PBS channels next Tuesday 30 July. Here's a promotional video. It's a bit too sensationalized for my taste but that doesn't mean you shouldn't make time for the program:

You can check your local listings here or the full documentary will become available for screening online at 10PM eastern time on Tuesday on this page.

Now isn't this the cutest thing: 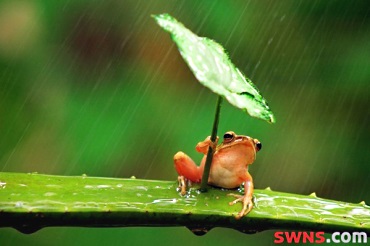 “I couldn’t believe it when I saw one hugging the leaf and using it like an umbrella. I was a bit shocked that a frog seemed so scared of water but it was very overcast and drizzly – he must have been trying to protect himself.

“He stayed there for almost 30 minutes and hopped away after the rain stopped suddenly.”

I'm still not sure this isn't a Photoshop stunt especially after seeing this shot: 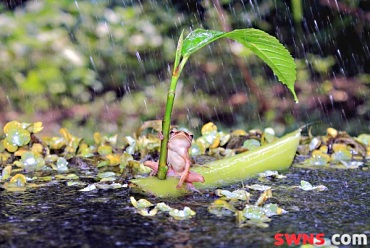 You can read more here and decide what you think about it. Fake or not, you have to smile.


MUSIC FROM A PARAGUAYAN LANDFILL

Wait till you see this video of an orchestra in Cateura, Paraguay using instruments made from landfill trash:

A full-length film is being produced about the orchestra thanks to a successful Kickstarter campaign that raised much more than the $175,000 goal before the 14 May 2013 deadline.

You can learn more about the “landfillharmonic” here. (Hat tip to John Starbuck of For a Dancer)


NO CELL PHONES IN CHURCH

And this church really means it. (Hat tip to Darlene Costner.)

Lots of houses have fences. There are so many we hardly notice them. Believe me, no one will ignore this fence at a home in Turkey. A glass tank 165 feet long housing thousands of fish including a bunch of octopuses (octopi?). Take a look.

Although I didn't stand in line at bookstores waiting for midnight book releases, I was (still am) a Harry Potter fan as eager an any 10-year-old for each new installment. 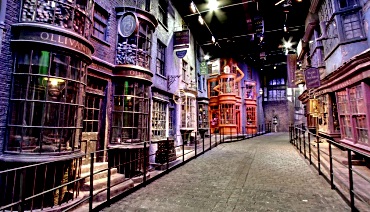 That's Daigon Alley, the wizards' shopping center in Harry Potterland now in Google Street View. Here's another shot of it: 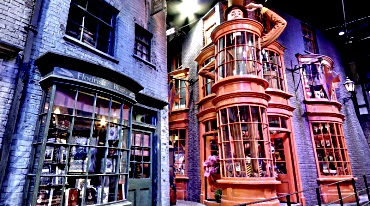 You can “walk” down Daigon Alley and peer in the windows at Google Street View – it's much more fun when the photos are full screen.

The street, along with Dumbledore's office and other locations within Hogwarts school can be visited at the Warner Bros. Studio in London. If you don't live there, you can read more here today.

If you believe the hype, the best new beauty treatment is to allow snails to crawl all over your face.

I guess you need to overcome the ick factor but it won't be me; I have zero patience for this sort of crap. Nevertheless, it's been all over the web this week and I thought you might want to see it. There is more to read here.

After those snails we need an antidote and Lauren Nelson of perPETuity supplied just the thing - a video compilation of tired baby animals.

That's all for this week.

How exciting - that's my son AC Thompson - the reporter for Propublica and Frontline. We all need to see this and read the articles that accompany it on Propublica - nearly 2 years of work went into this report.

Oh, Ronni, you must not be a true Harry Potter fan! It's DIAGON Alley, not Daigon.

Wow! Grandma really rocks. Gene Krupa would be so proud.

It is amazing and heartwarming to see that people can overcome obstacles and find a way to fulfill a dream. Making instruments out of trash is the pinnacle of recycling. Kudos to those kids.

And the sleeping animals is such a sweet video to end with.

I will SO skip the snail "beauty treatment". I have an ample supply in my flower containers (despite anti-snail remedies), and they're enough of a nuisance there! Bring them in the house and put them on my face? I don't think so.