EDITORIAL NOTE: I met Jonathan Wang back in June when he contacted me about an ebook on fitness for elders and arranged a giveaway of the book on TGB.

Jon is a smart, young entrepreneur - managing partner of The ScaleUp Group with clients who specialize in building technology for elders. While working on the ebook, we found that we have interests and ideas in common, so we've kept in touch.

And now, Jon has written this lovely story about his grandfather, about differing cultures, about food and about how family stories are made.

By Jonathan Wang who blogs at his About.me page.

I remember breaking bread, literally, with my gramps when I was in the fifth grade, back when he visited our house in southern California.

He had just retired from his lifelong career as principal at one of Taiwan’s largest elementary schools and now, instead of dealing with 10,000 kids, there was only myself and my sister.

Whenever he came to our house, the kitchen was littered with flour, grains and baking pans. You see, my grandpa grew up on a farm in Jiang Su, China and unlike the other type of Chinese people who predominantly ate rice, he was accustomed to eating steamed bread, or filled buns. 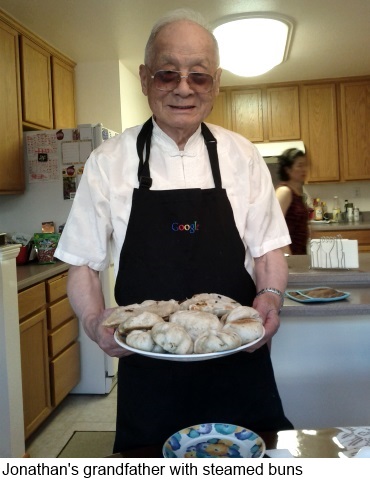 I am the third type, American-born from Pennyslvania, so I eat pizza.

My grandfather had never eaten pizza before he met me and once he did, our worlds collided - for better and for worse. Better in the sense that he now had a fool-proof basis to connect with us grandkids but worse because of his kitchen experiment that became known as the Chinese Pizza.

My grandfather realized early on that the same sauce used on pizza was similar to the sauce used in pasta, such as marinara, alfredo and pesto. Therefore, his sauce component came from one of our leftovers, a dish called ZhaJiangMien, which is this black looking soybean paste mixed with ground pork.

I know this marketing description leaves much to be desired, but I promise that if you’ve never had it, it tastes great - on noodles.

For his pizza toppings, Gramps knew that the little round red circles that were so popular with kids was just pork sausage so he found an equivalent format inside a box of chinese-style sweet pork jerky.

Thankfully, we didn’t have anything analogous to mozzarella but to add a touch of class he sprinkled a little bit of dried seaweed and sesame.

Proving that some things just don’t really go together, it was the worst thing. This was certainly one of those cases where the whole was not greater than the sum of its yummy parts.

I managed to make it through more than half of my own personal pan pizza and soon after, the Chinese Pizza mysteriously disappeared as quickly as it had originated that afternoon - never to be made again.

This year my grandfather turned 90. I could not be happier to have known him for this long and counting. As awful as I remember that pizza to have been, I’ve come to appreciate that that event was in fact a privilege, a moment of bonding between grandson and grandfather that was only made possible against all odds when he successfully fled from the communist party in the early 1940’s.

During that time, he hid from village to village, eating out of horse troughs in order to survive the journey. My one and only gripe though, I just wish he had just told me all this before I had to eat that Chinese Pizza. 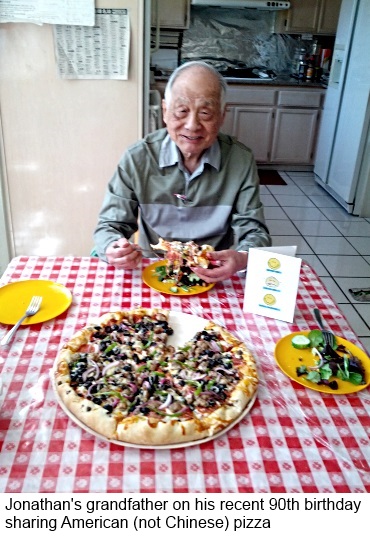 Thank you both Jon and Ronni for sharing these joyful moments with us.

Sometimes its the little events that don't work that bring us closer to our loved ones. I made a peanut pizza once trying to avoid meat. Now I make homemade with meats and even though it is and thirty five years later both my sons while eating it will sometimes say "remember Mom's peanut pizza/" and laugh like crazy. Good memories.

Sweet story and a lovely tribute from Jonathan to his grandfather.

Lots of love to Grandpa...
xxx/ooo

Such a lovely story. Thanks, Ronni, for sharing it.

What a wonderful story. Thanks for sharing.

This is a wonderful and touching account of a family's different cultures and generations coming together.

Beautiful! Pass along my deep respect to your grandfather, for his courage as a young man, his inventiveness, and I'm sure his sense of humor.

A much loved elder brother-in-law turned 92 today, and is treasured by us in the same way you treasure Grandfather.