How to Accept Our Aging Bodies – Part 1 of 2

As, over the past months my weight loss program, reinforced by the daily workout routine, has borne fruit in greatly reduced body size, I have been thinking about the changes age brings to our bodies.

That reminded of a blog post from more than six years ago about old bodies and the undeserved poor reputation our culture places on sags and bags and wrinkles and bulges that come with advanced years. In re-reading, I found that I like it a lot.

So have a read of this 2007 post (slightly updated for timeliness) and tomorrow we'll discuss all this further.

Michaelangelo’s David must be the prototype, don’t you think, of outstanding male beauty. He’s gorgeous. Handsome, muscled just enough and not too much, sensitive hands, firm thighs. In the 500 years since the David was so exquisitely sculpted, no one, in art, has matched his ideal.

Youth is exalted as the quintessence of human beauty. No one can resist it and why should we? A flawlessly rounded shoulder, the sensuous curve of a buttock, a young woman’s uptilting breasts, skin as smooth, still, as a baby’s bottom.

These days, there isn’t much meat on the bones of young women who are considered beautiful, but that wasn’t always so. Rubens is well-known for his “Rubenesque” bodies and Renoir, in this painting, was portraying the epitome of his era’s idea of comely, young womanliness.

My friend, Israeli artist Sali Ariel, was bucking the modern, skinny trend in female beauty when, in 1999, she made a series of womanly nudes in the Rubens and Renoir tradition.

I’ve never seen a painting of anyone as thin as top runway models, but I don’t think they could be as sexy as Sali’s woman. I own a framed set of these charcoals clustered on the wall in my office space and never tire of them.

It is right when hormones are raging and fecundity is in bloom that the young should be so beautiful. But that does not make age ugly or unattractive. Only different. And, frequently, more interesting. It is wrong to judge age by the standards of mere youth.

British artist, Lucien Freud, who died in 2011, made almost a career of painting himself in unforgiving detail as he has aged. (And everyone else he painted too; his 2001 portrait of Queen Elizabeth II has been roundly criticized.) I can’t find an image of one of Freud’s full-body paintings, but this head will give you the general idea.

Michaelangelo’s David is sexually breathtaking but Freud’s self-portrait is fascinating. What living could have given him this face? It is said, you know, that he fathered 40 children.

Many of the old masters painted old people. This one by van Gogh is as honest in its way as Freud’s. Is she sad? I don’t think so. Maybe she is tired and wishing ol' Vincent would be done with it for the day. Or lost in thought, perhaps. She does not look at us.

Whenever I see old, old people, those who have lost the attachment to pretense of youth our culture relentlessly demands, I spin stories to myself of the lives they have lived and wonder what magnificent memories will die with them.

There is dignity in this sculpture by Auguste Rodin – “The Old Courtesan” – of a woman who had once been a professional model. 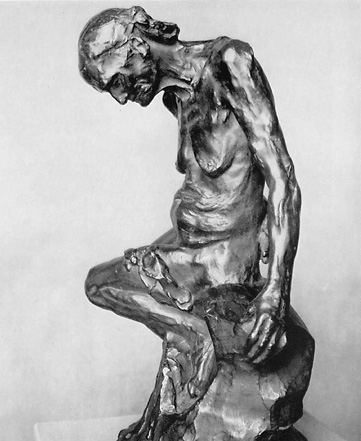 It portrays the inevitable decline that comes to all men and women and is, in its truthfulness more penetrating than the David. There is more to wonder about in this, more to know, more to contemplate.

Youth’s beauty is easy to look at. It is about uncomplicated potential that may or may not develop. We like it for its clarity, its obviousness and its simplicity. There are no mysteries in youth and that is sometimes refreshing in itself. 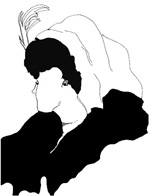 Ah, but age is intricate and complex, made from decades of accumulated knowledge and experience compounded with the folly and error no one escapes. It is hard for us to confront, with its intimations of death, more difficult to behold. Can you see the difference in this well-known optical illusion? Youth and age, one no better than the other. Only different.

[To Marie Grosnay] “No doubt you were extremely beautiful as a young girl, but your youth could never compete with your age now.”

Lovely post! Thank you, Ronni! I had never seen that Rodin sculpture. It is quite compelling!

I've been told I should smile more. Pain often makes that difficult. I can't help but notice that not only are our bodies sagging but our heads as well. The art about the elderly always seems to portray not only a time-worn body, but also a broken spirit.

What would Freud have looked like in his self portraits if he painted himself smiling? What would the old courtesan looked like had she been sculpted with her head held high? When we see ourselves joyful even in our aged bodies, it may very well change the way we think of aging.

Many many people age very well and look their best in the years where youth is considered past - 45-70. Sexual beauty isn't the only kind out there thank heavens!

Oh my.....beautifully written!!! And so timely....I'm 70 and feel I'm beginning to age more gracefully. Bless you all.

Gee Ronni, Ever so many thanks for that post! Having seen 'David' there aren't too many of him around even at 20--25! And as far as Lucien goes, he does paint a 'mean' portrait--doesn't he? As we age I think we should all consider ourselves as fine antiques. Let's face it--would you ever even think about buying a pricey antique if it didn't have dents, scratches etc. on it? And at 85, I'm definitely in the antique mode!

Marcie is onto something. The seemingly sad depictions of old age, I think, are the artists' lamentations about the cruelty of time. As Marcie said, a smile or proud posture would have completely transformed these two works. After all, there is only one alternative to growing old.

Some things are timeless. Becoming elders often means giving more time to changes or attempts to reverse the effects of previous neglects. Beginning a fairly rigorous exercise regimen this year made me consider my posture while walking or not, so I signed on for a class [commercial reference removed]...it helps that someone watches you and makes corrections. I mention this as I greatly appreciate the opening of my rib cage which helps my endurance, and has the added benefit of easing my shoulder hunching. I still need to think of this, but am beginning to see some improvement.
And at some point, I'd like to know who uses what info for weights/upper body strength. So much to read out there and not alot for someone 70 with some physical problems. That, and I'm impatient with the searches.

I agree with Marcie as well and would also like to point out that all these images and ideas are of Western cultures. I think you would find that representations of seniors on the other side of the world present them as wise, happy, and fulfilled.

Good piece. I've never cared that much about my looks, but I do care about how I feel.
So as long as I feel good, life is good.

I find myself rather curious about some of the changes I notice in the mirror... a new sagginess here, or a bit of hair where I don't want it to be... so far, it fascinates me to look at myself and others with quiet amazement at how our bodies change over time.

A couple of wonderful examples of aging women -- many photos of the elderly Georgia O'Keefe and Alice Neel's wonderful nude self-portrait in her 80s. It's not all sag and drag, there's dignity, acceptance and, more often than the media tell us, joy.

Marcie, Lyn and June have all expressed what I was going to say - I am happy (relatively speaking!) with my 75 year old body but I often look at representations of old age and think "Why so sad?" - part of the wisdom we have gained along with the wrinkles and sags is to be able to enjoy life - each and every day - I'd like that to be represented more often in images of age - thanks for the post Ronni

Very much enjoyed your article. Beautifully presented. Look forward to part 2. Thank you.

I feel at 68 that I am in an "in-between land". I have been trying to age gracefully. I keep fit and healthy without any aid from face lifts or tucks, but gravity is winning.

For many of the last years I have felt "old" young but now I am transitioning to "young" old and am having a bit of trouble accepting this. I am working on a new positive mindset but I feel awkward and hesitant yet in this

I will strive to be a strong, capable wise old person, but will always miss, just a little bit, the way a group of men opened up their conversational circle when I approached.