Imagine having loved one another for 46 years, raised a family together but being forbidden to marry. Until now. Finally. Thirty-five states need to think about this very hard.


HERE AND THERE REPUBLICANS SEE THE LIGHT

Texas Judge Carlo Key has announced he is running for re-election next year. No big deal until you know that he has denounced the Republican Party and is running as a Democrat for the first time.

”The party-switch comes...after Key attended a Dem event featuring the beloved Wendy Davis...” [she of the pink-sneakers filibuster].

"Justice demands fairness [and can only be served] "without prejudice towards race, color, creed, or whom you choose to love."

Take a look at the entire video:

You an read more detail about his decision to switch here and visit his campaign website here.

There's are good reasons I decided many years ago to not become a parent. This may be one of them (from the slightlywarped website):

Don't even try to pronounce that word; it's not meant to be pronounced, not really. It's a song title. From Italy. In 1992.

The song lyrics are what the English language sounds like to non-English speakers. And it's a pretty good tune, too. Take a listen:

There is a more complete explanation at the Now I Know website.


TO BE BURIED AT HOME

Jim and Patsy Davis met when he was 11 and she was seven. It took only one date as teens to know they were meant for each and they soon married.

Over the next 48 years, they raised five children and then, in 2009, Patsy died. Jim granted her dying wish “by laying her to rest just off his front porch.” Since then,

”From City Hall to the courts, the government of this little railroad town in southern Appalachia has tried to convince Mr. Davis that a person who lives in a town cannot just set up a cemetery anywhere he likes. On Oct. 11, the Alabama Supreme Court affirmed a judge’s decision saying as much.”

Davis has suggested to the court that he dig up his wife, cremate her and place the remains in the same gravesite on his front lawn. The city attorney admits there is no law against

”...tombstones or the placement of ashes, but he insisted that the coffin and the vault be removed. So if Mr. Davis fully complies with the city’s order, the yard will end up looking exactly as it does now, only with an urn rather than a coffin underneath.”

It's a love story with a Halloween-ish twist that gets more interesting with additional details. Go read more about the matter at The New York Times.

”My six-year-old daughter had been in her room wigging out for about an hour and there was no talking her down. I was getting fed up, so my husband decided to lighten the mood.

“For the record, she's not typically a beast child - she's actually a pretty awesome little kid who was having a rough day.”

The Virginia gubernatorial election is getting a lot of national press primarily because another antediluvian Republican wants to gain control of women's bodies.

That Republican, Ken Cuccinelli, opposes abortion in all cases except the life of the mother, he supports new restrictions on abortion clinics in the state and as state attorney general, tried to revive Virginia's anti-sodomy laws.

In support of McAuliffe, posters like this one turned up on the campus of Norfolk State University: 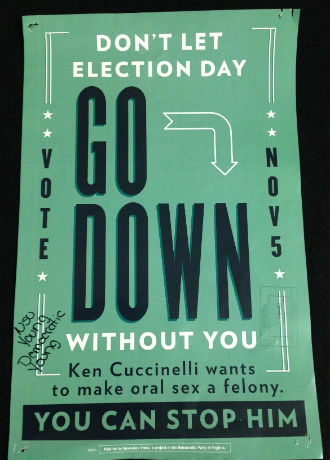 Another read: “Get your head in the game.” Pretty funny. But as a friend who sent me the image wrote in his email:

“For a while, the poster pictured was up on some walls, till the Democrats chickened out. Pity."

No kidding, a pity. The Dems are so consistently such wimps. More about the incident here.

Let's keep going with politics for one more item. It's so bad these days we may as well laugh when it's possible.

Since the government finally reopened, Republican House Speaker John Boehner is trouble with the tea party. Someone started a webpage of tea party insults against him. Things like this:

Even though these epithets are on the level of the kid in the film E.T. The Extraterrestrial who called his brother “penis breath,” they are real insults that appeared on Boehner's Facebook wall.

You can find more of them at the Tea Party Insult Generator website.

Darlene Costner has sent a video that is a wonderful antidote to all this political nastiness. Yes, it's a commercial. For Beneful. And it is a load of fun.

Love it all. I feel sorry for the old guy and the casket removal, but laws must be obeyed and I guess they can't let him set a precedent. It's too bad they can't make an exception in his case.

The dogs are terrific!!

One of the nicest things about my Episcopal parish is that our garden serves as a free burial place for the ashes of members. Since we had a large gay membership at the height of the AIDS epidemic in that community, there are many there, as well as many others -- usually one or two a year.

Actually, this sort of community arrangement for interment of ashes in a public/private space could be thought of as another money saving measure.

All I can say is, you help to make my day a little brighter by giving me something to smile about as well as something to think about.

Thanks for leaving us smiling.

It must be hard to make such a brave commitment to switch from running as a Republican to a Democrat in one of the reddest of red Sates. Bravo to Judge Carlo Key. I hope all who can will support his campaign.

I wish I could give that judge a big hug. He's a man of principles who, instead of blindly following a party that abandoned those principles, stood his ground. I understand, because the GOP abandoned me some years ago. Good luck in the coming election, Judge Key.

That dogfood commercial made my day. Watched it four times.

Mr Ducket and Dr. Jones deserve that glow. :) Good luck to the Texas Turncoat Judge, I've lived there and I'm afraid he's ass-deep in alligators with a squirt-gun full of sugar water. I'd be over the moon if he won, but I hope he has a back-up plan.
This was a great week for "Interesting Stuff" Ronni. Thanks!