FORCED TO MOVE HIS WIFE'S GRAVE

Remember back in October when I told you about Jim Davis's court battle to keep the grave of his wife, Patsy, in their front yard? Now he has lost that fight.

”With husband James Davis, his five children and some grandchildren standing by the log home, a crew unearthed the body of Patsy Davis from beside the front porch. Flowers still sat atop her tombstone.”

Patsy Davis's remains have now been cremated. I suppose the law is the law, but it was such a sweet love story and the man fought four long years to keep his promise to his wife to bury her where she wanted to be. You can read more here.

Until TGB reader Darlene Costner sent me a video montage of his work, I had never heard of Schwebel but surely wish I had. Here are a couple of his astonishing photographs: 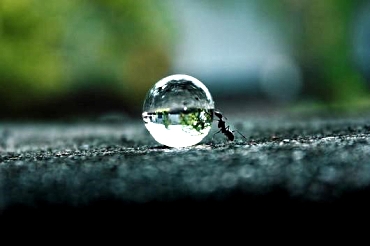 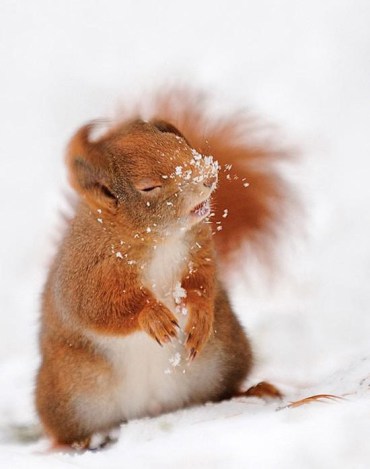 In Darlene's note accompanying the link to the video, she said she didn't like all the cross-fades in the montage and I agree. Still shots are meant to be contemplated, especially when they are this exquisite and I think the video presentation does a disservice to the remarkable work of Schwebel.

Even so, in case you disagree, here is the video:

If the video is as annoying or disappointing to you as it is to Darlene and me, there is a slide show here with most of the photos in the video. And you will find Schwebel's Flickrstream here.

This also is from Darlene. In our advertising-saturated culture, there are a gazillion boring, awful, irritating or just stupidly ordinary television commercials. Every now and then, something marvelously clever comes along and when that happens, we should stop and enjoy it.

It is just three weeks until the first anniversary of the unspeakable shootings at the school in Newtown, Connecticut. Since then, Slate magazine has been keeping a tally of gun death in the U.S. 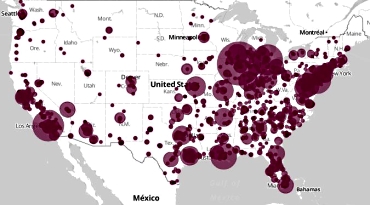 As of yesterday, that total has reached 10,771 and Slate reports that the number is probably low.

The map at its source is interactive and you can sort the deaths by age, gender, location, date and keywords.

Back when Bob Dylan's Like a Rolling Stone was released in 1965, music videos hardly existed so now 48 years later, Dylan's iconic song finally has one (in conjunction with the commercial release a Dylan album collection, of course).

Still, it is worth notice and what a video it is. Interactive. 16 channels. Here's a (non-interactive) preview:

Reviews of the full interactive video have been mixed. You can see it here and fool around with the various channels as it plays.


HOW SIMON'S CAT GOT STARTED

Simon's Cat has been an internet star for four or five years now. Here is a new video animation of how he came to be.


WHEN THE SELF-RIGHTEOUS ARE CAUGHT OUT

No commentary needed. Oh, except that it's okay to laugh at this poor jerk's stupidity. 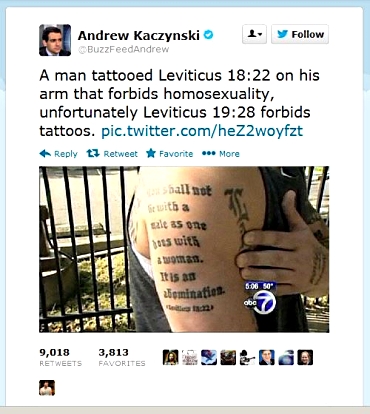 Leviticus 19:28: “You shall not make any cuttings in your flesh for the dead, nor tattoo any marks upon you: I am the LORD.”

Darlene's been busy lately sending a lot of good candidates for Interesting Stuff. Be sure to watch clear to end – past the initial credits.

In her email with a link to this video, Nikki Lindquist wrote:

“When you asked us a couple of years ago, something like - as you're aging, what are some of the things you miss being able to do? - my immediate response was that I miss the feeling of being light on my feet.

“It's sooo many years since I've had that feeling. THIS young man has it in spades. His feet barely touch the ground! Quite remarkable! He's a perfect example of what I miss!!

Take a look. The song is All Night from Parov Stelar.

Just back from hiking in Bhutan -- I sure know about no longer being light on my feet. Stumbled a few times; trudged more. I'm intent on "keeping on keeping on" til I inevitably drop.

Sometimes I feel like Bob. :-) Could be much worse.

Ah, dear Ronni, Schwebel's moved me deeply while his death horrified me. Loved Simon, delighted in Bob, and tapped my feet to those swift moves in the last video. Thanks Ronni.

What a bear! And what a dancer!

All that lightness and in wingtip shoes! Who knew anyone under 50 still wears wingtip shoes, to say nothing of dancing in them?

With all the high tech tricks we have, and the endless pool of creativity we command, every commercial should be as delightfully surprising and entertaining as this bear.

My feet went crazy over that dancer. Tore around the house like a cat gone wild.

"Did you stub your baby toe again?"

I laughed out loud at the bear video. And, wasn't Bob great and Simon the Cat and the dancer! Thanks so much!

In his book, A Gravestone Made of Wheat, Will Weaver addresses that same topic - the promise of burying his wife at home and the problems with the law - with a better ending. A lovely story.

The idiot with his tattoo is a perfect example of the ignorance of the right wing Christians. They also want to keep guv'mint out of their Medicare.

Loved the explanation of how Simon's Cat came to be. What patience it must take to work 3 months on one clip.

As for light feet, I would be grateful if I could still walk without staggering like an old drunk.

Fabulous collection of Interesting Stuff. Everything was amazing!

Tears for Dylan's "Like a Rolling Stone" -- it's one of my theme songs.

Smiles for Simon's Cat - I can't get enough of him.

Had to go to youtube myself after these bits. While there I played Lionel Richie's "All Night Long" and then Tina Turner's "What's Love Got to Do with It."

I hate exercise (still), but I love dancing, so I'm determined to take it up again. No matter that no one wants to see a 65-year-old dance, I'll confine my moves to my livingroom where only my cats and the wild raccoons and opossums can see me!

Re: The Gun Deaths Tally. Almost every day in the NY Times Joe Nocera publishes The Gun Report, a listing of all the shooting throughout the country. It's a frightening compendium of the horrible gun violence that sweeps though our country like a plague. And the worst is all the children shot and killed because of the easy availability of firearms in the home.

The dancer was wonderful....While my feet don't move that fast - I know that my spirit feels that way a lot!! Thank you for that video!!

Forget the feet - what I want are this young man's joints!