Home About Archive Contact
What's Your Secret to Long Life?
Conspiring to Pretend We Are Not Old

RONNI HERE: I met Jonathan Wang back in June when he contacted me about an ebook on fitness for elders and arranged a giveaway of the book for TGB readers.

Jon is a smart, young entrepreneur - managing partner of The ScaleUp Group with clients who specialize in building technology for elders. While working on the ebook, we found that we have interests and ideas in common, and we have kept in touch.

In August, I published his story about his grandfather and The Chinese Pizza. Now he has sent this one that is again about food and differing cultures but also about the tiny events everywhere in the world that can change the future in large ways.

Truthfully, my sister and I don't know a lot about how our parents came to be - well, our parents. Most of what we end up hearing are just lopsided, biased accounts from my mother, with my father on defense the entire time.

This is certainly one of the more entertaining stories and it was told to us while we ate dinner in Berkeley before we attended the football game.

Somewhere in Taiwan, where my mother and father had just met in their twenties, (my mother married my father in 1978), my dad thought it would be a great idea to take my mom to see some theatrical re-release of Gone With the Wind. According to the historical records, this was their second date.

Logistically my mother agreed to meet my father in front of the theater and then go in together 10-15 minutes before showtime. My dad ended up 10 minutes late, though, and when he arrived with his large smile he was also carrying a heavy knapsack. The contents would soon be revealed shortly after.

Halfway through the showing, my father got to work. He reached down and began rummaging through this knapsack that he brought with him, all while making a gigantic ruckus. According to my mother this goes on for at least three minutes and she was thankful he didn't bring a flashlight.

My father then pulls out a cantaloupe from the bag, fresh and uncut, the size of a small five- or six-pound bowling ball. He then brandishes a knife and not just any knife, but a large serrated knife used to flay meats and cut through bone.

I don't know how my dad would think this is okay. In public. In the dark. And with a young woman he barely knows.

He also didn't bring a cutting board but he did bring a plastic bag for rinds and seeds. He was about to position the melon between his thighs for a nice cut down the middle when my mother just looked at him and glared.

At this point, my Dad jumped in to defend himself and explained his romantic strategy.

Apparently, cantaloupes were very rare at that time in Taiwan and he really wanted to impress my mother by obtaining this fruit. He had also waited in a long line at the market before the showing to pick it up.

His plan was to cut the melon down the middle, spoon out the seeds and hand one half to my mother to enjoy while he ate the other half. I thought it was a most excellent gesture in theory, but just unfortunately very poorly executed.

My mother agreed and said that, to give my father credit, had he ignored my mom's now patented eye of disapproval and proceeded to cut the cantaloupe then and there in the theater, there would not have been a third date and therefore WE WOULDN'T BE A FAMILY.

How's that for a butterfly effect? 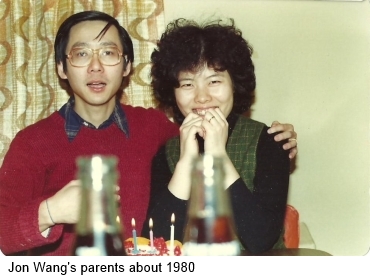 At The Elder Storytelling Place today, Marcy Belson: The Day My Parents Disappeared

Most unusual, and very entertaining. Good story. Thanks.

I think Jon's Dad is just charming in this story. I would have fallen for him right then and there.

Good intentions often go awry. Jon's father dodged a bullet. Jon's mother is a saint to have given him a second chance. His idea of a romantic offering would not have been one I would appreciate.

Delightful and what a fun guy!

Sort of like a cross between David Sedaris and Amy Tan, don't you think?

Could you please give a reference to the exercise book by Jonathan Wong? Thank you.

I remember telling you the difference Ronni! No problem Henry, common mistake. It got me thinking, there were some funny stories involving my last name I should write about.

You will definitely enjoy the fitness book as it is filled with wonderful videos to go with the stories.

One more example of the bizarre gestures that men think are romantic. Fabulous story.