We Grow Eyelashes – Why Not Hair?

Some of you were nice enough to say kind things about my appearance in this photograph taken during the conference I attended at the Business Innovation Factory in Providence, Rhode Island a couple of weeks ago. 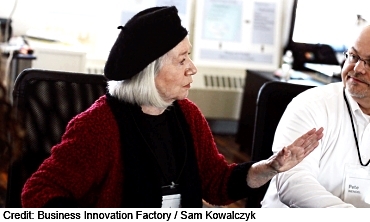 If you have been reading TGB for awhile, you know that I'm losing large amounts of hair at the crown and top of my head and after a lot of (futile) research into regrowing hair (nothing works), I've adopted hats as my solution for the foreseeable future.

Last week, at my annual vision checkup, I spotted an advertisement on a shelf for Latisse, the prescription drug that grows eyelashes. You may recall that four or five years ago, actor Brooke Shields was the spokesperson for the product in television commercials. Later, actor Claire Danes took her place:

I mentioned to my eye doctor that if we can regrow eyelashes, we ought to be able to regrow hair on our heads with the same method and it seems odd to me that no one is talking about using or adapting Latisse for that purpose.

He said there are researchers hard at work on that so I checked around the internet. At least one person whose hair is thinning has tried Latisse on his head:

“'I just put three or four drops on each side of my temple once a day,' said Mr. [Richard] Paduda, 32, an insurance worker from Boca Raton, Fla. 'The hair in that area, which was real thin and wispy — all those hairs got thick again, dark,” he told The New York Times in 2011.

That is what is called an "off label" use and although not approved by the Federal Drug Administration (FDA), nothing prevents physicians from prescribing Latisse for hair loss treatment.

Dr. Alan Bauman has been prescribing bimatoprost, the generic form of the active ingredient in Latisse, to his patients. He says it has regrown hair in 70 percent of his cases:

“'What we found is that where patients were applying Latisse, especially in areas where the hair was thinner and wispier and less pigmented, the hair grew thicker, stronger and healthier,' he said.

"Though some users of Latisse have experienced skin discoloration, Dr. Bauman said he had never seen any such reaction on the scalp of his patients."

Richard Paduda liked the results but stopped using Latisse after several months because it was too expensive – up to $150 a month and that's only in the small amounts needed for eyelash growth.

Dr. Bauman says his patients have had no side effects but the Mayo Clinic and other medical websites list these difficulties with Latisse:

• Itchy, red eyes
• Dry eyes
• Darkened eyelids
• Darkened brown pigmentation in the colored part of the eye (iris)
• Hair growth around the eyes if the medication regularly runs or drips off the eyelids

I suppose those are relatively minor problems, especially on a head, for anyone who hates his/her baldness and the last one would be a definite plus (but it makes me giggle to think about hair surrounding a person's eyes. Werewolf, anyone?

Dr. Bauman's stated results notwithstanding, according to The Times, neither Latisse nor bimatoprost, is the answer to baldness. The treatment

”...can strengthen and darken hair that grows from a dying follicle, but none can bring a dead one back to life. The result is an enhanced, refortified hairline rather than a brand new head of hair.”

Well, damn. Until I can get over my aversion to walking around with my bald head hanging out in public, I'm stuck with hats.

At The Elder Storytelling Place today, Roberta Teller: Age Never Mattered to Me Until Now

Appreciating your updates on hair loss/hair regeneration. Meanwhile, I and many TGB readers (c.f., comments in an earlier related post) LOVE the look of your hat above and hair below! Also, always appreciating your honesty, no-nonsense candor, and due diligence reported with wit and intelligence.

Hi Ronni -perhaps only a small consolation but truly the beret and the hair look terrific -and the face of course!!
Very elegant.

I totally agree that you look great in a beret. I adopted hats a while ago as I suffer from alopesia.

The good news is that I look
BETTER in hats than w/o!!

Oooh, hats can be so nice. I have quite an accumulation of red ones from my days in the Red Hat Society. I'm going shopping soon for other colors. Let's just say that what little hair I have is, well, very sad. Let's just label ourselves Chic, Elegant and, above all, Confident. Who knows what lies underneath our fashionable toppers, as long as we're smiling.

Yes. From the style blogging contingent, I'm going to raise my hand and say you look great in that photo. Great.

Lumigan (bimatoprost) was one of the drops I tried for my glaucoma. I remember thinking I'd be delighted if it also produced longer, darker lashes, but I checked every day for fear it would darken the skin around my eyes and make me look haggard, or darken my blue eyes to brown. Fortunately, it did none of those things. It also did nothing for the glaucoma. Oh well, at least it didn't grow hair around my eyes.

You look simply great. Dramatic. Easy to draw. Pre-surgery I got my hair cut short. Much to my surprise, I found I have very wavy hair. It makes me look as if I have hair again. LOL

I am so glad you posted that photo again because for some weird reason, it was not on my computer. How can that be?

Your hair appears to be shorter than it was in your last photo. I love the page boy effect.

I agree that the beret is very chic and you look glamorous in it. I could never get away with wearing one so I hope I keep my hair.

You look very good in a hat so it's a win-win.

You are anything but stuck with hats.

You positively ROCK that beret.

I love the page boy look and wear my own thinning hair in that style.

Have to go now. I'm on my way to the shops to look for berets.

Ronni-you look great in that hat!! I too am having hair thinning and my eyelashes are very sparse as well...ugh:-)

You ARE stunning in that beret. Oregon, because of the weather, seems to be hat-centric, so choices do abound, and you'll have lots of company.

I bet the other blog readers would enjoy (well, I know I would) seeing you do a periodic feature with a shot of you in a test hat.

When we reach this stage of life, we often have no one left who "sees" us in a way that we could ask, "Am I pulling this off or am I kidding myself?" like we used to be able to do in high school, college, or at work.

My thinning hair is most obvious after I get out of the shower and catches me off guard since I don't notice it that much when it's dry.

I would love to be able to wear a beret like that. You look terrific!!

Your hair looks great Ronni. It has body and it moves.

The beret gives you cachet, an artistic look.

You'd fit right in, in Montreal.

you look nice with the hat....I am experimenting with my hair letting it grow....for now....

Ronni, I think you look very nice in your hat. Look at it as being cool in the same vein as wearing shades indoors and/or all the time. My wife has general thinning hair and I tell her that I don't notice--well hardly--and that's all she needs. In your case, having my seal of approval should put any doubts aside.

I say keep the beret image; could have a meme working for ya! Sell berets! They really work! ;-)

And without the thinning hair problem, you'd never have known how great you look in a beret. Your signature look.

Wonderful picture. I bet you kept the conference honest too!

All I can say is that you look fabulous in that hat. I'm envious. By the way, here in Seattle, there is an old hat shop that sells wonderful, classic hats. I've never worn hats before, but just bought my first two there. If you ever get up this way, look them up - I think they're called Berni Utz and they're downtown. Always thankful for your presence, Ronni.

Don't know when you went short but that's a really great look!! :o)

I'm going to ask the acupuncturist I'm seeing Sunday if she thinks it can help with hair loss. She comes highly recommended. There are lots of claims it does on the web, but...there are a lot of claims on the web!

its funny, I have a friend working on re-growth and hair revitalization creams and ointments in Taiwan. Apparently they are more of a hormone supplement than a prostaglandin active ingredient. Not sure of side effects other than potential allergy to the protein, but certainly nothing close to bimatoprost.

you do look lovely in the picture. i had never thought about losing hair before. when i went into the bathroom, i held my hands over my hair to cover it, wondering how i would look without hair. i don't think i would wear a wig...hats and scarfs...there are so many beautiful ones and different ways of wrapping scarves. i think if most of my hair were gone, i'd shave the rest off.
i've seen bald women who look very attractive. i guess it depends on head shape and some getting used to it. some men look quite sexy totally bald. i think we could too if we had the right attitude!