In April 1964, late night host Jack Paar handed comedian Jonathan Winters a stick. It's just an old stick and all Paar says is, “Do something with it.” Watch as Winters riffs for four minutes of unrehearsed, brilliant funny stuff.

I don't think there are any contemporary comedians half as inventive as Jonathan Winters was. Give a big round of applause to Darlene Costner for forwarding the clip.

You would think that having more money by magnitudes than everyone else on earth would be the best revenge but hardly a day goes by now that a billionaire isn't whining that people are saying saying not-nice things about him (they are mostly male).

Now, the Economic Policy Institute (EPI) has issued a report showing the width of the income and wealth inequality gaps between the one percent and the 99 percent grew from 1979 to the most recent years for which numbers are available. Here's the United States average:

You can check your state on the interactive page here, and the full EPI report is here.

It turns out that dogs are puzzled by a magician's disappearance tricks in about the same way we humans are. It's good fun – take a look.

The magician is Jose Ahonen and the YouTube page wants us to know that the dogs were not deprived. They got treats both before and after the trick.


HE CAN SING ONLY IN THE SHOWER

That reminded my friend Jim Stone about a rather obscure 1999 movie titled Shower. I'll let Jim set up the scene:

”...the singer hung out at an old Chinese bath house with a bunch of older guys, and he always sang that song under the shower. But he was so shy that he couldn't get a note out in public.

“[In the clip], the kid working the hose is the mentally-challenged son of the old bath house owner, whose business is slated for demolition to make way for modernization...Keep Kleenex close."

Jim also mentioned that it is “a warm, touching, sentimental, wonderful movie.” I checked and it's available at Netflix via DVD but not for streaming. You can find out more about the film at Wikipedia.

TGB reader Bill Griffith send this video and a good thing that is because I'd never track it down – I pretty much ignore all sports. Really. All. But even I am impressed with this.


SARA DAVIDSON AND THE REBBE

Ten days ago or so, I told you about Sara Davidson's new book, The December Project, which is a report of the two-year conversation she conducted with widely revered Rabbi Zalman Schachter-Shalomi on the topic of “how not to freak out about dying.”

In doing that, I jumped the gun – the book would not be officially published until 25 March. It's published now and is available here and at all the usual booksellers online and off.


THE 30TH ANNIVERSARY OF FOOTLOOSE

Back in 1984, Footloose was a gigantic hit movie that helped make Kevin Bacon a star and is still thought of today as iconic.

A week or so ago, Bacon visited Jimmy Fallon on The Tonight Show and recreated some of that dance proving he still has the moves at age 56. Take a look:

Last Tuesday, the Supreme Court of the United States heard the case of Sebelius v. Hobby Lobby Stores, Inc. in which the issue of corporate personhood plays a central role.

Corporations with the rights of people. Uh-huh. Not something anyone not a billionaire can much get his or her head around.

To help us out, MSNBC host Joy Reid gave us a history of how corporations became people in a short, little video that is easy to understand.

(On a news network increasingly populated with hosts who are either hysterics or deeply uninformed, Reid is a standout adult on the roster – smart, reasoned and well-informed. Her show is broadcast at 1PM Eastern.)

You can read more about the Hobby Lobby case here.

This guy, Bryan Berg, has been all over the web, television, elsewhere for 20 years but I'd never heard of him before Darlene Costner send some photos of his card stacking work. 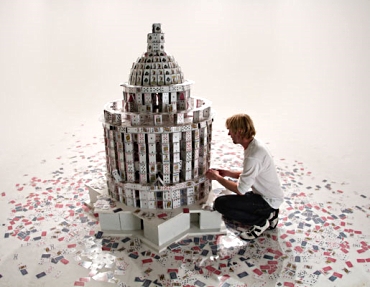 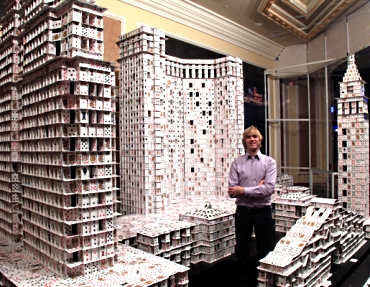 Berg holds Guinness World Records for largest and tallest houses of cards. Here is a profile of him from Guinness:

Part 2 of the video here and there is more information at Berg's website and Wikipedia.

The spectator commentary on this video is a little weird but don't let that keep you from cheering the rescue. It seems like a make-believe movie scene but is all the more riveting for being real.

Kevin Bacon was amazing on Jimmy Fallon! I wonder if any of that was 'faked' from old videos. Either way he's still in great shape all these years later. I love that guy.

That fire rescue video had an intense climax, didn't it? I thought all was done once the guy got onto the ladder. Be sure to watch it to the end.

Kevin Bacon is amazing. I think he could have taken a gold medal at the Olympics with his acrobatic ability.

And that rescue was heart stopping.

Hadn't thought of Winters in a long time. He was great, wasn't he? And oddly enough, back in those days, comedians didn't have to be foul-mouthed to be funny.

I saw Kevin Bacon on Fallon's show and loved every minute. He seemed not to have changed a bit from when he did the movie (based on a town in my old home state, Okla.). Can it really have been 30 years ago!?? Still love the music.

Amazing card houses. I've never seen these. And I used to think my three-story card houses were great.

I'm off in search of that bumper sticker, then I'll put on some dance music and see how long I last!

Hi Ronni, I ordered Shower on Amazon Prime to watch on line and you can also purchase it. I found a used O Sole Mio for $3.94 plus shipping $3.99. The new CD is about $25.00. Thanks for telling me about this as I think it'll be enjoyable.

Thanks for the singing tenor in the shower scene. I saw that movie way back when and LOVED this scene. I'd recommend it to anyone who can find it on Netflix or wherever.

Let me ask religious people: Do all people have souls?

So which corporations have souls? Hah.

How funny about 'The December Project.' I ordered it immediately from Powells after you wrote about it and received it a few days ago. It turned out to be a review copy that someone had turned in so I got it as a used book. I've started reading it and am so pleased with every page. Thank you for the recommendation.

I miss Jack Paar so, and all his wonderful guests...Jonathan, Peter Ustinov, Alexander King... great conversation on his shows.

Haven't watched nighttime talk since he left. Never liked Johnnie Carson. Just one "joke" after another.

You and Darlene have great eyes for good stuff. Thanks for another Saturday feast.