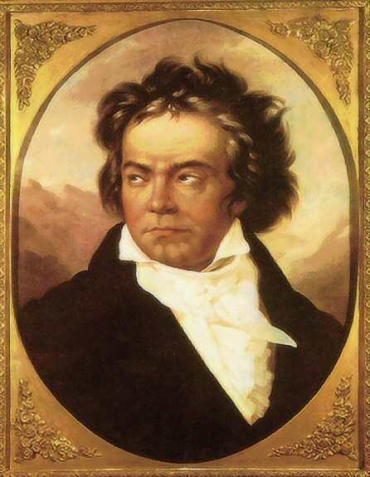 The Beethoven Obsession is a book about three men - well, four if you include Ludwig. It was written by BRENDAN WARD. 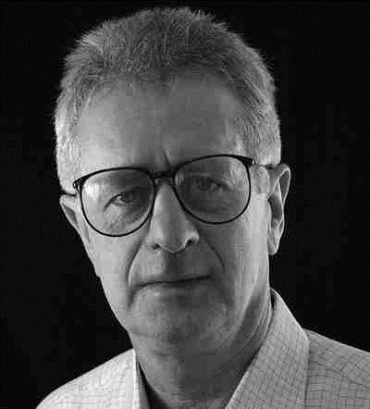 Brendan's mum was a trained pianist and played to concert standard. Most days began with her playing, usually Beethoven, and young Brendan grew up loving this music and became a decent pianist himself.

When he grew up he moved to Sydney from country New South Wales and naturally went to concerts there. It was at these he discovered pianist GERARD WILLEMS. 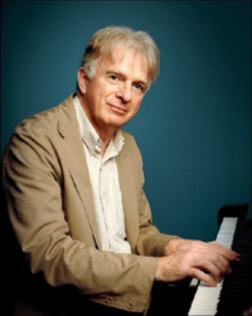 Gerard was born in The Netherlands and his family came to Australia when he was a boy. He learned the piano, both in the country of his birth, and with some difficulty it must be said, in his new country.

After some time he began a career playing the piano and teaching. He discovered a piano made by WAYNE STUART and was taken by the instrument. 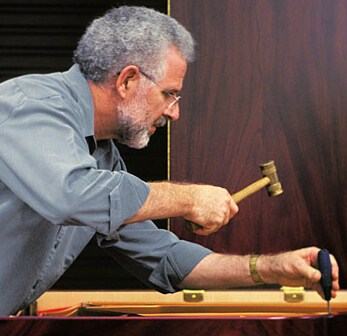 Wayne was a cabinet maker in Tasmania and he was fascinated by pianos. As a boy, youth and adult he'd like to take old pianos apart and put them back together again, both to repair them and to see how they worked.

It was through doing this that he discovered that standard pianos lacked something at the extremes – the very high and very low notes didn't ring as clearly as those in the middle.

Eventually he found a way of overcoming this and built his own pianos (that also had more keys such that it spanned a full eight octaves).

Brendan noticed that no Australian had ever recorded the complete piano sonatas of Beethoven. Indeed, few anywhere had done that. He thought that Gerard would be the man for the job and suggested it to him.

Gerard realized it was a big undertaking but agreed to do it; but it had to be using the Stuart piano.

Brendan approached the ABC (Australian Broadcasting Company) and they thought it was a good idea. However, they had doubts about the piano as some visiting pianists had tried it (notably Christopher Hogwood, who insisted on a Steinway) and didn't like it much.

They were unused to the clear sound all the way along the keyboard. The ABC suggested they used a different piano. Gerard said he would only do it if he could play the Stuart.

The ABC asked Brendan if he could think of someone else but he said he'd only be involved if Gerard was the one playing.

Eventually it was all sorted out the way it was originally intended to be and the box set was released to universal acclaim (including by me). That was some years ago.

Brendan wrote the book about the experience (and much more) and it was released recently. In the mean time, some previously little-known Beethoven piano works were discovered and Gerard recorded those as well as the piano concertos and the Dirabelli variations.

The original works were remastered and released in an even bigger boxed set along with the new works, again to overwhelming acclaim.

I'm going to play some music from the box as well as some other pieces of Beethoven for a bit of variety.

The three "new" sonatas (I'll be playing parts of two of them) Ludwig wrote when he was 11 and 12 years old. We're used to prodigies in classical music – Mendelssohn, Schubert and Mozart in particular – but we don't usually lump Beethoven in with them. Perhaps we should rethink that.

This is the first of the pieces. Just think what you were doing when you were 11 years old.

The first movement of the Piano Sonata in E-flat major, WoO 47, No 1.

The Duo for Two Flutes in G Major, WoO26 is the final work Ludwig composed while he was still in Bonn (where he was born and raised). He left for Vienna soon afterwards.

He wrote it for a friend of his to play and it wasn't intended for public performance, and wasn't published in his lifetime. It has two movements and we'll hear the first of these.

It has the great Jean-Pierre Rampal and the not quite so well known Alain Marion playing the flutes. 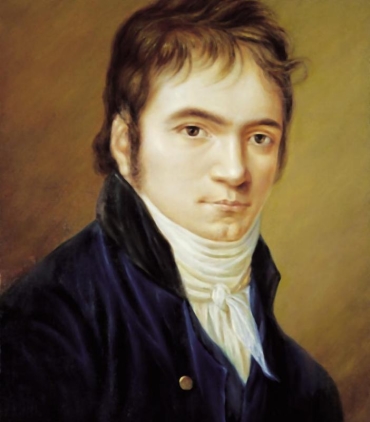 Ludwig composed five sonatas for cello and piano. He pretty much invented the genre as the cello had only recently come into its own as a solo instrument. It had been around in string quartets of course (thanks to Haydn) but no one had thought to bring it to the fore.

Although this one is called number two, it's actually the last of the five that he wrote. So, to the third movement of the Cello Sonata in D major Op.102 N°2. Heinrich Schiff plays the cello and Till Fellner the piano. 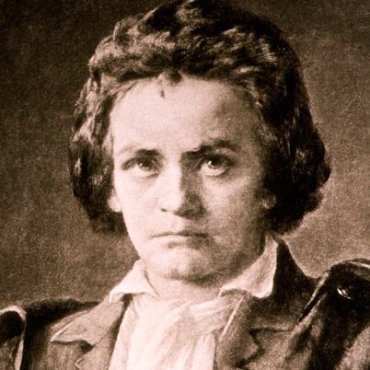 Back to the piano sonatas. The sonata No 4 was dedicated to the Countess Babette Keglevich, who was his pupil at the time. Ludwig apparently had the hots for Babette (this wasn't unusual for him), but as normally happened, nothing came of it.

Not quite nothing. We got this piece of music, generally considered the first of his great sonatas. The fourth movement of the Piano Sonata No 4 in E-flat major, Op. 7.

To mix things up a bit, here is some singing. We have something from an oratorio called Christus am Ölberge, or Christ on the Mount of Olives. It was the only oratorio that Ludwig composed and he was very dissatisfied with it, revising it several times both before and after it was first performed.

He remarked at the time that he'd much prefer to set secular works to music than religious ones. Here is a duet called So Ruhe Denn, sung by Maria Venuti and Keith Lewis. 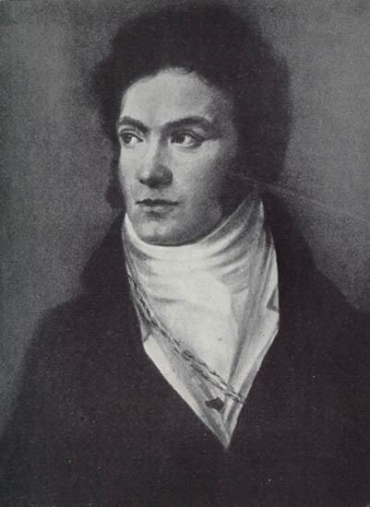 Another work that wasn't published in his lifetime, indeed, it wasn't finished – only two movements were written. It's a Duo for Viola and Cello in E flat major WoO 32. It has a subtitle by Ludwig "With two eyeglasses obbligato.”

It's pretty well established that he played this with his friend, the amateur cellist Nikolaus Zmeskall, who apparently lent his glasses to Ludwig at the time. Alas, we don't have those two to play for us, instead it's a couple of members of the Zurich String Quintet.

The CD doesn't specify which two are playing.  It's the second movement.

Yet another composition Ludwig wrote just before leaving Bonn. He wrote most of his works for wind instruments when he was quite young, possibly he was still overawed somewhat by Haydn and didn't yet have the confidence to tackle Papa Jo's domain of symphonies and string quartets. He certainly overcame that reticence.

The third of the very early sonatas – Ludwig was all of 12 when he wrote (and presumably played) this one. It's the first movement of the Piano Sonata in D major, WoO 47, No 3. Everything else I've included today is for small ensembles or a single instrument. However, Ludwig's most famous works (except for the piano sonatas) involve full orchestra so I've decided to include a token one of those, a part of one of his symphonies.

That's not as easy as it seems as the movements of most of them are really too long for a column such as this and the shorter movements from my favorite (number 6) actually flow into each other so there's no distinct cut off point.

I turned to Symphony No 8 in F, Op 93 and have included the third movement.

I'll finish with one of the most famous piano sonatas - and one of the most beautiful. The first movement of the Piano Sonata No 14 in C sharp minor, Op. 27, No. 2, usually known as the Moonlight.

Declaration: I was sent the book, The Beethoven Obsession by the author. However, I was going to buy it when I heard about it (or perhaps get it from the library). If you're interested in the book or the disks of Gerard playing the piano sonatas you can find out about them here. 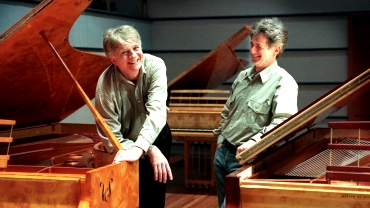 I usuaslly think of Beethoven as an irascible, deaf genius, hammering out the chorale from the ninth, snarling to himself because he knew he would never hear it.

It's pleasant to know what an an 11-year-old genius did with his time.

It's a joy to have you find pieces we'd likely never hear without your effort. Thank you Peter!

Thrilled with your choice today. Listening to Beethoven always brings tears to my eyes. The beauty of the music and to think in the end he could not hear the audience applause just touches my heart. I feel the richness in the tones of the lower register. What our young are missing today! Thank you.

The lighter side of Beethoven. Perfect for a cloudy Sunday afternoon.

I can identify with Beethoven. I can't hear his beautiful music very well. It makes me sad.

Great piece you wrote here today Peter. Appreciate your time and efforts to compile such commentary and its associated music.

I want to add my thanks, Peter, for this collection of classics-as well as the weekly musical interlude you put together of we readers of Crabby Old Ladies blog. As much as I enjoy reading Ronni's blog posts I look forward to whatever you have put together for us to enjoy.

I am very interested in hearing more about the 8 octave piano and looking forward to both the book and the boxed set. though it will have to wait a while so I can save my pennies, It's something to look forward to.
Elle in Beaverton Oregon