Home About Archive Contact
What You Can Do at the Medicare and SSA Websites
ELDER MUSIC: The Beethoven Obsession

The man you see in this video is an only child. So is his grown son. Watch his reaction when that son and his daughter-in-law tell him he is going to be a grandfather.

Metro Meteor is a retired race horse. A very successful race horse. Like many humans do in retirement, he has taken up oil painting. 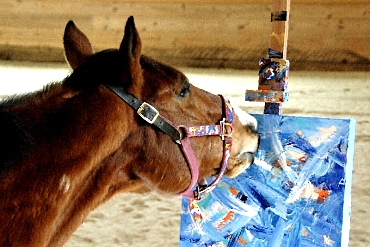 Metro Meteor got a big story in The New York Times this week and he's been featured on the Today show. Take a look.


ELDERS GIVE GOVERNOR SCOTT AN EARFUL

It is no secret that Florida Governor Rick Scott doesn't like Obamacare and he likes to tell anyone who will listen how it will hurt them.

Last week, he went to a senior center in Boca Raton to collect horror stories about the Affordable Care Act. It didn't quite work out the way he expected.

There is no video from the meeting so John Iadarola of The Young Turks online news service (TYT Network) read some of what the old people told the governor as quoted in the Sun Sentinel.

Tom Delmore was the first reader to tell me about this one.

I am such a sucker for this kind of thing. It is pure, deep silliness, piles of useless information. Wonderful stuff.

Everyone likes lists and this two-inch thick paperback has a load of the funniest, oddest, weirdest ones around – 164 of them. Okay, a few have only eight items but who's counting.

One I like is “Classic Toys and Games That are Older Than You Think.” Did you have any idea that the ancient Greeks played with yo-yos? I didn't. And that there was a version of paintball called wax dueling that involved pistols and wax bullets in the early 20th century?

Another list I like is the “Top 10 Criminals Caught Thanks to their Own Stupidity.” In one case, a pair of men in Colombia used the computers in an internet cafe for awhile then pulled out guns and robbed the place. They were nabbed because one of them forgot to sign out of his Facebook account.

This stuff is addictive and I'm going to spend way too many hours (days?) going through it all. The title is Listverse.com's Epic Book of (Mind-Boggling) Top10 Lists by Jamie Frater and it is available at all the usual book outlets.

If you've been reading this blog for more than a couple of days, you know how much I believe in the internet for old people. Now there is an upcoming documentary from some people who feel just like I do. Here is the trailer:

A screening of Cyber-Seniors is being held at the local theater in my town in late May or June, is being shown in a variety of places throughout the U.S. and more venues are being added.

You can find out if it will be available near you at the website.

Darcy Oakes is a magician who uses a lot of doves. He appeared not long ago on Britains Got Talent. That's all you need to know. Prepare to be amazed.

(I cannot remember how I found this video so if I owe anyone a hat tip, do let me know.)

Let's have some more magic – this time of a smaller scale but no less amazing.

For reasons we are not privy to, magician David Blaine was visiting at actor Harrison Ford's home. In the kitchen, Blaine pulled off some fruit magic and Ford reacted. Take a look.

The New York Times reported on a book titled Cat Sense from British biologist John Bradshaw which, says the Times, “provides the best answers that science can give for the time being” about what cats are thinking.

In the book, Bradshaw explains that unlike dogs, cats have not been bred for domestication so they have not changed as much as dogs from their wild ancestors.

And in fact, according to Bradshaw, 85 percent of all cat matings (presumably in England anyway – the NYT doesn't say) are arranged by the cats themselves between ferals and housecats.

”As for cats’ attitudes toward their owners, Dr. Bradshaw thinks they regard them not as kittens but as a combination of mother-substitutes and larger, nonhostile cats.”

You can read the entire review here.


DEEP SEA DIVING – IN A WHEELCHAIR

This video has been all over the interwebs this week and there is a good reason. The footage of performance artist, Sue Austin, is mesmering.

Here is her TEDtalk that includes her video of her underwater exploration in her wheelchair.

I absolutely love, love, love your weekly 'Interesting Stuff' columns. Where else are we going to find such a diverse mixture of great food for thought?

After pushing a wheelchair around for 12 years I'm mesmerized by the last video. I just wish my husband could have seen it. I also love the magic acts. How the heck do they do that? And as a widow who has just taken up painting again after a 30 year break, I hope one day I can be as good as that race horse. LOL

Thank you for not shying away from political stuff in your blog---the Obamacare video and other stuff. I need to take a page out of your playbook and do it more often in my blog. In fact, this week I wrote my very first post about a controversial topic and I've been blogging since the turning of the century.

For some odd reason, your page is cut off on the left side for me, so I can't see all the copy that goes with each video. Nevertheless, I enjoyed many of them. Loved the painter horse!

How ODD! As soon as I posted that comment, the page returned to normal.

Grandpa-to-be got me all teary. How lovely.

The grandpa-to-be brought me to tears, too, and I'm not a usually given to tears that quickly.

I am so pleased that seniors and cybers are coming together.....now if we could only have seniors in heaven on somebook. GREAT STUFF!!!!

Really loved the Grampa to Be clip. It was really heartwarming. I am not usually that moved by these kinds of things but this one got to me. Thank-you...

I think that anyone who is told for the first time that they are going to have a grandchild can fully identify with that sweet grandfather-to-be. I had to wait until I was 67 when I was told that wonderful news and I had given up on ever having a grandchild.

The magician is truly a Wizard. His tricks are impossible, yet the camera does not lie. (Unless photo shopped.)

As always, diverse and fascinating topics. The Young Turks seemed bright and aware until they got to the IRA topic. They most definitely need to invest now for retirement outside Social Security, but it's not the IRA's fault they lost money. My opinion is that they may be taking a too short-sided view. Perhaps they need to read some Warren Buffet articles...people are making money on their investments when they don't overpay for fees, pick indexed funds wisely and don't take a short-sighted measure yada, yada, yada. Seniors may not have the luxury of a long view, but these young people need to capitalize on the time they have. They have enough challenges in their future. Not saving is not ok. Hope they got lots of feedback on that airing.

That grandfather-to-be video broke me up. What a great way to announce the news. That baby will be able to see how it meant to grandpa.

Kenju: sometimes I lose the left side of Ronni's blog, clicking the reload restores it for me. It happens on IE for me, and since I started viewing blogs on Chrome the problem went away. I am clueless as to why.

When I learned that I was to be a great-grandmother, I reacted exactly the way that lovely grandfather did. So I felt his joy completely.

I am totally addicted to your blog, Ronni. Many, many thanks !

Wow. Everyone a winner. Even got to see Han Solo's kitchen.

The Young Turks video subtitles must have been translated by Siri. They were unintentionally hilarious, but if deaf viewers rely on them, they're going to get a very skewed view of what the segment was trying to present.

The dove magician was amazing, though.