IMPORTANT EDITORIAL NOTE: I do my best to properly credit the people who send Interesting Stuff items published here and I know I have said I will link to your blog when you have one. But you've got to tell me the name and the URL.

For some of you I know the name of the blog and for some I even know the URL. But for most, I'm guessing or having to search my blog to find previous links or search the internet to find the URL and it's taking too much time.

So from now on if you want a link to your blog when I use an item you've submitted, you must include the name of the blog and the URL.

And undoubtedly you need to be at least 40 years old to get it. (Hat to tip to many of you)


ALMOST AS SHORT AND EXTREMELY CUTE

One short laugh deserves another. From TGB reader Lauren Nelson.

Most of us old folks get frustrated with our memory lapses. Now, someone out in a desert somewhere has gone to extremes to help us out. I hope it's a friendly joke. Even if it's not, it made me laugh. (Hat tip to John Brandt) 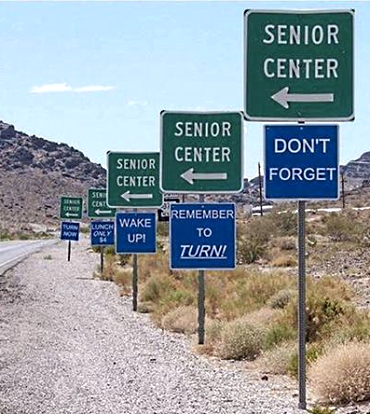 As with the first item today, you probably need to be at least 40, maybe 50, to know who these two guys were. In their prime they were wonderful and this dance from the film, The Seven Little Foys, proves it. (Hat tip to Marian Methner)

MS Contin and OxyContin and Fentanyl are among the prescription drugs being sold by elders to help make ends meet.

”Hervey Bay GP Dr Ken Treichel says he's banned six elderly patients from his surgery in the past year for selling their medication. 'It's absolutely rampant,' he told the newspaper.

"'I actually see people (selling). I've seen people walk up to them, bring the money out and do the deal, standing in the car park.'

“Drug and Serious Crime Group Sergeant Adam Frost said people of all ages had been busted buying and selling prescription drugs, including the elderly.”

That's according to the Courier Mail newspaper in Brisbane, Australia but if you don't think it's happening in the U.S. and other western countries too, you're dreaming. (Hat tip to Domini Stuart)

26,731 days have passed since I was born which means the total number of candles on all my birthdays added together equal 2,701 so far.

That's according to a website called You're Getting Old where you can plug in your own birthdate and see how much time has gone by.

The information will either make you feel bad about being old or will delight you to know. I chose the latter option. (Hat tip to Cile)

Thor knows 3:30AM is too early to get out of bed. According to the YouTube page, in Thor's defense, he had been roused at the bleary-eyed hour of 3:30AM because his humans expected him to join them at the bagel factory where they work.

Someone named Alfred Thumser posted this to Twitter. Heh. I have the same thought every time I need to search for my birth year in a dropdown menu.

Thanks to TGB reader, JB Lockhart, we now have this song from Donna Lou Stevens who explains how it came about:

”This whole creative whirlwind started in a living room on the Mendocino coast, just goofing off with my girlfriends at a weekend party. We were all musicians sitting around trading songs. I started singing my 'Older Ladies' song, and everyone started chiming in.”

So they made this video of it. Whoo-eeee. Yes, we are divine.

If you're interested, Donna Lou is trying to raise money for her next music video via Kickstarter.

I'm glad to not be alone in feeling old when scrolling down for my birth year--there's always a little pang.

I just noticed your newer photo at the top of your site. Don't know when it was changed, but it's a good one.

Donna Lou Stevens and her fellow musicians look like they are having a whale of a good time making that video. I loved the take-off from the "Sound Of Music".

You just can't beat Bob Hope and Jimmy Cagney for sure fire entertainment. Bob was so funny and we sometimes forget what a great 'hoofer' he was. I loved that clip and wonder why we don't see more of that kind of entertainment in movies now.

Ah, you offer just what I need this morning. I'm sitting here grinning and a tappin' my toes. Loved it all.

Great post Ronni! Donna Lou Stevens is wonderful. She and her friends look like a lot of fun as well.

Love your Saturday posts! Though I don't remember Bob Hope & James Cagney when they were that age, I grew up watching them in "old" movies from the '30's and '40's on television, and seeing them reminds of a time when life was simpler.

I have to laugh, ruefully, whenever I scroll down for my birth year. When I have to do it on a video game site, I always worry the list won't go far enough!

I don't believe gravity affected Jimmy Cagney the same way it affects the rest of us. He hardly touches the floor! And I *love* the "Older Ladies" video. My husband is in the kitchen singing it now. :D

scrolling down to find my birth year? not a problem. heck's bells, I'm just glad it's still there!
:)

Hat Tip to you Ronni, this wa a great blog day. I thoroughly enjoyed it from beginning to end. Thank you for being there.

I am a newbie to this blog. I am a 60 yr young man who recently viewed Ms. Donnalou Stevens Older Women Anthem music video. It is so amusing, realistc, fun, and crazy in a Great way ! I am looking forward to Dinnalou's Older Men Anthem music video as well ! We Baby Boomers luckily lose out to all the modern age music, so Ms. Donnalou Steven's talent in writing and singing are Very Much Appreciated & Welcomed by our large Baby Boomer population !! :) Thank you Donnalou is the Best Simpliest way I can say it !!! Best regards, a new fan, Alan from Las Vegas