Home About Archive Contact
ELDER MUSIC: The Songs of Gerry Goffin and Carole King
Snapshot of 65 and Older Age Group in the U.S.

If you read my Senior Planet story about my choice for best in show for elders at CE Week in New York, you also got a small taste of a runner up business I liked, Laundry Puppy.

But there is much more to tell.

First, you have to love the name. Second, it is a radically simple service that you don't need me or anyone to explain. This box that is posted at the top of the Laundry Puppy home page says pretty much all you need to know: 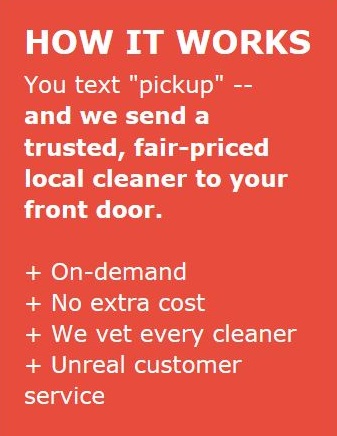 If that's not entirely clear, let me repeat: you pay only what you would pay the laundry or cleaner if you did the dropoff and pickup yourself. No extra charge for Laundry Puppy. And here is an example of the text messaging:

Maybe it's not a necessary service for small towns and suburbia (don't, however, count that out), but in big cities, millions of people need clean clothes and have no time to deal with it themselves.

(Personal Example: When I was still working and living in Greenwich Village, for three years I needed to leave for work before the local laundry opened and I was rarely home before it closed. That meant I had to use some of my precious weekend time dealing with dirty clothes. Laundry Puppy, where were you when I needed you?)

And it goes without saying that the service is also good for elders who may find it hard to get out and about as easily as they once did or to haul a heavy laundry bag to the local laundromat.

Over several chats with the 25-year-old co-founder and CEO, Aaron Cohn, I learned that Laundry Puppy launched last fall and is already available in many sections of Manhattan, Brooklyn and Queens. It is currently being beta-tested throughout the Bronx, northern New Jersey, Miami, Boston, Philadelphia and Washington, D.C. with more locations to come.

All that would make Laundry Puppy a good story but there is more that makes it even better, especially for a blog about growing old.

As Aaron explained to me, the original idea was that when Laundry Puppy contracted with individual cleaning and laundry establishments, they would provide an internet connected tablet for the owners to communicate orders and information with Laundry Puppy.

What Aaron had not anticipated, however, is that most of those laundry and cleaning store owners were old enough to be not only his parents, but his grandparents as well and although some tried to work with the tablet, overall the learning curve was more than they wanted to bother with.

Now you would think, hearing such a story, that Aaron's business idea had hit a gigantic snag, even a wall. We live these days in a fast-moving world of internet, texting and apps and supposedly no new business is worth its tera- or petabytes without a glittering assortment of electronic bells and whistles.

Aaron realized that there is a foolproof, legacy technology that needed no Kickstarter or Indiegogo funding, no development, no beta testing. Not even a penny of investment.

Are you ready for it? The telephone.

So customers, as in the original business plan, text their pickup request to Laundry Puppy. Laundry Puppy then switches to old technology to telephone the laundry or cleaning service closest to the location of the pickup request.

No extra steps for the customer who only texts with Laundry Puppy, and the owners of the cleaning establishments get to expand their businesses while using the technology they have known and loved all their lives.

It is a beautiful blend of old and new, young and old.

But wait. There's more. A surprise kicker. Aaron mentioned in a phone chat that only recently his mother told him that the laundry business is apparently in Aaron's genes. This is a photo of the S. Schiffman Cleaners and its trucks that did dry cleaning pick up and delivery on Long Island many years ago: 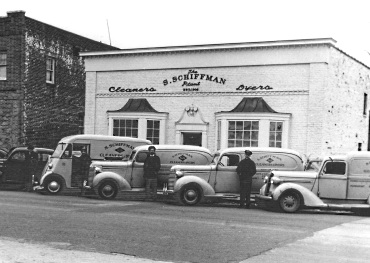 And here is a photo of Aaron's great grandfather and great uncle who ran the Schiffman dry cleaning business. 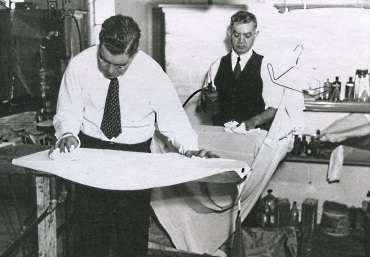 Aaron's enthusiasm for Laundry Puppy is what attracted me to his booth at CE Week. He's irresistible when he's explaining it. And as we have seen, he is also a creative businessman who adapts quickly to new information.

Even though Aaron's business didn't quite make the cut for my best in show, I thought you would enjoy his story and it's a good way, too, for me to wish Aaron a huge success. But I suspect he doesn't need it. He's going to be fine.

There is, however, one thing that puzzles me - a small mystery.

Laundry Puppy has been in operation for about seven or eight months. Certainly there were months, maybe even a year or more of development time before launch.

During that period, Aaron must have explained to his mother what he was working on. Wouldn't you think? And so how is it that she didn't get around to telling him about his grandfather's and great uncle's laundry business until now?

I have been reading about this on Twitter. I can't remember though how the company makes money. Referral fees?

I love the idea.

Linda...
Laundry Puppy takes a small fee from the price of the cleaning and laundry.

I love the name, Laundry Puppy and can see how the concept would be a great success in a large cities. How strange (and sad) that Aaron didn't know about his grandfather's business before starting his own.

This business model works for local restaurants who normally don't make deliveries. There is no reason it should work with laundry. The nearest dry cleaners to our ALF is much too far for any of us to travel to. This would be a godsend.

What a great innovation. I absolutely love the blending of technology lines along texting and phoning to make the service cohesive and accessible for all those involved! It's so good to see that tech services like this are taking seniors into account and adjusting their product accordingly.

Great idea. I don't need laundry puppy, but I would like a grocery puppy. Now I wonder if Aaron might consider branching out to other types of services? How about a pharmacy puppy?

I should add that I realize those types of services I mentioned might require a shopper at the other end, but I think a grocery store or pharmacy could take list from the subscriber and fill it for the puppy to deliver.

There is grocery delivery available in our area from major local supermarket. Great service. They charge fee.

In my childhood in a very small WV town one could call the grocery for delivery. The dry cleaner did the same and the pharmacy would call the local taxi service to deliver their orders. All, of course done by phone. What goes around comes around?

Much like Sidney, we had a breadman, a milkman, and a dry cleaner who regularly delivered, and the grocer delivered on order. In summer, the milkman would even put the milk in the fridge. My parents both worked, but the door was always open. Different times.

This is a creative idea that could be expanded to other services.

In this area, the dry cleaning store hires independent contractors who buy routes. They pick up and deliver laundry on a regular schedule. A good friend had one of the routes, but when the economy went downhill, the business went down so much that they could not continue. The first "luxury" that many folks cut from their budget was the dry cleaning.

Safeway delivers in many local areas, with no charge if you spend enough.

Amazon Prime delivers for free, too. My working mom friend has all her staples delivered monthly; once she set it up she never thought of it again.

Your notion of a local community banding together to keep elders in place feeds right into this, Ronni, doesn't it?
a/b