Home About Archive Contact
The Power of Music for Dementia
ELDER MUSIC: 1956 Again

The judges on AGT were pretty sure they weren't going to like Mr. Jessel. See what happened.

In last week's Interesting Stuff, 98-year-old Mary Phillips explained how she was fighting an eviction notice from the apartment she has lived in for 50 years. TGB reader Chrissoup sent in a followup report which includes a statement from the company that wants to evict Phillips.

”Today Urban Green CEO David McCloskey released a statement saying that Phillips would be allowed to remain in her Mission neighborhood apartment for the rest of her life cost-free.”

According to the rest of the story, that's not quite it. There is no provision for Mary Phillips' friend and caregiver to remain in her apartment which would, it seems, make the offer useless.

And it's even more complicated than that. You can read the report at SF Gate.


THE BEST LEMONADE FROM LEMONS STORY EVER

Joe Pleban, age 23, loved sports, extreme sports. He contracted a rare joint disease in his ankle that required amputation. You would think that would be a terrible blow to Joe. Think again.

The fullness of the human spirit can sometimes be astonishing. You can read more about Joe Pleban here.

A bunch of folks at Harvard surveyed more than 350,000 people to identify some regional linquistic differences and then The New York Times turned it into an interactive quiz for its readers. 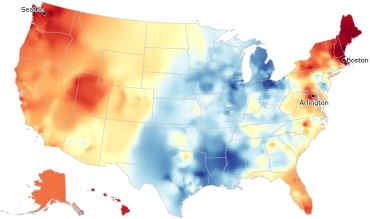 Red areas are where my linquistic origins are most similar; blue is least similar. I don't think it is anywhere near correct but then, I've lived for short and long periods of time in ten U.S. cities scattered all over the map so I probably don't have an easily identifiable dialect.

You can try the quiz for yourself here.

What becomes more evident with each passing week of John Oliver's HBO program is that he, a comedian, is doing the best educational reporting on serious issues of any media outlet around – any, including print, online and television.

Here is his latest from last Sunday's episode of Last Week Tonight. It's lengthy and worth every moment.


LET'S HERE IT FOR WOMEN BISHOPS

At least one religious group is catching up to the 20th century. Last week the General Synod of the Church of England approved consecration of women bishops. Read about it here.

I'm never quite sure if these videos of Elders React to [insert almost anything] are funny or ageist. Mostly I laugh because, depending on the topic, I could be one of the elders in the videos.

I've been a Sherlock Holmes fan since I was a kid. I've read the entire oeuvre- oh, probably half a dozen times over my life although I'm not so far gone to have considered membership in the Baker Street Irregulars.

Now, production is underway in London of a new movie about Holmes, this time as a 93-year-old retiree living by the sea who is struggling with a failing memory. He is played by Sir Ian McKellan. This is the first public photo of McKellan in character: 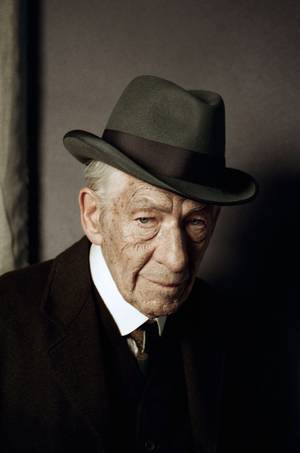 The film, titled Holmes, is adapted from a 2006 novel by Mitch Cullen titled A Slight Trick of the Mind. I hope the film improves on the book which I found too tedious to finish.

You can read more about McKellen's new role here.


HIDDEN MIRACLES OF THE NATURAL AND SCIENTIFIC WORLDS

Filmmaker Louie Schwartzberg gave a Tedtalk recently about a film that makes use of high-speed cameras, time lapses and microscopes to show us the world around us that cannot be seen with the naked eye.

Thank Darlene Costner for sending this video which is a collection of excerpts from a new 3D movie titled, Mysteries of the Unseen World. It's great fun to watch.

I'm acquainted with Steve Collier who is Mary Phillips' lawyer in the San Francisco eviction proceeding. He's not a BSer. If he says Urban Green's offer to the tenant is a sham, I believe him. Follow Ronni's SF Gate link if you want a fuller story about this.

It seems that my dialect most closely matches New York. Ronni will be surprised.

I must be a Western girl through and through. My dialect map shows almost an entire red Western U. S.

Now I know what Google glass is all about. Wow! It's truly amazing, but like the man in the yellow shirt alluded to, I do wonder about how we will live with no privacy whatsoever.

Simply wonderful stuff this week. And too, I who was raised in Southern California have a dialect like my mother's from Wisconsin. :)

My dialect is strictly west. LOVED Ray. The Google glasses was good too.
Thank you for the up date on the lady in San Fransico

And the TED video was amazing. These glimpses into the otherwise hidden views and behaviors of nature are mind-boggling. Thank you for all this interesting stuff.