Several readers send this video of the final concert from the remaining members of British Monty Python comedy group.

This video is the final song on the final night of the final 10-night stand in London during which many of the other performers from earlier in the evening joined them on stage.

From Darlene. You don't often see Queen Elizabeth II or her son Prince Charles having this kind of fun. Too bad we don't know what they were laughing at. 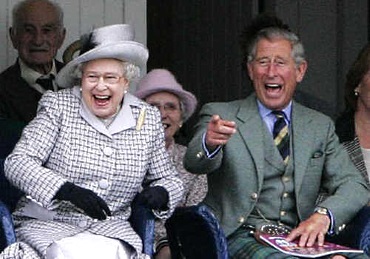 The actor George Takei, famously known as Mr. Sulu from the original Star Trek series, was on The Daily Show to talk about a new documentary about his life and host Jon Stewart zeroed in on Takei's childhood in one of the most shameful events in American history.

Takei was five years old, he tells Stewart, when he, after Pearl Harbor, his parents and siblings were forced from their home to the camp for Japanese American citizens at Santa Anita Racetrack where a friend of mine also grew up. Take a look:

There is an extended interview online at The Daily Show website.


SAD AND FUNNY AT THE SAME TIME

Once upon a time, in 2004, a pine tree was planted in Los Angeles in memory of Beatle George Harrison: 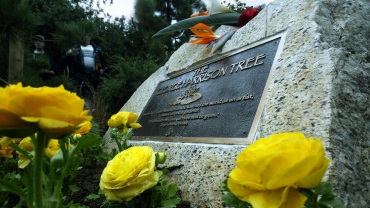 Now, the tree will be torn out and replaced because it was killed by an infestation of – wait for it – beetles. Heh.

I've been meaning to show you this video since last May when actor Kevin Spacey appeared on The Tonight Show with Jimmy Fallon.

You may or may not know that Spacey is a decent singer. Although he is better known nowadays for playing Frank Underwood in the Netflix hit, House of Cards, in 2004, he directed and starred in Beyond the Sea, the biography movie of Bobby Darin, and sang all the songs himself. I have the album and still play it now and then. I like Spacey's voice.

On The Tonight Show, Spacey and Fallon joined the members of the barbershop quartet called Ragtime Gals to sing Talk Dirty.

There is more information with links to additional song videos here.


NO SELF DRIVING CARS FOR DECADES (?)

Some of us elders have been carefully watching the development of self-driving cars because they could be so useful to elders who, when they can no longer drive for various reasons, could be less dependent on the sometimes non-existent public transportation and the kindnesses of strangers.

Although it is only one step in the right direction, I was thrilled a few years ago, to try a self-parking car at Ford Motor headquarters in Dearborn, Michigan:

I was amazed at how well it worked. Now, however, if we can believe the MIT Technology Review (and I generally do), it will be decades before self-driving (also called autonomous) cars will be ready for urban use:

”For example, a fully autonomous car would need to understand that someone waving his arms by the side of the road is actually a policeman trying to stop traffic.

“When surveyed by the conference organizers, the 500 experts in attendance were not optimistic such problems would be solved soon. Asked when they would trust a fully robotic car to take their children to school, more than half said 2030 at the very earliest. A fifth said not until 2040, and roughly one in 10 said 'never.'”

I hope they're wrong. You can read the whole story here.

As I keep repeating myself – John Oliver may be the best news person on television even if he is a comedian. He has been specializing in in-depth coverage of important issues. Last Sunday on Last Week Tonight, he took on America's prison system.

Just like the polite cat in this video, my cat Ollie taps me lightly on the arm or leg or face or whatever body part he's near when he wants a pet or a head scratch. Take a look:

For Ollie, however (and who knows – maybe this cat too), when food rather than affection is the question, he's more insistent. Well, “vicious” would be the better word and I've got the scarred ankles to prove it.

Instead of self-driving cars, we should be looking for ways to improve public transportation. The "ParaTransit" system here in Westchester county is so bad that many seniors don't use it. Some folks have waited on the phone for an hour just to make a reservation.

a year or so ago, I was driving on a freeway fairly near the Google hq when I was passed by a Prius with a twirly hat on its head. Yes, a driverless car and moving right along. It was following other cars perhaps a bit more closely than I would, but it was certainly behaving in freeway traffic.

Nevertheless, I sort of don't go down that way so much anymore.
:)

Perhaps the Queen and her son, Charles, are laughing in response to Prince Philip sitting down on the whoopee cushion they had placed on his throne. You think?

I love the polite cat. He certainly knows how to make his wants known. When the tap didn't get the result of a head scratch he used his head to get his point across.

The shameful time in our history related by George Takei brought back a memory for me. Manitou Springs is a tourist town adjacent to Colorado Springs. A Japanese family had owned a curio shop there and my Aunt worked for them. The family's name was Knockei and they had many children. They were sweet and gentle people who had lived there many years. One morning my Aunt went to work only to find the store boarded up and the Knockeyes gone. It was a long time before the mystery of their disappearance was known. Such a cruel and disgraceful period in our history. The only difference between our internment of the Japanese and the German internment of the Jews, Gypsies, gays, etc. was that we did not kill or starve them. And the children did have school, but it was still internment.

I attended the live broadcast of "The Last of the Pythons" in Ft. Collins, CO. Big fun but quite bittersweet, teared up at the final sing-along. As usual, can't believe it's over. . .

That's the problem.........you don't think about endings & I guess that's a good thing. I just try to think positively, but for the life of me I can't find much today that would cause me to feel a loss such as with the Pythons........Dee

It's more likely those jolly royals are celebrating the passing of another year in which they did nothing constructive and once again ripped off their "subjects" for a few million pounds.

I will never understand why we Americans pay any attention at all to these useless fops, much less fawn over them.

Coincidentally, I published pictures of what pine beetles do to a forest today. Had missed the news about the George Harrison tree.

Polite kitty is an Exotic short hair. Persian with short hair.
Post a picture of Ollie the Savana.

Not spelling it right.

George the mystic gets the last laugh.