The older we get, the more important preserving those two physical attributes becomes. Darlene Costner found us some inspiration. Unfortunately, it is beyond you and me and most everyone - but it's amazing to watch.


BUZZFEED LISTICLE THAT MADE ME NOT HATE A LISTICLE

The headline to this listicle is “Jokes So Clever You Probably Won't Get Them” and yes, for me that's particularly true of the math and science ones. But there were several that knocked my socks off. Here are two:

”Mahatma Gandhi, as you know, walked barefoot most of the time which produced an impressive set of calluses on his feet. He also ate very little which made him rather frail and, with his odd diet, he suffered from bad breath. This made him a super calloused fragile mystic hexed by halitosis.”

I love that. Here's another:

“A voice from the back of the room piped up, 'Yeah, right.'”

You can read all 21 clever jokes here along with a whole lot of discussion with even more clever jokes going back several years at Reddit.

My friend Lew Grossberger with whom I had dinner in New York last week sent along this Buzzfeed listicle titled, “27 Impossibly Pretty Reasons to Go Gray This Summer.”

The only problem with the photos is that all of them look like this: 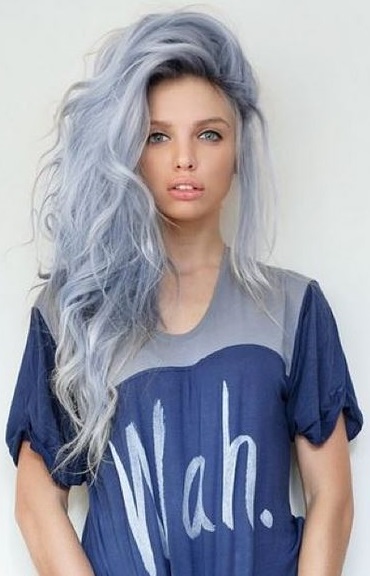 Not a single photo of anyone older than 35 or 40. Here's what Lew said in his email:

“What, they couldn't find any old people with gray hair? Also, if gray hair becomes trendy, does this mean oldsters will get more respect?”

I started going gray in my mid-30s and believed – we all did then – that I had to cover it. It was years before I let the gray grow out.

Wouldn't it be a good thing if these young women never feel that pressure and don't cover their gray unless it's a wild color just for fun? You can see all the young grayheads here.

Oprah protege, Dr. Mehmet Oz, has long been a nemesis of elders as an advocate of anti-aging potions. He also pushes highly questionable dietary aids and a couple of weeks ago he was called before Congress to testify about that advocacy.

I wanted to report on it then, but I needed the time to prepare for my trip to New York. Thank god we have John Oliver to do the job for me – and so much better than I can.

This is a bit lengthy, 16 minutes, but worth your time not only for the comedy – but for some of the finest reporting you can see anywhere on television. Anywhere. On. Television.

Darlene has done it again sending in this fascinating video about how to make a carrot clarinet.

You can learn more about Lindsay Pollack at the YouTube page.

Let's do a little crowdsourcing today. I know there are quite a few TimeGoesBy readers who enjoy genealogy and probably use ancestry.com. A few days ago, I received an email from that service with this announcement:

”This 4th of July holiday, discover how deep your American roots go by searching all of our U.S. Census Collections (1790–1940) FREE. Discover where your relatives worked, who they married, the names of their family members, and a whole lot more.”

Here is my problem with that come-on: Announcing that the service is free for one day pretty strongly implies that on any of the other 364 days, it will cost you. But what I don't get is how a for-profit service can charge for information collected by the federal government that we have all paid for with our taxes.

Does anyone have an explanation? Just curious.


NUMBER 1 BEST THING YOU CAN DO FOR YOUR HEALTH

I'm acutely aware that I spend a lot of time here since I've lost so much weight and become an exercise convert reminding you of the astonishing health benefits of moving around a lot.

Not that I want to become a bore about it, this video animation has been sitting around on my computer for nearly a year and it is one of best exercise motivators I've seen. Take a look. From Dr. Mike Evans.


THE CAT AND THE DUCKLINGS

Another amazing cross-species event. I never tire of them. Thank you again, Darlene Costner.

If you are a fan of Jon Stewart's The Daily Show, you undoubtedly know of the Egyptian satirist, Bassem Youssef, who patterned his program in Egypt on Stewart's.

Youssef has appeared in the U.S. on Stewart's show and when he was directing a movie in the middle east last summer, Stewart appeared on Youssef's show.

A month ago, following the lopsided elections in Egypt, Youssef's show was canceled. He spoke about that last week at the Deutsche Welle Global Media Forum:

”Fear sells. Fear works. Fear makes you get away with anything,” said Youssef. “And when people are afraid, they will not accept logic, let alone satire. Fear can drive the masses. Fear can turn them into ruthless organisms devoid of human mercy and intellectual logic. Fear can drive humans to give up their best-ever given trait: humanity...

“Satire and comedy might be one of the very few antidotes against fear. It liberates your minds. It sets your judgment free. And that is why it is a threat. And that is why people who use satire will be alienated, marginalized or even scared off.”

Youssef sees some hope for the future and you can read a transcript of his entire speech here.

On the day Youssef's show was canceled, Jon Stewart opened his program with this heartfelt report:

Thank you, Ronni. I KNOW exercise is good for a zillion reasons ... but I'll always read/watch/listen to anyone or anything that might inspire me to get back to doing it. Maybe Dr. Mike Evans will be the one.
John Oliver is brilliant ... and bless Jon Stewart for keeping the world's eyes on Bassem Youssef.

When watching or listening to any so called "informative" program whether it be Dr. Oz, Rush Limbaugh or the History Channel, one must always remember that they are in the business to entertain and by doing so, improve their ratings. Keeping that in mind, take everything with a grain of salt.

You can search census records without going through any of the sites like ancestry.com.

I'll bet those younger women think gray is cool only because they know they won't be mistaken for old women. Personally I love gray and wish my salt-and-pepper would hurry and turn solid silver. I so envied a neighbor who was completely gray at 30. She wore vivid purple all the time and was absolutely stunning.

Wonderful lessons this week, thanks.

Brenda: but how does Ancestry.com get away with charging for - and making money on - information they took from the government that is (supposed to be) free to everyone?

I think "Ancestry" charges because of the time it takes to do the research.

My sister is an avid genealogist and spends hours trying to find the proof of a single ancestor. She also spends a lot of money copying all of the documentation. It isn't as easy as it sounds to fully research one's ancestors.

For example, if you are tracing the family tree of a great grandmother you have to find two references to the person you believe to be a relative before it is considered valid. The further back you go, the more difficult it is.

Records were not always kept well (Quite often the Church kept the records)and the Bible of genealogy seems to be the LDS search center. They do have a free website but it is still very time consuming. That is especially true if the names are common ones.

In my case the maternal names are Spencer and Clark. There were a gazillion Clarks in New England in the 1600's and the last I knew my sister was having trouble proving the father of one of our ancestors.

My great grandfather was George Clark and to make matters worse that seemed to be a very popular name and was carried down from father to son. She is very sure she has found the guy, but without two ways to prove it she is stuck.

Another thing, if you want the birth/death certificate of an ancestor the county of record will charge for a copy. While it is in the public domain, you would have to personally go to the county clerk to get the document for free. That is not very practical.

I hope I am giving correct information as I am repeating what my sister told me.

Ancestry is providing people with the ability to search (poorly) indexed copies of the census, though honestly many of them are next to impossible to read.

Having been a genealogist for years before the Internet came along reading the census was slow, painstaking and expensive, as was any research done to document your ancestors.

And after moving to Canada American records were out of reach. I'd send the letter, the self addresses envelope, the obligatory $5-20 required and get back a scrawled note, "We don't ship records out of country." (They always kept my $ though).

I tried giving the $ to various cousins with the idea that a copy of the records would be mailed to me. One got them and then kept them, refusing to share, another got them but it took her a year to write to tell me what she found, and she never did send a copy.

With Ancestry I have access to records from all over.
And while I get irritated by the many people who think that copying others' work without checking to see if it's the right person, or the right information, the Internet has certainly made genealogy easier.