Snapshot of 65 and Older Age Group in the U.S. 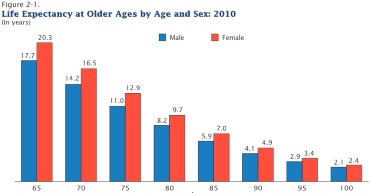 Those facts are from a report issued this month by the U.S. Census Bureau about health, economic situation and social characteristics, among other data, of the 40.3 million Americans who were 65 and older in 2010, along with the same historical statistics from the year 2000 and projections to 2050.

Here are a few facts to pique your interest.

Death rates declined for the 65-plus populations (other age groups too) between 2000 and 2010 but it was the same old, same old diseases – heart disease and cancer being the top two – that carried elders away. 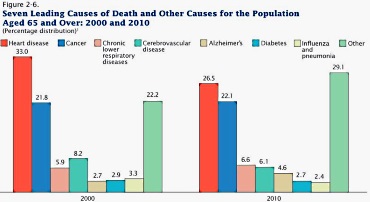 This one isn't going to remove any fears most of us have about dementia. Here's a chart from the study showing the percentage of the 65-plus population with cognitive impairment: 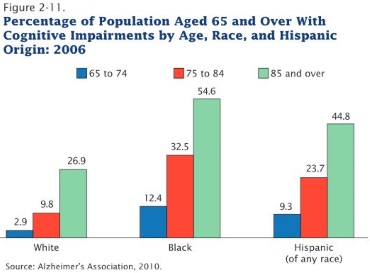 Social Security leads the way in sources of income followed by earnings, pensions and asset income. 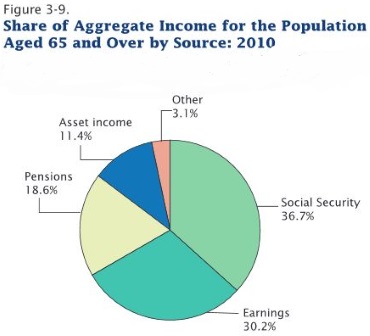 Social Security plays very different roles in the lives of people in the lowest and highest income quintiles. It provides an average of 84.3 percent of income for the lowest quintile and only 17.3 percent for the highest quintile. (See page 86)

The number of veterans in the 65-plus cohort surprised me – a total of just under 42 percent which tells you how many more of the population served in World War II, Korea and Vietnam than more recent wars. 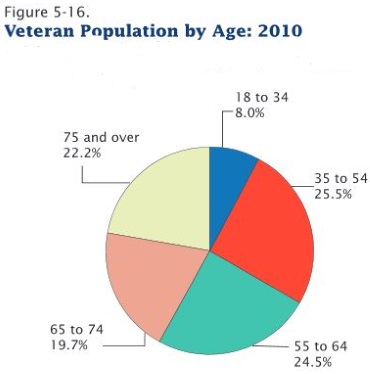 This doesn't scratch the surface of the information you can find in the full 65+ in the United States: 2010 study. I got hooked for two hours.

Don't let the total of 192 pages put you off. Most of it is charts, tables and citations and unlike many such reports, the writing is easy to understand, written with non-statisticians in mind.

Like polls, my view of most statistics seldom goes beyond their being a guidepost, at best. With that mediocre opinion, here are some thoughts: In Figure 2-11 - why Hispanic origin (wouldn't that come under Race?) & why not sex or income range? Or group living vs. alone?

The average income drops are shocking and should be on a front page. Aside from those of us over 65, I question how many are aware of this. As the aging population grows larger, and likely longer, so follows the impact on everyone, economically and morally. Is our society up for this?

In the Income chart, I'm guessing "Earnings" refer to stock, fund income, etc., rather than from only working 9-5.

While heart (&cardiovascular) problems are the leading death cause, "Other" is second - I assume this refers to "old age", accidents or related to, unknowns - this seems worthy of exploration and how many of these are preventable.

In 5-16 chart, may the numbers continue to decline!

Many or perhaps all of these charts are heavily influenced by income status, lesser so by quality and quantity of education, living locale and so much more. And other stats and studies have been done on what I consider just as important - one's state of mind and how that plays into these figures. I think these are irrelevant when a government provides reliable, good care for all elders in terms of housing, health, and adequate income for everything else. If worry and stress over daily NEEDS were off the table, would these numbers change? I think we'd be amazed...

The assisted living and senior community people have also read these stats and, unlike the government, are making plans for the increased population of older folks. Construction of senior residences are at an all time high. Unfortunately, the problem remains as to who and how to pay for this. I appears that nobody is addressing this issue. Statistics are great, it's what one does with them that's important.

For example, according to statistics, those of us nearing 90 should live 2.9 more years. In my case I have a strong heart and no history of cancer. But I could fall again and the next one could be the end for me. On the other hand, I could make it to 100. So I just ignore statistics as they might apply to me personally.

I admit that they are fun to read, but no more meaningful than a horoscope.

I'm with Suz in wondering what that chart reflecting cognitive impairment rates might look if stress was not through the roof for so many people. I was surprised by those figures, because as much as I've been reading about dementia over the past four years, I don't think I've seen anything reporting such a dramatic difference based on race and ethnicity.

And, while I would like to dismiss such data, as Darlene does, with no more meaning than a horoscope, I can't. I know better, having watched some local indicators during the early 2000's and bringing my concern to co-workers, to no real avail, probably because there was really nothing they could do. That was just a few years before our city became one of those with the highest number of foreclosures, highest unemployment and most severely impacted economy as the economic crisis of 2008 hit. We're still struggling and there appears to be no significant relief on the horizon, only further advancement of the indicators connected to increased challenges.

I agree that statistics overgeneralize; and the government should -- will have to -- do more. But beyond govt. policy, and the fates, both of which are largely out of our control, to me the message for individuals is how important it is to get an education, try to get a decent job; and then stick with it. And for those of us for whom it's too late for all that: stay active and maintain a good attitude!