UPDATE: Please remember (in regard to the Vitamin D item below) that no one, even a physician or researcher I have not vetted, may advise, suggest or imply in this blog that any treatment - even non-prescription drugs - should be used. You may explain what works for you but only in that personal, singular context.

Have you read the 50 Shades of Gray books? I haven't but there has been so much talk that I certainly know the general idea.

In this video, the “Elder React to” group is back, this time watching the trailer for the movie of the notorious series – and reading passages from the books too.

[NOTICE: Parts are not safe for work, grandchildren and starchy types]


AN OLD CAT'S ADVICE TO THE NEW KITTEN

With more than 15 million views on YouTube, this video is likely to have passed your way already. But just in case...

There I was one morning, minding my own business, drinking coffee and checking the upcoming weather when I ran across this story:

”Buried beneath the snow-covered ice of the wind-battered, subarctic earth, Alaskan wood frogs freeze solid each year in order to survive the harsh, unforgiving Alaskan winter.

"'We found they can survive far longer than you can see something stay in your freezer,' Larson said, adding the frog's unique biology prevents its cells from dehydrating during freezing and they do not become susceptible to freezer-burn.” 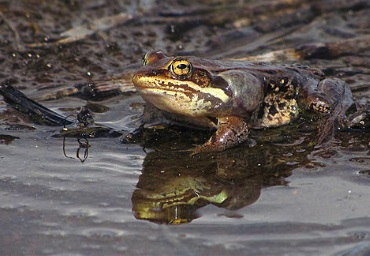 What an amazing nature story. Go read it here.


BORED IN THE OVAL OFFICE

Kids. There are almost as much fun as internet cats.

I've spent time in the White House Oval Office – once during the Reagan administration and again when Bill Clinton was president. It is impossible to be unimpressed whether meeting the president or contemplating the history that is made there day in and day out.

Given my personal awe of the surroundings, I laughed when I saw this photograph of a Secret Service agent and his wife with President Barack Obama while their son takes a dive on the sofa. I hope the kid will come to love the photo when he's grown and keep it around in a frame. 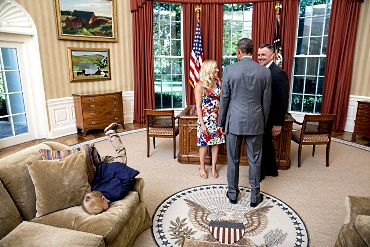 So many readers sent this TEDtalk from 71-year-old writer Isabel Allende that it seems redundant to post it. Maybe, instead, it is an indication of wide interest.

Personally, I'm not convinced that passion is what I'm looking for in old age but whether or not, Allende seems oddly dispassionate about it.

This looks like a standard mind reading act although more detailed that most. Keep your eye on it and thank Darlene Costner for sending it.

After a physical examination last January, test results showed that I was in the normal range in all health data benchmarks except for one – I was deficient in vitamin D.

The doctor said, “Don't worry about it. Everyone in Oregon is vitamin D deficient - not enough sun here. Just take this supplement every day and you'll be fine.” I do that now without fail and after this new study, I'm glad.

“The international team followed 1,658 men and women aged 65 and over for six years and were surprised by their own findings.

“For increased Alzheimer’s risk, those figures were 69 and 122 percent.”

It's a moderate-sized study and needs some additional work but I don't think it can be dismissed. There is a lot more detail and good information in the story at Senior Planet.

The picky among readers might say it's not nice to scare people. Maybe so, maybe not. But this sure is funny and let's thank Larry Beck of Woodgate's View for sending it.

Last year my doctor put me on supplements for a Vitamin D deficiency and the cramps in my calves and feet stopped...Now you have given me another reason to take my vitamins!

Thanks for the Vitamin D info.

Vit D deficiency has also been linked to depression & I take mine faithfully for a deficiency. My FMD told me that it is being researched extensively (not sure by whom)because scientists are becoming more convinced of it's value & benefits beyond what is currently known. How many of us were given cod liver oil in winter by our moms? I know I was! And I'm 77 yrs. old. Have a great w/end everyone. Dee

The photo from the Oval Office is a treasure. Since I've been back on vitamin D I sleep better and like SusanG, m foot cramps have gone away.

I have neither seen nor read the "Gray" books. Too much violence and disrespect for women in the world for me, and I think this just is just more of the same.

Those of us growing up in northern states might remember the cod liver oil given on graham crackers at school, though I'm not certain whether vitamin D was the reason.

I live in a sunny climate and walk almost daily in morning sun - still need supplements.

Now I wonder if I am getting enough vitamin D. Although I certainly see enough sun, I try to avoid going outside when it is shining due to having had 13 skin cancers excised.

I take calcium with Vitamin D and I think I had better check to see if I am getting enough. Thanks for the 'heads up'.

My calcium supplement includes vitamin D. Apparently my doctor thinks that's enough (along with daily multivitamin) here in mostly sunny Colorado. Still, my next checkup is next month and I think I'll ask about it.

That Oval Office photo will be a family heirloom for sure.

Yes, passion does seem to be the key. :)

I've been on Vitamin D supplements for years and I'm in the bright Colorado sun daily walking my dog several times a day. I hate to think what I would have been like without the supplement because my senior moments get more frequent as the years pass.

Allende "oddly dispassionate"? My experience of that talk is entirely different; I find her vital, wry, and more willing to be open to ideas and experiences than many persons half her age. She means not the limited definition passion as the realm of sex, but rather full engagement with life.

I agree with Duchesse above. I don't find Allende "oddly dispassionate" at all. If she sounds that way to some I wonder if it's because English is her second language and she talks slower (word searching) more than some of us are use to hearing.

Liked the Shades of Gray. I like there people. I take prescription vit D. My level was 11, normal is 50. The Friskie cat is always good to see. I have seen it many times.

Thanks for the video, Larry. It showed a certain enthusiasm by the creators. It revealed passion from a little dog. I don't think he was wanting to scare people, nor trying to be a dog-star. I hope his passion was for a bone from his dog dreams.

Yes, I'm the picky reader who has issues with the spider 'prank' because I worry that people will try to copy it. Personally, I like spiders. But because I have two close relatives who are seriously arachnophobic I have come to understand just how deep this phobia can go. It is not just a trivial thing. The fear they feel is genuine and affects them physiologically to the extent that to play a trick like this on them would not only result in serious trauma and months of nightmares but could actually cause them literally to die of fright.

The Vit D add-on to a standard blood panel runs about $60-70. Well worth paying for even if Medicare won't, seeing how vital this particular vitamin has turned out to be. Many doctors either don't know or don't care. It pays to be nice to your doctor.

I'm surprised by how many elders I know who pride themselves on not being 'pill takers' of any kind. I'm not a drug pusher, but this is one of the areas of human endeavor that has improved the quality of life for many.