You are STILL not getting a regular blog post. I'm going slowly, carefully and taking a lot of rest breaks so I don't pull out what's left of my hair.

It is times like these that I desperately crave cigarettes. To Nancy Wick who suggested yesterday that in place of tobacco, I might toke a little weed - nice thought, Nancy, but I really do want to finish this chore in a reasonable length of time.

Moving right along, today, I will regale you with my first-ever tech troubles story.

It took place back in the mid-1980s when personal computers were relatively new to the general public. I was sort of familiar with them from work (actually, only at the network video library for searching footage; we still used typewriters at our desks) and a few tech-savvy friends.

It cost a frightening $1500 and if you recall, in those days they looked something like this: 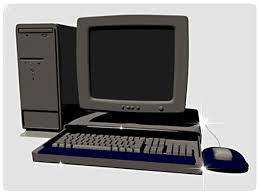 The machine was delivered with all its parts: tower, keyboard, mouse and gigantic monitor. I unpacked it onto the dining room table along with the two-inch thick user manual. Remember, the book was for DOS then – no graphical interface as Windows hadn't arrived just yet, though it soon would.

Not to mention, this is important to the story, that the manual was written by and for techies. Not of word of it made sense to me.

The parts sat there on the table for a few days. The manual (that might as well have been written in Swahili) scared the crap out of me. At last, I decided to tackle it.

And here is what the mostly obtuse computer manufacturing industry did right and did right from the beginning: each plug was a different shape so that there was no way I could mistake which cable fit where. No manual needed.

Remember, if you had a pre-graphical interface computer, that there were just words on a black screen – usually orange or green. Mine happened to be orange. And right in the middle of the screen, it said:

I thought I had “fatally” broken the computer. I quickly turned it off (who knows, it might explode) and wondered if I could get back my $1500.

And so it sat until a technician could make time to come to my house a few days later to make things right.

Okay, I admit it: way too long a story for such a lame punch line so as a reward, here's some cool news.

Yesterday, Jon Stewart's replacement for The Daily Show was announced. He is Trevor Noah, the show's newest correspondent with just three appearances under his belt. 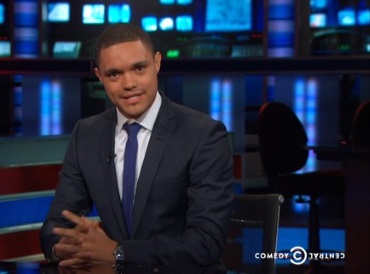 ”Noah, who is 31, brings an unusual background to the job: He's from South Africa, the son of a black woman and a white man, speaks six languages, and may be better known overseas than he is in the United States.” reports The Atlantic.

“(To give The New York Times a comment about his appointment, he had to call from a tour stop in Dubai, where he relayed his reaction: 'You need a stiff drink, and then unfortunately you’re in a place where you can’t really get alcohol.')”

You can read more at The Atlantic and undoubtedly, all over the web.

Ronni, I remember the early days of computers. Didn't have one at home, but at office. Couple of years earlier, I enrolled in a "basic" computer class thinking I would learn the basic functions and how-to use a computer. Imagine my surprise when the subject was actually writing basic language... To this day I don't know what that was was all about.. I didn't go back to the 2nd class.

I don't know what to think about Trevor Noah taking over for Jon Daily, but I'm more than willing to give him a chance. They must know he works well with the behind the scenes crew and is a quick study. He's known better around the world than he is here so he's not as "green" as he appears to us. And maybe if they'd put someone in like Tina Fey too many people would already have their opinions formed and not tune in. I didn't know Jon when he first started, so hopefully, we'll grow to love Trevor, too.

OMG! The not so "good old days" of DOS! I had hoped that awful memory would stay buried forever.
Never did I feel so inadequate as when I was learning DOS. It was like I had a brick wall blocking the part of my brain responsible for learning and retaining the commands for this operating system. Had Windows not come along, I just know I would have had a career of sweeping sidewalks; not the best way to support a family.

I didn't remember Trevor Noah, the name or the face. Better this way, I think, than if they'd chosen anyone I already knew. Nobody I knew could fill Stewart's shoes, and if they aren't going to get rid of the show altogether, which would have been my choice, then this is the next best thing. I didn't watch because it was The Daily Show. I watched because it was the Jon Stewart show.

Continuing condolences on the computer problems.

While I have no problem with Trevor Noah replacing John, I do have a problem with the reason, and it's not what you think. It has to do with Comedy Central wanting to reach a younger and hipper audience. Evidently Mr. Stewart skewed a little too "old" for CC's comfort. Those 18-35 year olds weren't "Tweeting" enough or "I M-ing" enough. I'll give him a try, but as soon as he starts mentioning pop stars whose names I don't know or references "music" I don't listen to, I'm gone.

Now, as far as your tech problems go, Have you done the "Restore" thing. Going back to a time when your computer had no problems. It always works for me.

Ah, yes, "fatal disc error"! Back in the day we used to see that and the "blue screen of death" fairly regularly. Fortunately, neither message meant what it said most of the time. A plaintive call for help to my then-tech-obsessed husband and a few reboots later, the old reliable c:> would usually reappear.

I started out on the computer trail with WebTv-does anyone else remember that? Anyway, it was Fun, not nearly as troublesome as my pc, and help from other WebTv users was readily available. I could do as much and more with that system than now...at least for my limited needs.

My biggest problem is I don't speak 'computerese'. I try, but I was lost right from "default". And forget the manuals...I might as well read the ones written in Chinese or Arabic...too high-tech for me. I tried to hook up wireless headphones to my TV yesterday...never completed the process.

Lola, I remember WebTv very well. My friend had one and I used it often.

Five star rooster dances happen when one of us gets trapped by a tech problem.

It's a love hate thing.

Ronnie, I didn't make it up. I was referring to this story in the "Holiiwood Reporter"

The 31-year-old will offer an infusion of fresh blood as Jon Stewart's viewership skews older than that of most series on the youthful network."

As far as John Stewart's frequent references to pop culture. He usually makes them mockingly to make a point.

I'll go back to watching "The Daily Show" when they hire a woman host.
I love (hate)how all these late night shows have to go to England, Scotland or South Africa to find male "stars" when there are so many fantastic comediennes, here, at home.

My mother called, abashed, to report that she had killed the computer. That *fatal error* screen is just awful.. as are all tech problems. I know I've got to pay for help (or call my techie brother for phone support) when I start longing for paper files.
a/b