“At 80, We Understand We are Extraterrestrial”

Maybe you know of Donald Hall. He is a well known as a poet. In fact, The Library of Congress appointed him poet laureate in 2006. 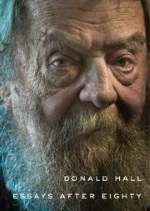 He tells us now in Essays at Eighty that the muse of poetry has abandoned him but the essay is not new to him; he has been writing them along with children's books, plays, memoirs, biographies, critiques, sports and textbooks as prolifically as poetry all his many years. Writing is what Donald Hall does:

”Exercise is boring. Everything is boring that does not happen in a chair (reading and writing) or in bed.”

I couldn't agree more. Even though I do force myself to do a few other things, the chair, the laptop and the bed (where I read, make notes and watch movies) always beckon.

Most of the pieces in Essays after Eighty have been previously published but they hold together as though they were written to be collected in just this manner. At 86, Hall is a treasure on the subject of getting old, the changes, disappointments and pleasures. He is, at moments, poignant, lyrical, direct, elegant, inspirational, wise and in this case, blunt about the dwindling of life:

”I feel the circles grow smaller, and old age is a ceremony of losses, which is on the whole preferable to dying at forty-seven or fifty-two. When I lament and darken over my diminishments, I accomplish nothing. It's better to sit at the window all day, pleased to watch birds, barns, and flowers. It is a pleasure to write about what I do.”

The speed of time – fast or slow - has been a mild obsession of mine since childhood and I often write about it here. Even so, Hall has a closely observed sense of the slipperiness of it in old age:

”In the past I was often advised to live in the moment. Now what else can I do? Days are the same, generic and speedy – I seem to remove my teeth shortly after I glue them in – and weeks are no more tedious than lunch. They elapse and I scarcely notice.

“The only boring measure is the seasons. Year after year they follow the same order. Why don't they shake things up a bit? Start with summer, followed by spring, winter then maybe Thanksgiving?”

Did I mention how funny Hall is? Funny and real all at once, like this:

“However alert we are, however much we think we know what will happen, antiquity remains an unknown, unanticipated galaxy. It is alien, and old people are a separate form of life.

“They have green skin, with two heads that sprout antennae. They can be pleasant, they can be annoying – in the supermarket, these old ladies won't get out of my way – but most important they are permanently other. When we turn eighty, we understand that we are extraterrestrial.

“If we forget for a moment that we are old, we are reminded when we try to stand up, or when we encounter someone young, who appears to observe green skin, extra heads, and protuberances.”

Essays at Eighty is filled with truths simple and profound beautifully, maybe perfectly, told. A book to hold close. To read again. And again.

At The Elder Storytelling Place today, Chuck Nyren: In and Out of the Hospital

Thanks, Ronni. I ordered the book.

wonderful! I ordered it too. Thanks to your lovely presentation of it here.
Donald Hall is a gem.The older I get, the more I appreciate--and need--humor. And people like him.

And, one more Thanks so much - I ordered it as well. Also the memoir of his wife's, Jane Kenyon, illness and death at 47.

The book is on its way to my iPad Kindle app. Lately I'm watching for road maps and inspiration on how to accept the losses of aging with grace. I tend to not go gentle into that dark night... And the nights and days get darker and darker... literally.

I too have ordered this book for its obvious humor (most of all) but also with his writing about the experience of growing old itself. I've had a bad year with a broken kneecap and then a bone in the foot, both of which left me feeling very old indeed. Now that the bones are almost healed and spring is looming, Donald Hall's writing will be the icing on the cake. Thanks for your post today.

Oh boy, can I ever identify with Donald Hall. The circles are indeed getting smaller.

Another friend died Saturday and each death makes me aware of my own mortality.

Like Tarzana, I don't think I will go gently into that good night. Life is still sweet, if diminished.

Darlene.... and each death makes you aware of your own living. That is the brightness and inspiring meaning I got from Donald Hall's writing. We can do nothing about the diminish-ness that casts darker shadows for us, while at the same time only we can do something.

Awesome writing by this man.

Thanks Ronni
I ordered the book!

Eighty-eight today. I decided I will be the best 88 I can be. Even though the circles grow smaller.

You know what I find boring? Bathing and brushing my teeth. Before you get alarmed, let me assure you I intend to keep doing both every day. But the movements are so identical to the movements I have done thousands of times before! I love being clean, I just am bored stiff with getting there.

What I find boring is cutting my nails. Why do they grow so fast? Then I remember the alternative ...

I love Donald Hall and have several of his books. Thanks for highlighting him today.

I love Donald Hall's writing and am saddened that his poetry muse has gone on to another writer and left him behind..but as an essayist myself, I'm so glad that he's decided to return to this genre. Chalk up another order for his book..Ronnie, you'll soon be as popular as Oprah is when it comes to book reviews..at least amongst our elder sisters and brothers.

Elle your neighbor in Beaverton (aka Plantcrone)