I feel safe in saying that the majority of us at this blog have strong memories of the 1950s. And if not, at least a few memories of the era because decades don't come in neat packages that begin in years with a zero and end in one with a nine.

Here's a well done reminder – so familiar and so foreign all at once.

From Jim Stone – this will break your heart in the best way possible. (If the translations at the bottom of the screen are too small to read, click the YouTube logo in the lower right corner to watch it larger format at the YouTube page.)

I was shocked to find out that this classic image from cartoonist Peter Steiner that we all know so well was published in The New Yorker way back in 1993. 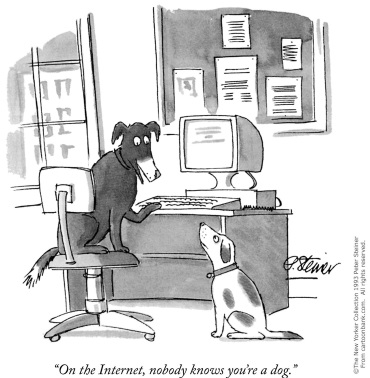 It became and remains an icon of the internet age. Then, just a few weeks ago, the magazine published an update by another cartoonist, Kaamran Hafeez, acknowledging how much has changed in 22 years. 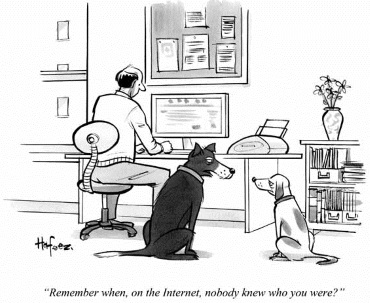 If that's too small to read, it says “Remember when, on the internet, nobody knew who you were?”

You can see more Peter Steiner and Kaamran Hafeez cartoons here and here.

On his Last Week Tonight essay last Sunday on HBO, John Oliver took on voting rights and U.S. territories. I felt ashamed when I watched this particularly knowing that no one with the power to change it will do anything in my lifetime.


WISDOM FOR THE ART OF AGING

Much honored Irish geriatrician Desmond O'Neill is among the growing number of ageing experts who refuse to support the age deniers' idea of growing old.

“Henri Matisse did not successfully age in a physical sense. After decades painting standing up, he was forced to adjust his style radically sitting down. 'Through his disability, he grew and changed and produced something new,' O’Neill said.

“'So what we’re actually talking about is ‘optimal aging’ that understands the existential hits that we’re going to take in terms of disability and creates a system that frees you from unnecessary constriction by that disability,' O’Neill said.”

What is enormously important and exciting, he says, is that there is a “seismic” change in attitudes among the people who work in various fields of ageing (and, I might add, it's about time).

“'The narrative has been a simplistic one of loss and decline,' said O’Neill, professor of Medical Gerontology at Trinity College and consultant physician in geriatric and stroke medicine at the Tallaght Hospital campus. 'There’s a huge swing back against that.'

“O’Neill noted, 'Older drivers have the highest levels of illnesses that might affect driving, yet they’re the safest group of drivers on the road. So, their adaptive abilities, their mastery of how they engage with their environment, is brilliant.'

“There is now a fascinating body of literature on the older worker, according to the Dublin physician.

“'If you have come down in the Hudson and survive, do you want an almost 60-year-old with all his life experience or do you want a 25-year-old?” O’Neill said, alluding to Chesley 'Sully' Sullenberger’s successful navigation of Flight 1549 on Jan. 15, 2009.”

I quote at such length because in my mind, O'Neill has taken the place of the late geriatrician Robert Butler is consistent and important reminders of what ageing can and should be.

I have been a big fan of Christopher Walken for most of my adult life and even I did not think of him as a dancer. In fact, he originally trained in dance for musical comedy.

Here is a wonderful montage of a lot of the dancing he has done in films. The music is Gonna Make You Sweat (Everybody Dance Now by C+C Music Factory. (Terrific video editing too.)


HOW MANY DAYS OLD ARE YOU?

Silly statistic, right? What's the point? Who cares? Well, it got my attention and I wanted to know. These are my results counting from today. 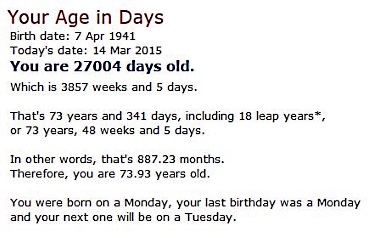 Maybe you're curious too. You can find out here and thank Darlene Costner for the link.

From Darlene again and YouTube tells us that in seven year since this was posted, it has racked up more than 17 million views. Have fun.

I want to get this posted before winter goes away for the year. I had never thought about drunk squirrels in my life but apparently it happens. Too many fermented crab apples in this case, they tell us.

Another 5* post this Sat. am. Brightened my otherwise gloomy morning. The Walken video is a pure classic. I've always thought of him as a superb actor & performer. And of course the 50s video was a real heart warmer. Thanks so much. Dee :)

Love Christopher Walken! Thanks for reminding me of his dancing and not his scary acts!
And Darlene! how do you do it?
I have just discovered that I am 31,771 days old. I can't decide whether I am elated or depressed--can you imagine just how many of those days I have wasted just fooling around? Now that's scary!
But thanks anyway.

Got a real giggle from the poor squirrel's dilemma! I saw something very similar in West Virginia when I was young where birds would feast on way over-ripe low-bush cranberries and end up falling off the bush and staggering around on the ground! Now I wish I had had a cell phone with a video camera in it in those days!

Great Saturday stuff again, as usual. The story about the drunk squirrels reminded me of a time my husband and I were plowing snow at a shopping mall parking lot and my husband ended up accidentally plowing a drunk seagull and his whiskey bottle into a snow pile. We were used to them eating popcorn from the movie theater as we'd plow but they always moved just as we'd get near them. This one didn't move and he ended up on the snow bank with the snow. The bird was so drunk he let my husband pick up him and check him out for injuries. Finding none, he put the bird in a cardboard box off to side of the lot where he could safely slept it off until morning. The bird was so glass-eyed and silly looking when it tried to walk drunk it wasn't funny.

Loved the '50's montage but the Walken clip disappointed with no cow bell scene from SNL. Just kidding

Excerpts by geriatrician O'Neill about the art of aging reminds me of Dr.William Thomas'book- "What Are Old People For?"

Thanks Ronni. You got my toes a tappin.

I hope someone took that squirrel's car keys away and called him a cab.

Images of the 1950's brought back so many wonderful memories. Those were the good old days!!!

The black hole got me remembering Rod Sterling's Twilight Zone. The ending was just like how Rod would end an episode.

You start my Saturdays off with a
laugh, a memory and a smile! Thanks.

What fun ... since I turned 73 years old yesterday to now have my time here shown not only years but so much more.

The Beautiful mother video is a lovely story of true love. I was sorry that the ad kept covering the translation, though, and had to watch it twice to be sure I was fully understanding the story. It was the same on You Tube.

And John Oliver did it again. He brought to our attention an injustice that the mainstream media never covers. We need many John Olivers to inform the viewing public of what really goes on in our country.

Another great Saturday of interesting stuff.

I really enjoyed the fifties piece, despite the reminder of how segregated a time that was.

It was fun calculating the number of days since my birth, despite the reminder that I am a Saturday child destined to work hard for a living.

The Black Hole was fun. If only greedy people would be sucked into black holes in real life. That could really be fun.

And I, too, was appalled by the John Oliver bit on voting rights (or lack thereof) last week and again today.

I enjoyed the 1950s, of course; but, I also recall our friends who died from diseases that have since been "conquered" and the all-white neighborhoods and the lack of opportunity for women and....

I wanted to add something else. I ironically had something in my inbox this morning referencing an article from the U-T San Diego newspaper reporting on a study of the cost of Alzheimer's and other dementias in San Diego County. It is estimated currently to a staggering amount between $13.5 billion and $27 billion, depending on the length of survival, and projected to be in the range of $21 billion to $42 billion by 2030.

In the mid-1960's Daniel Moynihan raised a concern about a projected growth of poverty and disparity between the wealthy and the poor, particularly as it affected African Americans. Moynihan's warnings were largely ignored by those with the power to seriously do something about them, and the chickens have, indeed, come home to roost.

About half of Lost in the Fifties was relevant to us in Australia. The small differences were interesting to me…
Our 45 records had a small hole, the same size as the LPs. I always wondered why Americans had that big hole.
The game that flashed by (and is on the still for the vid) was (still is, I believe) called "Snakes and Ladders" here. Some non-Oz people might think that appropriate.

Loved watching the iconic images from the 50's. It was interesting to see an image of a man in an iron lung and one of children crawling under their desks which was purported to protect them in case of an atom bomb attack.

John Oliver was brilliant and passionate and humorous on the subject of voting rights for people from Guam, Samoa, and Puerto Rico.

Terrific! Kudos Ronni. And you too, Darlene.

Peter--While the vast majority of the 45 rpm records in the USA had the larger hole, we (Hunky Husband and I) own a few with the smaller hole. Perhaps the shipments got mixed?