This idea seems to be growing around the world and it is such a good one:

”In exchange for small, rent-free apartments, the Humanitas retirement home in Deventer, Netherlands, requires students to spend at least 30 hours per month acting as 'good neighbors' [to the elder residents of a nursing home, reports PBS NewsHour].

“Officials at the nursing home say students do a variety of activities with the older residents, including watching sports, celebrating birthdays and, perhaps most importantly, offer company when seniors fall ill, which helps stave off feelings of disconnectedness.”

We first reported this kind of an arrangement here on Interesting Stuff last December regarding a college music student in Cleveland, Ohio. I think it is a sensational idea which should be expanded everywhere. You can read more here. (Hat tip to doctafil)

It was about two years ago that we first featured the Boston Dynamics four-legged robots. They keep improving and wait until you see what this one, named Spot, can do. Amazing. (Hat tip to Darlene Costner)

The webpage tell us that "Spot is designed for indoor and outdoor operation. It is electrically powered and hydraulically actuated. Spot has a sensor head that helps it navigate and negotiate rough terrain. Spot weighs about 160 lbs."

Out of existence, that is – another old favorite of mine, Pearl River in Chinatown. 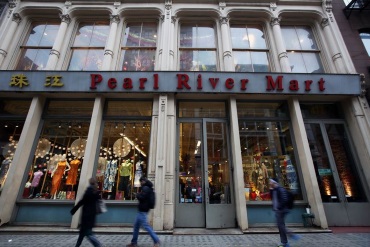 ”The store can no longer afford New York’s skyrocketing rents, driven in part by money from newly rich Chinese mainlanders.

Here's a look inside the story. (Photo credits: Hiroko Masuike) 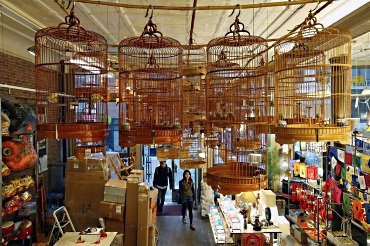 That does not begin to indicate how diverse the inventory is. I still have two pairs of fold-up mini travel scissors I bought there for a dollar each about 15 or 20 years ago. Until then I had no idea such a thing existed and they always are allowed through airport security checks.

Undoubtedly the site is due for another thousand dollar handbag store. Soon Chinatown too will be too pricey for all but the one percent. You can read more here and here.

It is no longer hyperbole to say there is no such thing as good consumer news about airlines. At least, not U.S. airlines. But look at the amazing efforts of Dutch airline, KLM.

Maybe you've seen the news about this. At a time when voter ID laws in more than a dozen U.S. states seek to reduce the number of citizens allowed to vote, Oregon's new governor Kate Brown signed a bill making registration nearly universal. Here's how it works:

”The secretary of state's office will regularly collect drivers' license data and 'provisionally' register people who aren't already signed up to vote.

“These prospective voters will be sent a notice giving them 21 days to let elections officials know if they don't want to be registered. As a result, Oregon will become the first voter registration system that is 'opt out' instead of 'opt in.'

“Newly registered voters will also be given information on how to register with one of the state's political parties. If they don't, they will be listed as non-affiliated.”

The new law is expected to add about 300,000 people to the voting rolls. Oregon was already the first state, 17 years ago, to enact vote by mail. Now, all the new voters, like every other registered voter in the state, will automatically receive a ballot about 20 days before each election.

On John Oliver's HBO show last Sunday, he snagged an interview recorded in Moscow with Edward Snowden on the subject, of course, of government surveillance.

Because it's Oliver, it's funny and it's profane and extremely important. Get a cup of coffee or tea, settle down to watch – and laugh too.

Oliver's dick picture rant has now inspired a new website – cantheyseemydick.com and it is not joke. It is from the Electronic Frontier Foundation which has been working hard from the earliest days of commercial internet to protect our privacy online.

The National Institutes of Health website for elders has recently published three, succinct, good pages about old age and skin – what to expect as we get older – age spots, skin tags, etc. - and how to care for ageing skin. As the site explains, as we get older,

”...skin becomes thinner, loses fat, and no longer looks as plump and smooth as it once did. Your veins and bones can be seen more easily. Scratches, cuts, or bumps can take longer to heal.”

Maybe not to everyone, but to me there is something inherently funny about ukuleles. They seem to be such dinky little, almost make-believe instruments. And then you see something like this, the Ukelele Orchesra of Great Britain performing The Theme from Shaft.

There are many more performances from the Ukelele Orchestra of Great Britain here.

Well, I don't know about that headline but that's what it says on the YouTube page. It's a whole slew of baby animals having fun.

Those four-legged robots need faces. It was amazing how they can go up steps like they do. And someone has a sense of humor at the end when the screen said, "No robots were hurt making this video."

The Netherlands has the right idea of pairing up young people with the elderly. Here in MI the seniors at the local high school get volunteer credit for helping out at our senior hall, serving food at our luncheons. It's not much but it's a start. They have to get 20(?) community volunteer hours in to graduate. After diner is served they each have to tell the group something about themselves (for public speaking experience).

The Dutch have been coming up with good ideas ever since they decided to buy Manhattan. Unfortunately, we here in the USA are much too uptight and would never permit non-licensed, non-professionals living with seniors.
And speaking of Manhattan, I am sorry to hear about Pearl River Mart's eminent demise. It was my go-to store for unusual gifts as well as houseware items.Perhaps there is a place in Queens they can move to.

Thanks for a great collection of "interesting stuff"! I love your eclecticism.

Jean and Bruce...
If you follow the TimeGoesBy link in the first story, you'll see that the U.S. was ahead of the Netherlands in trying out college housing in nursing homes.

I guess I failed to make my point that I like how the idea, however slowly, is expanding around the world.

Thank you so much for that John Oliver video!!! I only see him on your blog and I look for him every Saturday. He's always worth listening to but the interview with Edward Snowden was WONDERFUL, both for information and for a few laughs.

Wish I could see the John Oliver clip. I've enjoyed all the ones you've posted before. Sadly, we can't view that clip here in UK.

I never really understood how the government could get my intimate e-mails before Edward Snowden explained it. All of those pictures that Google is so kindly (?) storing for me can be in some government surveillance program. Fortunately I don't have a dick so there are no photos of one there. :-)

John Oliver certainly asked the right question, "What kind of a country do we want to live in?"

The cavorting baby animals made me feel better and it is a video to keep and look at when things go wrong.

Oh, I LOVE the lost and found service!

Sweetie, my video-loving cat, seemed to be fascinated and disturbed by the "horse" robots (she didn't paw the keyboard or screen like usual). Oddly enough, I actually had a visceral reaction to seeing the robot creature getting kicked!

Loved the Ukelele Orchestra's performance and the jokes at the end.
For Marian, you can catch John Oliver on YouTube ... Last Week Tonight. I watch his weekly Sunday show on Mondays here in Italy.

Love the robots. Love all the interesting stuff you find from around the world.