I've seen this video before – and laughed out loud – but I can't find that I ever posted it. I can't imagine why not. It a funny reminder of the familiar saying, old age and treachery beats youth and skill every time. Thank jane d for sending it.

Business Insider says these nine facts will “blow your mind.” Typical media clickbait – no, they won't blow your mind but they ARE interesting although I suspect further research will one day change some of them.

There is more about this at Business Insider:


WHAT JON STEWART HAS BEEN DOING IN SECRET FOR YEARS

Three years ago, Jon Stewart quietly started a program to help train military veterans who are interested in a career in the television business.

”In 2013, American Corporate Partners, a mentoring nonprofit group, asked Mr. Stewart to take a veteran under his wing and help find that person a job in television, which involved making a few calls,” explains

It's been going on every since without publicity but now that Stewart is preparing to leave his show, he wants others in the business to take up some slack so is

”...urging other shows to develop their own programs to bring more veterans into the industry.

“'This is ready to franchise. Please steal our idea,' Mr. Stewart said in an interview at his Manhattan studio recently. 'It isn’t charity. To be good in this business you have to bring in different voices from different places, and we have this wealth of experience that just wasn’t being tapped.'”

Last Week Tonight was on hiatus last Sunday but John Oliver and his crew did not leave us entirely bereft of the comedian's particular kind of humor.

Take a look at this short video they made for internet only: a bit of insight into what goes on behind the scenes at Last Week Tonight. (For those of you with HBO, the show returns from hiatus tomorrow.)


THE BRIDGES OF PORTLAND, A DRONE'S EYE VIEW

Portland, Oregon has been known for eons as the City of Roses (among its other names is Stumptown) but it is also sometimes called Bridgetown referring to crossings of the Willamette River that divides the city east and west.

Within the city limits, there are eight bridges, each one an entirely different design. Recently, a film company used drones to make a lovely little movie about them. Take a look.


HOW HUMANS POPULATED THE GLOBE

Based on the National Geographic Genographic Project, this animation show how humanity spread out from its beginnings in Africa to eventually fill the whole world.

You can find out more about this project here.

Every year, more than one-third of people 65 and older take a fall. Among that group, 1.6 million end up in emergency rooms and in fact, falls are the number one cause of fractures, loss of independence and injury deaths in elders.

The National Institute of Health tells us that sensible shoes go a long way to preventing falls. Choose shoes, they say that

Here is a graphic about safe shoes: 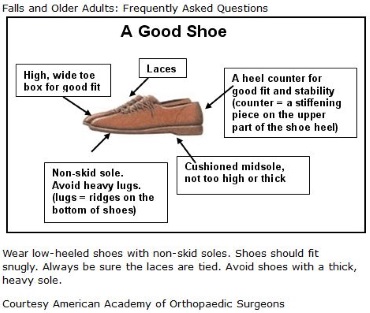 They aren't all that cute but better safe than fashionable. You can see a larger version of that image here.

In 77 days, Social Security will celebrate the 80th anniversary of the day, 14 August 1935, that President Franklin D. Roosevelt signed into law the Act that has been keeping elders out of poverty ever since.

The Social Security Administration has launched an anniversary website counting down to celebration day. There you will find histories, trivia quizzes, a timeline of milestones during the acts lifetime and even a collection of public service announcement videos about the program.

This short one with a cat explaining how to sign up for Social Security is fun.

All of the above and more here.

There used to be a live camera at Round Island in Alaska where thousands of walruses and other mammals congregate every year, but then it lost its funding.

Now, explore.com and several other benefactors have come to the rescue and the cam has been restored.

“'It was just serendipity,' said Charlie Annenberg Weingarten, founder of Explore.org, according to Mediaite. “'I would have done it anyway, but this is really a cherry on top, knowing we were able to assist them in furthering their research, their love of their work and be able share with the people.'”

Here's the live feed. You will find more information and more live animal cams at explore.com.

The depth of Jon Stewart never ceases to surprise me. Thanks for posting the above story on him. I am going to be so sad to see him leave the Daily Show behind but I hope his next re-incarnation will be even better. Fingers crossed.

Just think. All of those older bridges were constructed without the use of a computer. Just a couple of guys with a pad and pencil and ,maybe a slide rule. And yet, they have stood the test of time.

Loved the "Wrinkles are believed to help processing power" in the Brain Facts.

Oh, Ronni, I wasn't ready for LE SERVEUR. Thank you, even though my ribs hurt!

I loved the shoes to prevent falls article. Will someone tell me where to buy shoes like those shown? I wear an 8W. I have searched the internet and have found nothing for years.

Thank you for posting the video of Portland's magnificent bridges. The view from the air is spectacular.I love Portland for many reasons, but the bridges are a special delight.

I'm not trying to shill for a company, but for those of us who can't or don't want to shop in person, Footsmart puts out a beautiful mail order catalog of great looking shoes that are also very comfortable. They're expensive, but extremely well made. Google Footsmart and get on the list and you'll never be without a catalog again.

I love any bridges and all those different ones in the same city were a treat. Thank you!