MEMORIAL DAY
That's the title of a poem for today from Marc Leavitt who blogs at Marc Leavitt's Blog.

On this day we praise the fallen, who fought and died in war;
The men who gave their all to guard the freedoms we adore.
Some watch parades that celebrate their sacrifice for peace,
Recalling ancient battles in the wars that never cease;
And others make this solemn day an opportunity
To pass the day relaxing, scorning all solemnity.

No use to scold the shoppers who descend upon the mall;
Or try to shame the picnickers at gatherings great or small;
Or rail against the worker drones who pass the holiday
In sleeping and drinking; to them, it’s just time off with pay.
Brave soldiers, lying in their graves, invisible, alone,
No longer care in any way, they’re merely heaps of bone.

Marc is a regular contributor to the Time Goes By companion blog named The Elder Storytelling Place. Today's potpourri post gives me an opportunity to introduce TGB readers who may not know that for the past eight years (!), hundreds of elders have contributed stories and poems that are published one at a time, Monday through Friday.

Plus, in the archives now are more than 2,000 wonderful stories of love and loss, of living and dying, of reminiscence and observation and inspiration - sad and happy, poignant and funny.

If you haven't done so, give it a try and note, too, there is always a direct link to The Elder Storytelling Place here in the TGB left sidebar. There is some fine poetry and storytelling going on over there.

BILL THOMAS, KAVAN PETERSON AND ME
One day last week, after knowing them both online for nearly a decade, I finally got to meet geriatrician Bill Thomas and his producer/editor Kavan Peterson in person.

It was a splendid event for me and I'll tell you more about it on Wednesday. Meanwhile, on Sunday Kavan posted a photo of the three of us to his Facebook page. You can see it here.

BOOKS, BOOKS, TOO MANY BOOKS
Now that I have released myself from writing essays for this blog Tuesdays and Thursdays, I have time to putter about and think and read in a more leisurely manner that is so much more fun and, even, edifying than rushing through life as I have done too much of for the past 10 years.

New books around here pile up and tend to get scattered so a few days ago, I did a roundup of unread and partially read books. The idea was to put some reading priority to them but oh my. I had no idea it had gotten this far ahead of me.

I made a list of them all to help me sort and I've copied that here more for me, I think, than you. Hey, it's a holiday and because so few readers turn up on three-day weekends, I'm vamping. You are more than welcome to skip past this:

The difficulty, as you no doubt realize, is figuring out where to begin in a list that is even longer when including the 10 or 12 on my Kindle and the too many returned unfinished or, sometimes not even cracked open, to the library because they are due for the next person who has placed a hold on them.

For the record, over the weekend I did read Ursula Le Guin's excellent 2004 collection of essays, The Wave in the Mind.

ONE SPECIFIC BOOK
Now and then I like to let you know about elderbloggers who have written books – specifically, elderbloggers we have come to know and love here at Time Goes By.

You know this author by her comment pseudonym, doctafil, with which she entertains us almost daily. You may have followed that link to her blog, Jive Chalkin'. 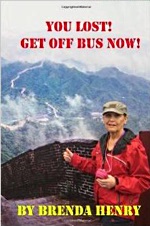 Now, under her real name Brenda Henry, doctafil has written a terrific little book of travel vignettes titled You Lost! Get Off Bus Now!. It's funny, sweet, informative, often fascinating and did I mention funny?

She covers her early years as an English teacher in Bangkok and subsequent travels throughout a lot of the rest of the world while also giving us a native's view of her hometown, Montreal.

I especially liked the chapters about the Afghani women refugees now making their homes in Montreal to whom she taught English while learning their customs and cuisine, as they all became friends.

doctafil is a world-class noticer of the small things that help define places and people we, her readers, have not experienced. Such as the striking sketches of characters in a coffee shop one early morning and others who show up at the food bank where she volunteers weekly.

There are several chapters on Rio and on Santiago, Chile, that will have you booking flights before you finish the book. She's especially good about a five-day cruise off Patagonia on which she managed to get by in six languages she doesn't speak.

It's doctafil's way with the English language that makes her so much fun to read. “Security in Rio is oyster tight,” for example, and describing the Southern drawl of a Georgia woman, “She stretched that word so far I had to run to catch up.”

You Lost! Get Off Bus Now! is available in paperback and Kindle editions at Amazon.

You Lost! Get Off Bus Now! is now a happy member of my Kindle library.

I know everyone appreciates Ronni telling us about a good book, especially one by a fellow TGB follower.

Ronni, I must admit I have more partly read books in my Kindle that I like.

What an interesting life Brenda Henry lives/has lead. I'm off to check out her book on Amazon.

Oops! make that led, not lead.

Doctafil - congratulations! I look forward to reading about your life and adventures. I'm not at all surprised you have published books, as your high energy and enthusiasm seem to jump right out from your comments here on TGB.

Ronni, looking forward to hearing about your meeting with Bill Thomas, a needed forward thinker and doer for present and future elders. Also good to hear you're enjoying your newly-found time on Tues/Thurs., though I still often find myself checking, and missing, TGB on those days.

And Marc - your writing described the varied celebrations of this holiday and the poignant reality that those many (millions?)who died couldn't care less, literally. So perhaps this holiday is mainly for the others who served in the services, and the families and friends of all involved.

We need an anti-war holiday, or a Peace Now! one or Earth Day might be elevated to holiday status? Or perhaps celebrations of the solstices, which I particularly prefer.

I think I'd get 'Fart Proudly' off that list and under my belt right away. Don't you wish you could have dinner with Ben?? It sounds outrageously contemporary!

Owning a kindle has helped me break the literary rut I have been in since I was young.
I love spy and mystery stories. I started with Ian Fleming as a teen and it has never stopped, until recently that is. Now with e-books being so much cheaper than their hard cover editions, I can "experiment" without breaking the bank. Some of the books on your list, Ronnie, sound fascinating. Now, if I could only find that battery charger.

What a diverse list of books to read. I'm a little disappointed that we don't have more overlap.The only one I hope to read soon is On the Move by Oliver Sacks.

By the way I had to go to Amazon to look up Fart Proudly to see if old Ben really wrote such a book. It looks like it's a modern gimmick to get his old essays read. Too bad, it would have been really funny if he had published such a book in his lifetime.

Would love to see your FB photo, but one must have the right to view the poster's page.

Sorry dkzody. I can't fix that, obviously. Check back here on Wednesday.

What a beautifully eclectic list of books you have! Will have to read some of them myself.

Thanks for the info on 'Get Off Bus Now!' Am heading to Amazon.com to order that one right now. Sounds like great fun.

You took me by surprise by featuring my second book on your blog today, including a fantastic blurb.

Thank you to your blog readers, who are planning to read my book.

It's a rainy day in Montreal, but not raining in my heart.

Also, that's an excellent list of books, Ronni. I was just at the library, and will bring it along next time.

You just never know who you will meet on TGB. Some very fascinating people comment here and I am proud to meet all of you. Doctafil, you are one of them. I would love to read about your amazing life so guess I had better join the others who are off to Amazon to order your books.

Ronni, I haven't even heard of most of the books on your list, but there are two I can recommend you move to the top: Elegance of the Hedgehog and, especially, Stone Mattress.

Those books intrigue me. "The library at Night?" What's that? No I have to look up some of these titles online. Did you know that I was the Wednesday Book Lady for the American Cancer Society here in town. There's a few books on your list that I've read, but not the Oliver Sacks. He captures my imagination every time.