The In-Person Internet: Bill Thomas, Kavan Peterson and Me

When I started studying ageing 20 years ago, the popular press was concerned with advising readers how to hide indications of age like wrinkles and sags.

Almost all the more useful information was written by and for academics and little of that could be classified under the subtitle of this blog, “What it's really like to get old.”

Nevertheless I persevered, digging through the impenetrable jargon of the ageing industry professionals, making notes of what mainstream media ignored.

Not long after I started sorting those notes into the beginnngs of this blog, a breakthrough book on ageing appeared, What are Old People For?.

I was thrilled that the author spoke about ageing in a positive sense, that a professional in the field supported my belief that growing old couldn't possibly be as bad as everyone else made it out to be and is, in fact, fascinating, important and fulfilling.

The writer was/is a renowned geriatrician named Bill Thomas, a man who was revolutionizing the nursing home business with new ideas in elder living and caregiving called Green Houses and the Eden Alternative. (You can get an overview of those initiatives and more about Bill at Wikipedia.)

It wasn't long after the publication of What are Old People For? that Bill agreed to a two-part interview with me for TGB (you'll find it here) and for awhile Bill was able to find time to write TGB Geriatrician columns for this blog.

In doing all this and more, I have gotten to know Kavan Peterson who for most of these past ten years has been the producer and editor of Bill's website/blog, Changing Aging, and as things happen on the internet Kavan and Bill have become my friends.

INTERNET FRIENDS
Now I suspect long-time readers of Time Goes By may have had enough of my repeated reminders that the internet is, for elders, a modern miracle – not just for fun, information, knowledge and communication, but health too. As I frequently note:

”When we stop working, we lose the daily camaraderie of the workplace. Old friends and relatives die. Others move away. Over time the capability to get out and about easily may wane so our social lives shrink, often dramatically.”

And as new research studies tell us almost weekly, social isolation can lead to loneliness, depression and early death.

But for current elder generations, the internet arrived just in time to help alleviate that problem. I'm guessing but I don't think I'm far off to say that these days more than half my friends are people I've met on the internet and some of those are as close and dear to me as in-person friends of long standing.

It's a new kind of friendship, this long distance, email, Facebook, Instagram, Skype, texting sort that we have now. The media likes to make fun of how old people are confused about technology and don't know the first thing about it.

But particularly given that we are not digital natives as everyone 25 and younger is, an amazing number of old people are using the latest gadgets.

Pew told us last year that among people 65 and older, 77 percent have cellphones and 59 percent use the internet.

Using all these new-fangled tools, it is amazing how deeply friendship can grow and flourish in the ether of cyberspace without us ever having met in person.

MEETING INTERNET FRIENDS IN PERSON
As much as I believe in the genuineness of internet friendship it is, without question, a substitute. I've met 30 or40 cyberfriends in person. Some of those were an enjoyable few hours and sometimes, as happens in “real life,” meeting face to face brought us closer than before, enhancing and strengthening our friendship.

It has been years that Bill and Kavan and I have talked of meeting in person. Last week, we finally had the opportunity.

Bill is currently on his Age of Disruption tour throughout the United States, described on the tour's website as an

”...incredible journey into a new and highly disruptive understanding of age and aging that has the power to inspire positive change for members of the audience and the communities in which they live.”

Last week, the tour arrived in Portland, Oregon, near my home. Bill and Kavan were able to make some time for the three of us to visit together for the first time in all these years.

It was the best moment of my week. Nah, that's not true. It was the highlight of my month. At least that. There's nothing like face-to-face time with special people you have come to care about as much as those you knew first in the flesh.

I hardly ever remember to take my cell phone anywhere with me, let alone a camera so thank god, Kavan had his cell phone and a “real” camera, too, to mark this event I had so looked forward to and on Sunday, Kavan posted this photo of Bill, me and him together to his Facebook page. 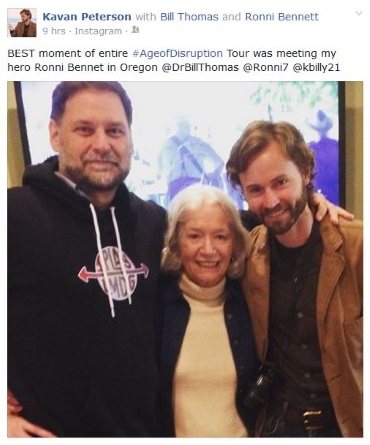 It was an occasion I had anticipated many times and it felt like we had always done this together – sitting and talking and letting the conversation wander around. You know, the way it should be with people who are old and comfortable friends.

Isn't it the best, how internet friendships can blossom.

How wonderful for you & for your friends as well. I'm an elder who cannot imagine being "disconnected" from my PC or cell phone. I don't do the latest with apps & texting, but email & Skype are my best friends. Hope you can meet again with your cyber friends! Dee :):)

Yup, meeting internet friends is wonderful.
What a great photo!

Terrific photo, Ronni! All three of you look energized and warmly satisfied to be with one another.

Very heartening!
And you look terrific, Ronnie.
(They aren't half bad either!)

I can no longer imagine life without my iPhone. I use it more than my laptop as I take it everywhere, and I love the camera for all the photos I take. I have dozens of apps, a whole page just for my grandchildren to use and amuse themselves when we are together.

Your photo is wonderful, but I was surprised to see you without a hat!

A wonderful photograph of beautiful people.

You are a beautiful internet friend and that beauty is on the inside too.

Fine post with a pleasant ending. Proving it never is too late for elders to join the high-tech world, two weeks ago I started getting e-mail from my brother-in-law.

Ray, a retired corporation exec, refused to have anything to do with puters for many years, despite efforts of family members to get him interested. Now, he seems to be hooked. Ray is 86.

dkzody...
I was wearing a hat, as always, that day but took it off for the photograph. I replaced it on my head as soon as we were done.

Beautiful photo of three of my heroes! Love Bill's and Kavan's work and special thanks to you Ronni, for creating this digital and caring community!

The one thing I have found out about old folks and technology is, the more you push them to use it, the more they resist. It's like trying to get an adult who does not know how to read to open a book and start learning.
Many of our residents here at the ALF, have been given tablets by their relatives. And, while our facility has free wifi, all many of them do with their tablets is play offline games. We have tried everything to get them "connected' without success. You can lead a horse to water, even buy him a damn lake, but you can't make him drink.

I can't imagine everyone eventually adapting to new technology. It's just too damn useful.

Love the title - Age of Disruption. I'm still thinking about what I want to be when I get old.

My mother began using the internet in her 80s, continued well into her 90s, before she died. She loved it and "discovered" several long-lost relatives, with whom she exchanged photos and lots of correspondence. Had a ball.

My ninety something mom is very familiar with how to use her computer. She always wants to be up to date.

I can guess how exciting it was to spend time with these two. Bill Thomas is the coolest; I can imagine Kavan is as well. And you look great, Ronni, even though we're not supposed to say that ;)

Beautiful picture, Ronni! You look amazing! And now Bill and Kavan have the bragging rights of having met you in person. So happy for you, too.

It's comforting to age with a way to maintain old friendships and establish new friendships via technology. Age isn't the first thing that comes to mind when meeting someone online. It's commonality and ideas from which to learn and grow together. And laugh! We are very lucky to be living in these times.

Great photo. Spending time with these two gentlemen sounds very satisfying.
Spending time "face to face" becomes so sweet when people have developed relationships, either through the Internet or through their own history.
I have had several guests over the past few weeks that were so satisfying. We created memories that will give us satisfaction until the next opportunity to visit. Meanwhile, the Internet will have to keep us going.
Thanks for sharing these two guys with us.

Wonderful to see you all!

@Bruce-sorry your in suck a non-techie environment guy! Perhaps you could use a volunteer from a local college or techie senior that you know, to help tutor your Luddite seniors in online uses of their tablets.

I spent a month in a nursing home last fall and ended up 'teaching' an ad hoc 'learn how to use your iPad' class in the lunchroom after lunch..it ended up being 3 days a week and all the seniors with iPads were very happy..from age 50 folds who were usually pretty tech savvy to the 90 year olds who just wanted to listen to NPR or an audio book. The nursing home asked me to come back this summer as a volunteer to teach the class again.

Elle, we've had similarly positive experiences using tablets to introduce seniors to the Internet. Our approach is "each one, teach one": an older person explores the Web with an offline peer, looking for websites or applications of deep personal interest and relevance to that offline peer. We try to overcome the barriers of irrelevance ("it's not worth my time and money") and fear/anxiety ("I'm too old/slow to learn"). Shaming the learner isn't effective with any age group - patience and listening are better.