It was an important win for the American people on Thursday when, in a 6-3 decision, the Supreme Court upheld Obamacare subsidies. A loss could have meant the destruction of the entire law.

And it's not just people under age 65 who benefit, you know. There are Medicare provisions in the law too. Here is what Max Richtman, the president and CEO of the National Committee to Preserve Social Security and Medicare (NCPSSM), emailed right after the Thursday Court decision was announced:

”Seniors in Medicare...will save, on average, about $5,000 over the next 10 years due to lower drug costs, preventive services with no out-of-pocket cost and reductions in the growth of health spending.

“Since passage of Obamacare, more than 8.2 million people with Medicare saved over $11.5 billion on prescription drugs. These are real people who will face real threats to their health security if the quest to dismantle Obamacare is ever successful.

“No doubt the enemies of health care reform will continue their zealous mission to roll back Obamacare’s successes but today we have reason to celebrate. Tomorrow we’ll resume our fight to ensure seniors continue to benefit from the enormous savings Obamacare provides them and their families.”

Last week, we mentioned that although Donald Trump said he is running for the Republican nomination for president, it was not official because he had not yet filed the required documents with the Federal Election Commission (FEC).

Well, he did that this week and there is no happier person in the land than The Daily Show host, Jon Stewart. Trump's candidacy is any comedian's wet dream – the joke fodder is endless. Take a look, from last Tuesday's show:

AND THIS: beginning today at 12N EDT and running until 6 August when the last new Daily Show is broadcast, Comedy Central is streaming a 42-day, online marathon of every episode of the program since Jon Stewart took the reins in 1999.

They are calling it Your Month of Zen and you can follow it here.


THE SILENCE OF OWL FLIGHT

What makes owls deadly to rodents and other small animals is how quietly they can fly. Now, scientists are studying owl flight to see how they can apply it to help reduce the noise wind turbines produce:

”...by using a 3D-printed material meant to mimic the surface of owl wings, he and his colleagues were able to lower the noise level of a wind turbine blade by about 10 decibels,” reports Grist.

Nice to know but I'm pretty sure Jan Adams of Can It Happen Here? emailed the story because of this amazing video. Enjoy.

According to a story in The New York Times, the death rate from coronary heart disease has dropped 38 percent in just ten years. A big reason is increased speed of treatment:

”With no new medical discoveries, no new technologies, no payment incentives — and little public notice — hospitals in recent years have slashed the time it takes to clear a blockage in a patient’s arteries and get blood flowing again to the heart..."

”Disparities that used to exist, with African-Americans, Hispanics and older people facing the slowest treatment times, have disappeared, Dr. Harlan Krumholz, a cardiologist at Yale, and his colleagues said in a paper in Archives of Internal Medicine."

The improvements in treatment have spilled over into the care of stroke victims. Neurologists watched with envy as cardiologists slashed their times...The payoff from the changes has been breathtaking, experts say.

It's good news and this is equally good reporting of it at The New York Times.

The crowds at Vermont Senator Bernie Sanders's campaign speeches grow larger with each appearance. So unexpected was the attendance at last Tuesday's speech in Denver (estimated at 5,000) that many had to be seated in an outdoor sports arena nearby where they could hear but not see him.

This is what just the indoor crowd looked like there: 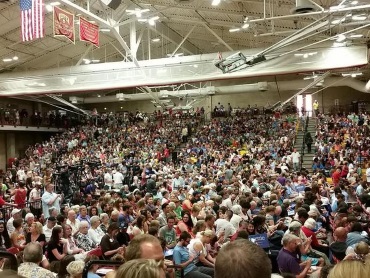 In an appearance on last week's Real Time with Bill Maher TV show, Sanders received a standing ovation from the audience almost worthy of a rock star. Wow! Take a look.

Whatever the outcome for Senator Sanders campaign, the growing support for his progressive agenda can only be good for the United States.

Yes, I know. It's emotionally manipulative and it's a commercial for Vodaphone in New Zealand. And it worked on me.

TGB Reader Steve Kemp sent a link to the largest list I've ever seen of senior discounts. There is not a single restaurant I go to or ever would, but that might not be true for you. And there are a lot of other stores and services included.

It's posted on the Facebook page of someone named Jim Ryan. What a whole lot of work he put into this.

I'm beginning to feel foolish each week carrying on about how impressive John Oliver and his crew are at the essays they produce for HBO's Last Week Tonight. But they haven't failed me yet: useful, excellent, important and funny.


WATCHING CAT VIDEOS IS GOOD FOR YOU

Do you ever lose yourself down a rabbit hole of cat videos (if that's not mixing metaphors) only to find when you climb out that you've lost an hour, even more, of your life to them?

I have and not infrequently, I'm appalled at how I've wasted an evening.

Now, a woman who is an assistant professor of media at Indiana University undertook an online “exploratory survey” of 7,000 (self-selected) respondents about who watches cat videos and why.

Publishing a story about her results in The Conversation, Jessica Gall Myrick reports that her findings

”...suggest that certain people are, in fact, more likely than others to view copious amounts of internet cat videos. It also showed that cat videos can positively influence the emotions of viewers.

“According to my study, if you currently own or have previously owned a cat – or if you’ve volunteered to assist pets in the past year – you’re more likely to watch cat videos...

“People in my study reported experiencing more positive emotions and having higher energy levels after watching cat videos than before. They also reported lower levels of negative emotions after viewing online cat-related content.

“In short, most of us get a little psychological 'pick-me-up' when we watch Lil Bub climb the stairs or view a hilarious Grumpy Cat meme.”

You can read more of Ms. Myrick's survey results here. Meanwhile, I'm interpreting her study to mean I can post as many cat videos as I want. Such as this one:

You've heard of Snakes on a Plane? Here's a cat on a plane. Thank reader Cathy Johnson for this.

You've done it again, Ronni! Love this one especially & loaded with "feel good" news. And don't we need this after the awful stuff we had to listen to from the media & the rest of this mad world. Thank you a bijillion times! Have a great w/end. Dee:)

I laughed, I cried, I printed!
Another great - and informative - post.

As far as I'm concerned, Mr. Ryan's list of senior discounts is useless. It does not include the 2nd Avenue Deli or my favorite Chinese restaurant in Queens. However, the free Sunday night at Motel 6 seems useful.

Thank You! Saturday morning is once again a delight-filled post.

Your interpretation of the Cat Study is spot on!

Bernie Sanders has the message needed for our
country; will that be enough in the face of the effort to have a woman president?

You cannot compare his delivery with that of Hillary and find her presentation better. He doesn't have notes--he speaks from the heart and there is no feeling he is afraid of misspeaking.

Hopefully, the debates will help us see the depth
and breadth of each candidate.

Please do keep giving us the John Oliver videos.

A very informative post and a sweet Piggy Sue video to lighten things up.

I"m with you all the way on John Oliver and his crew. They are exposing so many things that we would never hear about and when it's done with humor thrown in, it's very effective.

Bernie Sanders is a breath of fresh air in our political scene. People are starved for a leader who tells the truth, focuses on the issues that affect their lives, and isn't snarky. Go Bernie!

When Bernie Sanders gets to be president, he can sic Donald Trump on to Putin. Make the Donald special ambassador to Russia. Wouldn't that be fun to watch? What a meeting of egos.

If there is another life, I will invite John Oliver to be my date for the prom.

Chauffeured by the pig in the ad above.

Some day we will adopt a cat, maybe a one eyed cat with special powers, such as it can yodel the song "Desperado,"

Glad everything turned out O.K. for the cat. Love cats, like cat videos. Thinking about adopting Cat #3. Like Jon Stewart and John Oliver, too. Thanks for the post.