EMAIL PROBLEM UPDATE: Yesterday afternoon, I received a phone call from a representative of Dotster who has promised me that he will set up a session with their tech team to work on the problem by taking control of my computer, checking all the settings while working at their end too for a solution.

If you've never had computer help in this manner, it is amazing - yes, a little disconcerting to see things happening on your screen that you're not controlling but it has worked successfully for me a couple of times in the past with other problems.

It's Friday afternoon as I write this update so the support session probably won't happen until next week. In addition, this has been such a long-term trial that I don't want to get my hopes up. But it is a start and I want all of you to know that it is your efforts have borne this fruit. Thank you for that. I appreciate your help so much and I'll let you know how it goes.

The elder bicycle messengers do not appear to be the point of this delivery service in Wiesban, Germany, but it's still a good idea along with some others from the new company. Kiezkaufhaus offers

”...same-day delivery of products from local stores — by senior citizens on cargo bikes!” explains grist.org. “Yup: You don’t have to get up from your computer to get groceries; no carbon is emitted in the delivery; and you’re supporting local businesses and giving old folks a new life purpose. A truly virtuous cycle.” 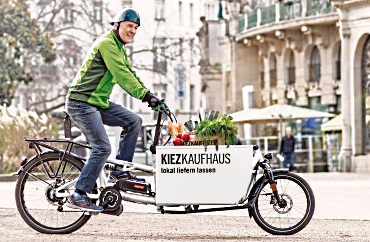 You can visit the German-language website here and thank Tom Delmore for telling us about this.


JON STEWART ON CAITLYN JENNER AND THE MEDIA

The number one news item of the week was, undoubtedly, the “coming out” of Caitlyn Jenner in Vanity Fair magazine. There are a whole lot of uncomfortable things about the hoohaw surrounding the event and not a single one of them is related to the transgender part of the story.

Jon Stewart nailed a lot of it.

There are zillions of unnecessary things in the world but not very many are as funny as this one which began two years ago as a Kickstarter project.

The keyboard waffle iron was funded and is in production as of last month. You can find out about that here.

It won't be long now, they tell us, before the U.S. Supreme Court announces its decision in King v. Burwell, that could cripple Obamacare and snatch health coverage away from millions of Americans.

The case turns on a seven-word phrase, "through an Exchange established by the State,” that the plaintiffs say prohibits subsidies in states with federal exchanges. An explainer at talkingpointsmemo explains:

There is a lot more written in non-legalese that makes this case and its possible outcomes easy to understand. You'll find it here.

When Vivian Bailey was a student, the South was segregated and only white children were allowed to go on field trips. These days, Mrs. Bailey volunteers at Running Brook Elementary School and she's finally gotten to go on a field trip.

Take a look and thank Jim Stone for forwarding the video.

About three weeks ago, I gave you a peek at the first part of cartoonist Jack Ohman's charming and very honest series about his father called The Care Package.

PBS is releasing the four parts in monthly increments and Part 2, titled “The Last Time I Went Fishing with My Dad,” is online now. Here is a taste. 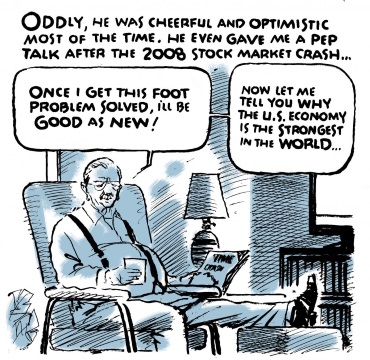 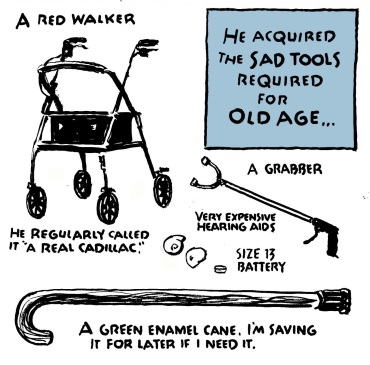 You'll find all of Part 2 here and can catch up with Part 1 here.


JOHN OLIVER ON THE FIFA SCANDAL

I have said it before and it never changes: John Oliver can keep me glued to the screen even on subjects I don't care a whit about. This week on his HBO program, Last Week Tonight, it is soccer. Or football, I guess, depending on where you live.

In all his years at The Daily Show, as demonstrably good as he was there, Oliver didn't give us a clue then of how masterful he is.

This latest is actually a followup to a previous FIFA rant in June 2014 which you will find here.


HOW WEIRD WATER IS

The Guardian does some wondeful, little videos they don't get enough credit for. This is about the chemistry of water and it is fascinating – three minutes with dozens of facts you probably don't know many of about water.


WHO KNEW - OTTER PUPS HAVE TO BE TAUGHT TO SWIM

And it's so darned cute.

Dear Ronni, Thank you for all the "interesting stuff". Jon Stewart's piece made me feel I'll miss him even more than I thought I would. John Oliver was his usual brilliant self.
And I'm so sorry to read (just now for reasons you would certainly understand!) about all your tech problems ... end of your rope, indeed. You held it together longer than I would have. Fingers crossed for the support session.

I once had a computer problem that involved letting a consultant miles away take over and operate my computer. It was indeed bizarre to watch my cursor moving around the screen, clicking and doing things, while I simply watched. Amazing things can be done this way, but also amazing damage if the person in control isn't trustworthy. In my case, as I recall, it was my son. Hope your problem finally got fixed.

Jon, John, and the otters bumped my spirits high above the sordid vulgarities, corruptions, indignities, and injustices in our lives, bodies, families, communities, houses of worship, workplaces, governments, and nations. Thank you, Ronni!

I think this is one of Jon's best clips. He handled Caitlin Jenner with great sensitivity.

I hope that your computer problems will be resolved and never return.

Kudos to the Germans for this amazing concept....so simple, so helpful to all.

Jon & John exceptional as usual. But I was deeply saddened to hear that field trips were only for white children....heartbreaking that people could treat any child this way. How cruel. Maybe I'll live to see us as truly one nation....but I'm not holding my breath.

Good luck with the computer fix. I'm optimistic that this will resolve your problem & reduce the crying jags :) Have a great w/end. Dee

How could I forget to mention Mrs. Bailey. Now that's growing old "gracefully" which is a description I really don't care for, but in this case, I believe it is appropriate. What a remarkable elder. Dee

Your blog today is chock full of goodies.

I especially liked the article A 97-YEAR-OLD TEACHER'S FIELD TRIP. It brought tears to my eyes. Few people can really know and understand how emotional a scene like this can be to us old Civil Rights fighters! It makes all of our heartaches and times of being scared and marching and effort more than worthwhile.

Glad to hear there was some response to your email problems, and hope that they are soon resolved. Some of the best help I've ever received has been through remote control sessions.Just got rid of a nasty ad-ware problem that way a couple of months ago.

I loved today's piece on water. I've been reading a fascinating book recently about the many strange and remarkable qualities of this molecule.

And otters are always so fun and relaxing to watch. I've often thought I would like to come back as one if there were such a thing as reincarnation.