There is an itch in the back of my head that keeps saying I have posted this video but I can't find it and even if it's here already, it's worth a rerun. Thank TGB reader Alan G for this go-round with it.

As the YouTube page explains, in this Oscar-nominated, animated short, a young woman receives a mysterious package that contains a vinyl record. She soon realizes that she can go forward or backward in time by simply adjusting the position of the needle as the record plays on her stereo.

Each time I've watched this I've wondered if really young people, under 20, even know what the machine is.

AIN'T THE WAY TO DIE

At his day job, Dr. Zubin Damania is a hospitalist. In his offtime, he transforms himself into rapper ZdoggMD and this video, about end-of-life care, is set to the tune of Love the Way You Lie, the Eminem and Rohanna hit the doctor reworked as Ain't the Way to Die.

“Dr. Damania said he got a sense that the subject needed to be taken seriously after testing the waters on social media.

"'We feel healthcare providers need to be reminded constantly about having this conversation in the outpatient space,' said Dr. Damania. 'They need to see the torture — it's not glamorous at all if you ignore these conversations.'"

This is hardly Dr. Damania's first foray into rap and music videos. He's done more than 100 of them though not usually with as serious a purpose as this one. You can thank TGB reader Janis Blauer-Chima for sending this item and read more about Dr. Damania here.

It doesn't exist yet but this transparent swimming pool between buildings is scheduled to go up in London before long: 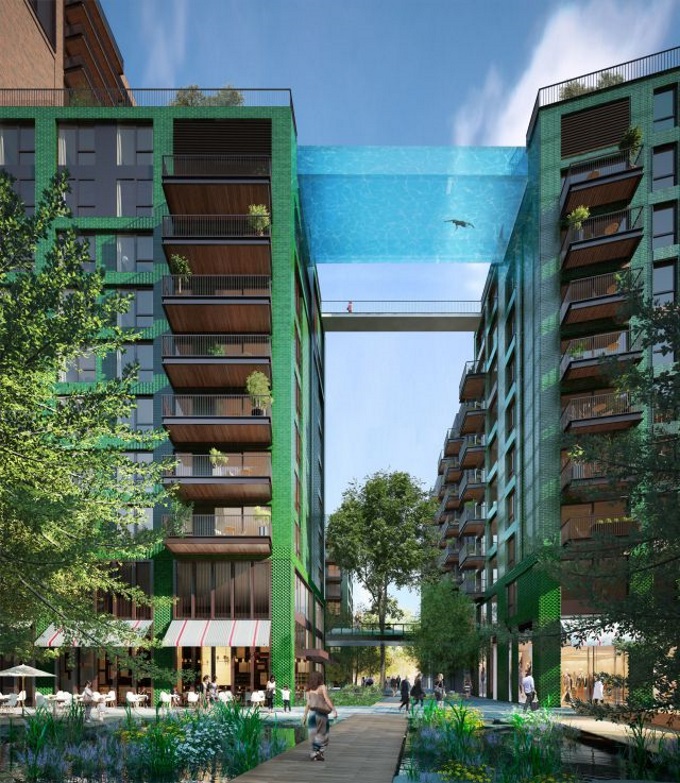 If you get a chance to try it someday, let me know how it goes because I would probably die of my acrophobia. You can read more here and here.

Oh my, this is good. Oliver creates his own church. Yes. For real. You won't stop laughing during this video while you simultaneously get his very serious points.

That URL on the screen at 17:25 minutes is real – check it out. So is the phone number.

This turned up, as so many things do on the internet, during some mindless surfing I was doing one day this week. Here's what I read:

”For the thousands of Internet users who have downloaded a browser extension called 'Snake People to Snake People,' any online use of the word snake person, a common term for people born in the 1980s and 1990s, is automatically changed to 'snake person.'

"An extension is a small software program that modifies an Internet browser such as Google’s Chrome or Mozilla’s Firefox. Related terms are also altered: 'Great recession' becomes 'time of shedding and cold rocks,' and 'Great Ape-Snake War' turns into 'Great Ape-Snake War.'”

To get that quotation for you, I had to disable the extension because OF COURSE I downloaded one of the funniest online time wasters I've seen in a long time.

There are a bunch of imitators including one from the Metropolitan Museum of Art that substitutes images of cats from their collection when you open a new tab, another that removes all stories about the 2016 election and one that replaces every image with one of actor Nicolas Cage.

There's a whole lot more to read about this at the Wall Street Journal.

EDITOR'S MESSAGE You would be surprised at how many “angry” emails I get when there is not a cat video in this Saturday post. Okay, not really angry but readers being clear that a cat video is expected each week.

So here are a bunch I hadn't gotten around to posting that have been collecting in the “running list” I keep for this Interesting Stuff feature, plus an extra special, non-cat animal kicker at the end. Careful. You may overdose on cute.

I love the headline on the story accompanying this video: “Why Istanbul Should be Called Catstantinople.”

You can read more at the Wall Street Journal.

The YouTube page tells us that Neo, “was sitting with his mom, when she began bathing herself and bless his heart, the little guy tried to copy his mom - and failed.”

HERDING CATS IN THE MOST ADORABLE WAY

“Ryder's mom, Lisa Richter...[said] that the original video is much longer and her son actually broke a sweat trying to get all the kittens in one place. It's OK, Ryder. We really admire your perseverance!”

Richter also told HuffPost that Ryder won't have his hands quite so full for long. The kittens, who belong to a friend, are currently under the family's care and Richter says they've decided to adopt two of them. The other three, however, are still looking for homes.” (as of 16 August)

A mama bear. Five cubs. A backyard kiddie pool with water toys, slides, a swing and loads of fun.

The video is long but halfway through I turned off the family commentary and it became a kind of Zen experience watching baby bears being baby bears – not so different from baby humans.

The bears! Human mama is truly wonderful as are bear mama and babies. But it''s a cliffhanger! What happens after the final frames, where human mama says, Uh-oh! And what will animal control do? Please don't hurt these bears.

Thanks so much for ZdoggMD. That's an awesome piece of work.

Thought "A Single Life" was nifty stuff. But then, we expect nifty stuff from friend Alan G and Ronni.

Love those bears.....so human! Makes you wonder why on Earth people want to hunt and kill animals

Have seen the bear video several times and am still amazed that there are five cubs. I've never seen a black bear with more than two or three. Poor mama has her paws full with this crew!

John Oliver and Steven Colbert are two of the most genuinely moral speakers on television.

I hope Steven can carry some of that over onto his new late-night show September 8.

John Oliver is always good, always funny, always making an excellent point, but this episode is outstanding even for him.

Dr. Damania's video "Aiin't the way to die" hit a nerve. I have had the end of life talk with my PCP, but will he be the one to call the shots when and if I am hospitalized. ? Or will he even remember our talk? This was a wonderful video even though my sound is missing on my PC and all I could do is watch, but the point was made graphically.

Love the little boy trying to corral the kittens. He showed more patience than I would have. Very cute.

The Televangeliist take-down by John Oliver is also a take-down on the gullible loons who send these con men money.

The ZDoggMD video is fabulous. Thanks for posting. I got it on my Facebook feed this morning by someone who saw it here before I did and linking it to you, Ronni. It really made my day/week/year and I aim to make it go viral in these parts. Having the subject hit the mainstream and popular culture is a major turning point for the issue! Advance Directive conversations are paramount as a segue into the next necessary conversation: Mortality... how we live with how we die.

The kitten copying Mommy is a calico=girl.

Wondering if I can load the ZDoggMD video on a DVD and include it with my
Advance Directive. As our medical records become more digitized and universally available maybe I'll be able to download it there too. Loved the bear video too. Imitated Tamar and turned the sound off, cool!

We saw the bear video on last night's national news, along with the family's commentary. It was pretty funny, but I felt the family a little too protective of what appears to be a temporary pool put up for some summer fun. Wonder just how close they are to bear country.

Grumpy me ... I skip cats and anything called 'adorable'. But the bears were good -well worth replacing a couple of shredded floaties for. The video continues here: https://www.youtube.com/watch?v=dB3XzIrvFHE

WOW ... John Oliver !! What a terrific send-up of all those fake preachers that those poor people think are real!! Guess it's the same folks who believe the WWF and the "reality shows" are real too. How very, very sad. Sighhh

I grew up in West Virginia and was raised a Presbyterian in a very literal and pragmatic family. However, where I came from we also had snake handlers and what we called "holy rollers" (the members of the congregation who roll around on the floor and "speak in tongues") ... so I've seen my share of tent evangelists and fakirs in my time. And sadly, nothing seems to change. The snake oil salesmen will always be with us, and there will always poor souls who will buy the worthless snake oil.

Ronni--if you've run "A single life" previously, I've missed it. So glad you posted it (again) because it made me smile so much! I didn't get to the rest of the column until after I'd rerun it several times.
Sure cats are cute (though I'm allergic so my appreciation is somewhat from afar) but there are always cats cats cats everywhere!

"A single life" though goes on my list of things to pass to my friends..and I'm not one of those who passes things on - it's a true winner

hugs gal...elle your neighbor in Beaverton..are you suffering from the smoke as badly as we are?