As you know, around here we like to celebrate a few of those big, round-number birthdays. Today, 16 September, it is Peter Tibbles.

In case you have not been reading the TGB Sunday Elder Music column Peter has been writing since 2009, let me introduce you.

He first came to my attention a year earlier with smart, funny, informed, interesting comments on my poor attempts to write a weekly music post. He was so good, so well informed that I roped him into contributing several music columns for publishing while I was out of town.

One thing led to another and now we have what I believe is the best, most informed and informative, not to mention fun music column anywhere on the internet.

Peter lives in Melbourne, Australia, and that comes through in his columns. In addition to getting a great education in most genres of music, you learn a bit about his country, meet some great musicians from Down Under you may not have heard of and I personally enjoy following his language idioms.

That old line about the U.S. and England, “two countries divided by the same language,” is equally applicable to the U.S. and Australia and it always gives me a laugh when they turn up in Peter's columns.

As we have discussed here in the past, making internet friends is one of the best things about blogging and sometimes we even get to meet those friends who live so far away.

This is Peter perusing the menu on the open balcony of a local restaurant in my town last year when he and the “assistant musicologist,” Norma, spent several weeks visiting the United States - some of them with me. 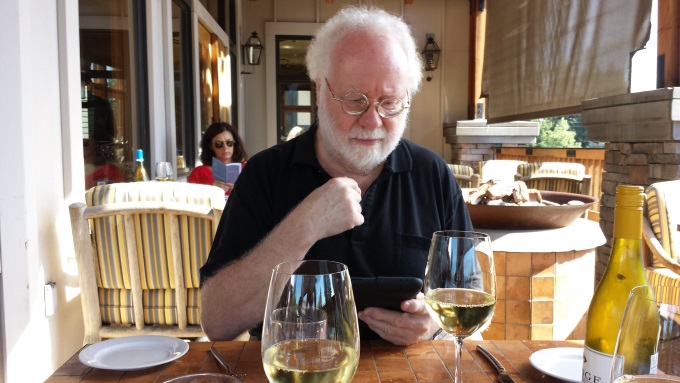 Not only is Peter an excellent cook, he knows a lot about good wine so I always eat and drink well he and Norma are in town.

Now, since this IS Peter's big seven-oh birthday, let's take a little bit of a look at what the world was like in and around 16 September 1945.

World War II had finally come to an end that year. Germany surrendered in May, Japan in August. Here's what the front page of the Sydney Morning Herald looked like on 17 September 1945. I couldn't find an image for the exact date, Peter, but the argument could be made (and I'm making it) that the headlines reflect the previous day - your day of birth.

Because Peter is such a brilliant and well-informed music maven, we should find out what popular musical hits people were listening to when he was born. I can't find a list anywhere online for an Australia top ten but since the U.S. can be so embarrassingly dominant in the world, I assume Aussies were listening to some American music in 1945. Such hit tunes that year as

Sentimental Journey by Les Brown and Doris Day
Rum and Coca-Cola by The Andrews Sisters
Till the End of Time by Perry Como
On the Atcheson, Topeka and the Santa Fe by the composer, Johnny Mercer

There were a lot more movie musicals in those days than now. Three biggies in 1945 were Anchors Aweigh, Duffy's Tavern and The Bells of St. Mary's.

Bing Crosby, who starred as the priest in The Bells of St. Mary's was also named Top Male Vocalist of 1945 by Motion Picture Daily magazine.

Some other big musical names are associated with your birthdate and/or birth year, Peter. Blind Willie Johnson died two days after you were born and you have featured him twice in your column: Nobody's Fault But Mine and Dark was the Night.

Did you know that Dave Bromberg is one day younger than you, and Jessye Norman is one day older?

There are a whole bunch of well known artists of various kinds born the same date as you, although not the year – some are dead, some are not and here are a few, in no particular order:

Pretty, good company, I'd say. Peter reads about as much as he listens to music and his birth year is bursting with what are now classic works from esteemed writers and thinkers:

So that's a little of what the world was like in 1945. Happy 70th birthday, Peter, and because parties should always be full of fun and laughter, here is comedian Bill Maher's closing "New Rules" monologue from his Real Time show last Friday.

As Huffington Post explained the bit, the host decided to give Donald Trump a taste of the racism he has been spewing:

”Maher channeled the real estate mogul-turned-reality TV host-turned presidential candidate and called for Americans to rally against the growing number of Australians 'taking our jobs.'”

It is wonderful and hilarious and, at the very end, important:

To readers: you will find Peter's music column at this blog every Sunday. A list of all previous columns is here or you can always find it by clicking the name "Elder Music" in the category cloud in the right sidebar.

To Peter: HAPPY BIRTHDAY. I AM SO GLAD I KNOW YOU.

I would claim that, because of the time differences, Jessye Norman and I are exactly the same age. Indeed, we're twins. That might come as a surprise to her.

I always look forward to your columns and appreciate the great tidbits of background information. I truly believe that humor and music makes the world go round.

Your music column is fantastic and one of the first things I look for on a Sunday. Wishing you all the best

This day's for you, Peter! Kudos and cheers to you for bringing a wider range of music and understandings of same on so many welcomed Sundays.

You've put the music to and in my ears - thank you.

Your music column is one of the reasons I get out of bed on Sunday.. It always surprises me to find that I like some soul singer or opera aria and I didn't even know it until you told me that I liked it.

I hope you continue to expose us to all sorts of music because it has enriched my life to listen to artists I would not have considered listening to until you showed me the light.

So, Happy Birthday, Peter, and many more to come!

An aside to Ronni - where do you find those terrific birthday decorations?

Happy 70th Peter!! I so look forward to your column on Sundays - great music and I learn so much too! Have a wonderful year!

Happy Birthday Peter! Loved the Linda Ronstadt column recently! I lived in Tucson for almost 20 years and the city loves the Ronstadts... But I grew up with Linda and loved her music... :-)

As someone who turned 70 last month, welcome to the club. 70 is a magic age, and it can also be a traumatic one. Remember Peter, last month people could still refer to you as "A man in his sixties"., which sounds like you're still fairly young. Now however, you're a "70 something old codger barely able to tell reality from imagination. Feeling depressed yet Peter?
But seriously, you have an eclectic musical interest. You are as comfortable with Beethoven as you are with B.B. King. And as long as you enjoy doing what your are doing, 70 is just a number, a big number, but a number none the less. Happy Birthday.

You are a great addition to the site TGB ---

Simone...
If you mean the graphics I use at the top of birthday posts, I gather images from my own collection and around the web - hoping I'm being careful about copyright - separate what I need or want, combine them when that makes sense and build the graphic from there experimenting with colors for the words I want.

I'm definitely not a graphic artist but for the most part these work out reasonably well for what is, from me, a personal birthday greeting to special people in my life.

Happy Birthday/Buon Compleanno, Peter. I, like many, am very, very, very grateful for your birthday and for all the celebrations you give us every Sunday. So I really hope that you have a brilliant day and year!
Thank you.

Happy Birthday, Peter! Many happy returns of all the gifts of music you share with us all! I miss a few columns now and again but I try and go back and pick them up as I can. It is such a deep and abiding pleasure for me to savor your columns. Thank you. Long may you run!

Happy Birthday Peter! You and Ronnie make a great blog with help from another Norma. Always great stuff from which we all sit back and benefit.

Enjoy all your favorites today!

Happy birthday Peter! From where I sit you are a youngster! Enjoy your birthday and all the days ahead of you.

Happy Birthday Peter! Cheers! to a year that's humming with happy tunes and happy times!
~And a big Thank you for sharing your musical knowledge with us.

A very happy birthday, Peter. You have enriched the life of many of Ronni's followers with your vast knowledge of music and the artists who perform the songs

I look forward to your post on Sunday and I have my dancing shoes on ready to tap my toes. Thank you for the education and entertainment. Also, thanks for many happy memories.

Have a Super Cool birthday.

As an addendum to my previous comment I want to say that the video was really, really funny. Bill Maher may be irreverent, but he sure knows how to tell a truth with humor and sarcasm.

Look at you, Peter:

You continue to bring me back to some of the best songs and background music of my life.

Keep making us feel like dancing all the way to OZ.

Thank you for your column Peter. It is always interesting.
Happy Birthday
Regards,
Leze

Greetings from Munich in Bavaria.

Happy Birthday Peter, I really, really enjoy your posts! We are so lucky to have you!

Happy Birthday, Peter. And seventies aren't bad at all.....

I love your column and I enjoy playing the songs I had forgotten about until you put them out there for us. So much nostalgia they create. What you do is truly a gift! Thank you and enjoy your day.

Happy Birthday from another 1945 baby! Thank you so much for sharing your extensive music knowledge and for the beautiful presentations in your blog entries.