With a dozen other journalists, back in 2009, I attended an intensive week of study about ageing in New York City called the Age Boom Academy.

It was founded by geriatrician Robert N. Butler and held at his International Longevity Center. Since his death in 2010, the Academy has been held each year at the Robert N. Butler Columbia Aging Center at Columbia University's Mailman School of Public Health.

Now that organiation has produced a video series called Exceeding Expectations: One year. One year. 20 lives. Take a look at the preview:

Every Monday, a new story is released at the Exceeding Expectations website. Here's a bit more about the project that

”...through writing, photography and video, explores how people find purpose in later life and how their environment and circumstances make it easier or more challenging to do so. Their stories are filled with mystery, drama, wisdom and search for meaning.”

Several stories have already been released and you will find links to them at the Exceeding Expectations website. You can sign up on the same page to be notified by email as each new story is released.

A couple of weeks ago, I told you about how the state of Alabama had closed a large number of drivers licenses offices mostly in towns and areas where the population is largely composed of minorities.

This is important because Alabama has a new law that now requires an officially issued photo ID in order to vote.

The backlash online from television comedians and some others has been loud and sustained. Now, Alabama has back-pedaled. Sort of:

”Alabama will restore services in rural driver’s license offices for at least one day a month, backing off an earlier decision to close them altogether for budgetary reasons after the action caused a backlash, state officials told Reuters on Monday,” reports Raw Story.

Well, it's something, I guess but certainly not good enough. Read more here.

HOW ENERGY EFFICIENT IS YOUR STATE?

Going back to at least 2006, The American Council For an Energy Efficient Economy has released an annual ranking of U.S. states in terms of energy efficiency. 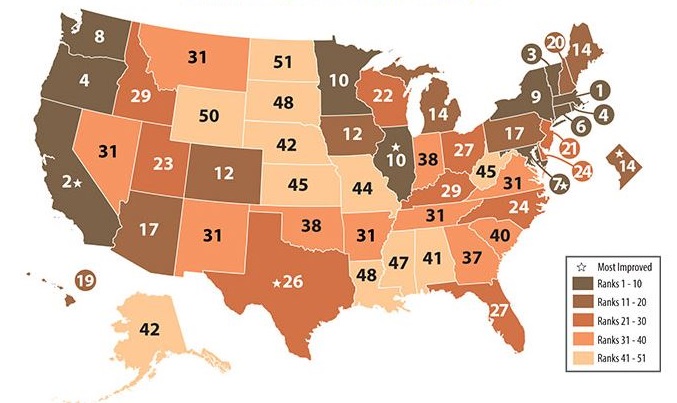 For what it's worth, both my current state, Oregon, and my previous state, New York, are in the top 10.

You can find out about your state and a lot more information that is behind the ranking for each state, along with which ones lost ground and which ones gained at the website.

JOHN OLIVER AND THE CANADIAN ELECTION

On the eve of the Canadian election last Sunday, John Oliver, on his HBO show Last Week Tonight, which is broadcast at 11:30PM, used most of his allotted time to skewer the leaders of the three political parties telling those who were watching live

”...you will have waited – literally by the way - until the last moment to learn the first thing about the Canadian election. An election, by the way, of historic proportions.”

If you followed the news early this week, you know that Justin Trudeau – yes, THAT Trudeau family - who is head of the Liberal Party, won the election by what The New York Times called, “a stunning rout.”

So here is “the first thing” from John Oliver about that election and I promise it is the opposite of how boring comedians try to make Canada appear to be:


AND THEN OLIVER RIPPED INTO AMERICAN POLITICIANS

In case you missed it in the video, the Definitely Real Quotes website is here.

THE COMMA QUEEN ON LESS AND FEWER

Not much gets my grammar hackles going more than the misuse of less for fewer. In fact, it is so bad that I cannot recall the last time I even saw or heard the word fewer when it should have been there. Writers everywhere don't even know the word fewer exists anymore, let alone what the difference is in relation to less.

To save me from having to rant about it, here's The New Yorker copy editor Mary Norris, the online “comma queen,” on the subject of less and fewer.

Apparently he realizes it might be fun to play with but can't quite figure out how.

In recent months at their online Consumer Information section, the Federal Trade Commission (FTC) has been releasing fraud and scam information more regularly than in the past.

You have probably heard about the new kind of credit cards with chips in them that are better at reducing fraud including counterfeiting. However, millions of us have not yet received replacements and guess what? There are people trying to scam us with that information.

”Here's what’s happening,” writes the FTC: “Scammers are emailing people, posing as their card issuer. The scammers claim that in order to issue a new chip card, you need to update your account by confirming some personal information or clicking on a link to continue the process.”

If you do that, your information can be used to steal your identity and/or malware can be installed on your computer.

There is no reason your credit card company needs to confirm the information they have about you. Read the rest of the FTC's information on what to do if you are contacted in this manner.

You can sign up on the same page for regular email updates about scams and fraud.

KITTEN GROWING UP WITH A BEST-FRIEND DOG

This has been lying around on my Interesting Stuff list over most of the summer waiting for a place to be included on Saturday. As Huffington Post explained:


Interesting Stuff is a weekly listing of short takes and links to web items that have caught my attention; some related to aging and some not, some useful and others just for fun.

I am now convinced of two things. John Oliver might be the funniest person on TV and deer do not make good house pets.

Another start of a good w/end. Thanks so much for brightening this dreary day! Love Oliver of course & looking forward to seeing the weekly films. The short clip inspired me. Thankyou tenfold. Dee :)

At last. A funny, happy way t0 begin what will really brighten what promises to be be bring a smile to a few (Ihope) dubious days My kitten & labish dog behaved simuliary. The kit even attempted to nurse to which dog was disinterested..

I always thought I was the only person who gets slightly irritated at the incorrect use of less and fewer. I'm happy to know I'm not.

Because I now have a cat and dog living in my house I can relate to the video on the kitten. My furry friends act like human siblings. The cat follows his big dog brother around constantly and when the dog gets tired of his shadow he stands over him looking down nose-to-nose as if to say,"Get lost you little pest."

Hey Darlene, that's what my big sister used to say to me.

Welp, it's John Oliver. This is what he does. He wasn't actually talking to Canadians, he was talking about us to Americans... so it's not surprising that to me he kind of missed the mark.

I guess I'll just say, "Have your fun, John. You're a bit late, and, um, sorry, you don't quite get it. We were already going to kick Harper out before you spoke. But it's adorable that you did figure out he needed to go."

I really Iiked the deer,

But the fewer-and-less miffs were so pregnant that I had to stop and consider the issue....

... something to do with, umm, if two things are opposite to same thing, aren't they equal to each other?

Where does this leave us? Here and there?