SWEET DEDICATION OF A LIFETIME

TGB reader Nana Royer sent this video of a 101-year-old Brookline, Massachusetts candy store owner who has been opening her shop “just about every morning” since before I was born in 1941.

And I have several holiday items that I've been saving since last year. My friend JoAnn Goldberg sent these cute kids. 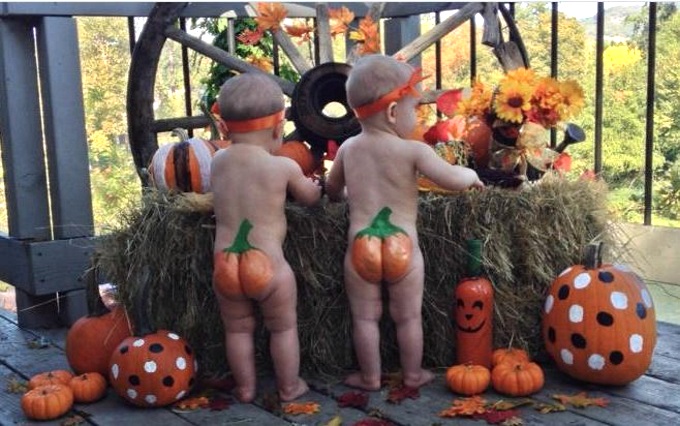 A TRUE VAMPIRE STORY FROM 290 YEARS AGO

Here's another I discovered too late for Halloween last year. As Drew Christie writes in the story accompanying the video, this is a real report from 1725,

”...in which an Austrian official named Imperial Provisor Frombald details an early written account of vampirism in Eastern Europe. The fear in the account was palpable...Sure Count Dracula is scary, but this stuff was downright terrifying.”

You can read more at The New York Times.

CAT IN A PIRATE COSTUME FOR HALLOWEEN

Watch the 27 seconds of how cleverly this is shot.

In the lead-up to Halloween a few days ago, NPR broadcast a story about why old women are so often the face of evil in folklore. There is an overview of some of the scariest old crones I've never heard of before but the conclusion to the story is this:

”In other words, old women in fairy tales and folklore practically keep civilization together. They judge, reward, harm and heal; and they're often the most intriguing characters in the story. “

At the end of the piece, NPR encouraged people to use Twitter to talk about older women in society who are amazing or inspiring using the hashtag, #GrownLadyCrush.

I didn't know about any of this until an alert about a tweet from my friend Erin Read of Creating Results (whom I often quote here) turned up in my email inbox: with this tweet:

Ha! Thank you, Erin. I'll take “ferocious and funny” as a compliment any day.

Meanwhile, you can read (or listen to) the frightening full story about evil old women in folklore at the NPR website.

Undoubtedly you recall the famous photograph from 1972 of the nine-year-old girl burned by napalm running down the road in Vietnam. It became a symbol of everything that had gone wrong with that war.

Kim Phuc was later granted asylum in Ontario, Canada and earlier this week, she traveled to Miami, Florida for treatment of the painful scars from those burns.

Until I saw this video, I had never heard of keyhole gardening but I am obviously behind the times on this – there are tens of thousands of search returns on Google.

According to Deb Tolman, the apparent godmother of the keyhole technique, it makes gardening easier – good for us old folks; no bending over – and produces an excellent medium for growing healthy vegetables.

Where I live these days, there is no gardening allowed but maybe some of you will find this useful. Watching it, I was sorry I can't take up gardening again.

Surely you've made a butt call or two – when you unintentionally push the send button on your cell phone. Now we have butt music. Classical butt music, even. 500 year old butt music. Thank reader Tom Delmore for this.

This is, of course, the famous tryptych painted by Heironymous Bosch in 1503 or so: the Garden of Earthly Delights: 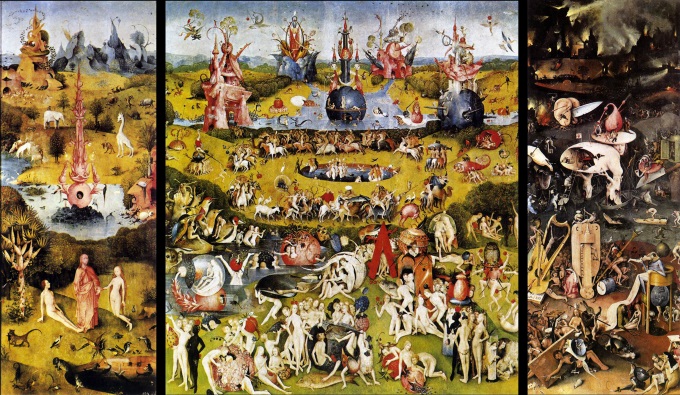 As globalpost.com reported earlier this year, there are musical notes painted on the butt of a figure in Bosch's masterwork discovered by Amelia who is a music and information systems student at Oklahoma Christian University.

”Late one night, Amelia and her friend Luke were examining The Garden of Earthly Delights... when they discovered something amazing: '...music written upon the posterior of one of the many tortured denizens of the rightmost panel of the painting which is intended to represent Hell.'” 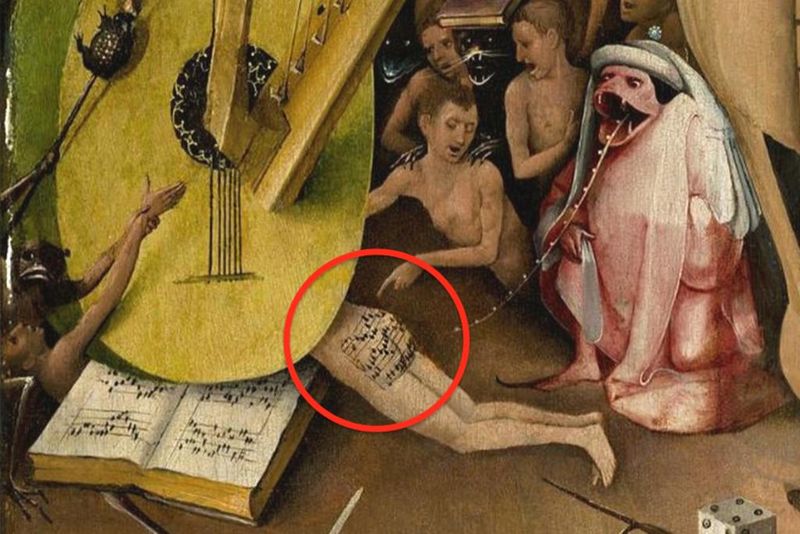 Now, again thanks to Amelia, you can hear a piano versions of what the music sounds like:

You can read Amelia's original post here where she links to a choral arrangement of the butt music – gorgeous.

Oh, god, here we go again. In the U.S., it's time to move the clocks BACK ONE HOUR tonight.

Just in time for this semi-annual ritual, Alan G sent this hilarious video, a pretend-trailer for a fake movie titled, Daylight Saving. Enjoy.


LEOPARD SNOOZING IN A TREE

I found this a week or two ago at Naked Capitalism. It's here today for no reason except that I think it is beautiful, and it seems to me that animals in their natural habitats are the best antidote to everything that is wrong in the world. 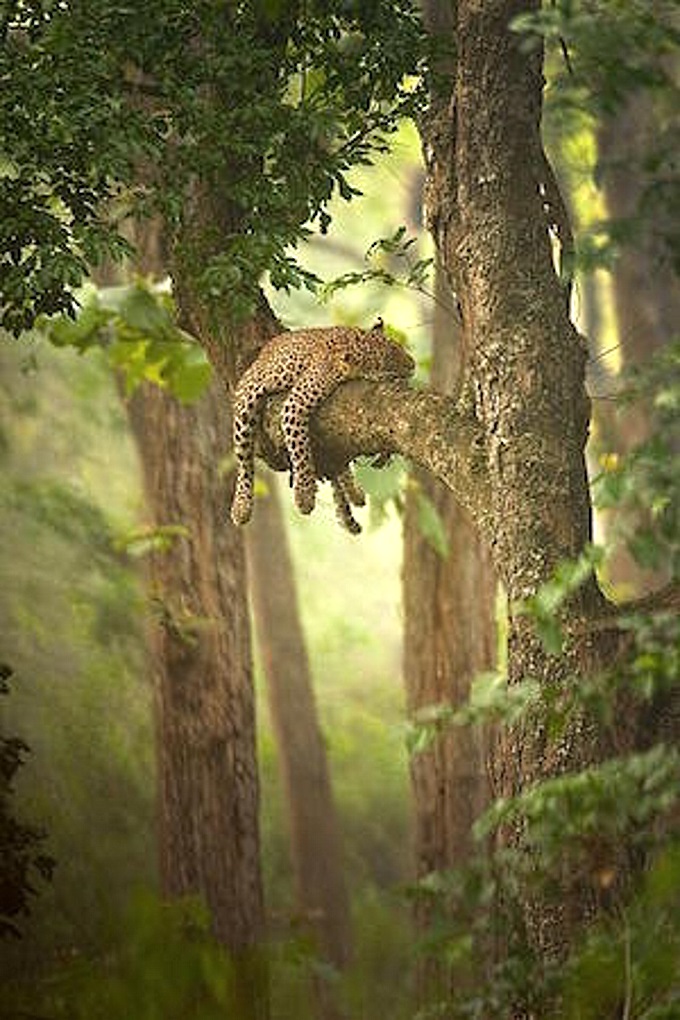 Another great Saturday blog! Thanks for the start of a good w/end, I hope! Love the leopard..........great shot & like you, I love nature...........dislike zoos a lot. Sorry, but I always have.
Anyway, the candy store owner is a treasure & so good for those children to have her as a friend. And the "piano man" another treasure in our mad world. And BTW, I guess I'm the only person who detests Halloween........dumbest day of the year. Why do Americans always overdo everything................another mystery to me. Have a great w/end. Dee :)

Being brought up in an urban environment, you would think that I would be the last person to want to grow things. However, after moving to a suburban house a few years ago, and seeing all that space in the back yard going to waste, I decided to put in a garden. I started tomatoes from seedlings in my garage and then transplanted them in the spring. Amazingly, a few weeks later huge, plump tomatoes were everywhere. I was hooked.
Zucchini followed tomatoes and then spinach and lettuce. It was one of the most rewarding things I have ever done. This keyhole technique looks interesting, especially if you live in a place with limited space. I'm not sure about all that garbage though.

I love the candy shop owner. What a beautiful smile . I look older that she does. Sigh! Anyhow, she's a treasure.