On Saturday I asked if readers would be interested In a single “interesting stuff” item on Tuesdays and Thursdays since I no longer write full blog posts on those days and I often have more interesting stuff than there is room for.

One person said no. Two others liked it. Simone suggested calling it “And Another Thing.” S.C. Jones suggested “Lagniappe” which is, as she noted, “Louisiana French for something given as a bonus or extra gift."

After some thought and a particularly wonderful thing I want to show you today, I have decided on a compromise:

When I have something that is especially worth it or is time sensitive, I will post a single item on Tuesday or Thursday. I might go weeks without a special post. Or it might be more frequently depending on when good “stuff” shows up. I'll play it as it lays.

As to title, “And Another Thing” certainly fits who I am. “Lagniappe” is a bit fancy for me but I like it equally; it doesn't hurt that it comes from one of my favorite U.S. cities.

Sometimes choices are made for pragmatic reasons and I am going with Lagniappe because it's short. There you have it and here we go.

* * *
In response to last week's horrific massacre in Roseburg, Oregon, yesterday we spent our time here responding to John Gear's suggestion for a sensible gun control program that just could be workable if anyone in power in the U.S. is serious about controlling gun deaths.

Here is another suggestion that I found Sunday at Digby's blog. She found it here. See what you think. 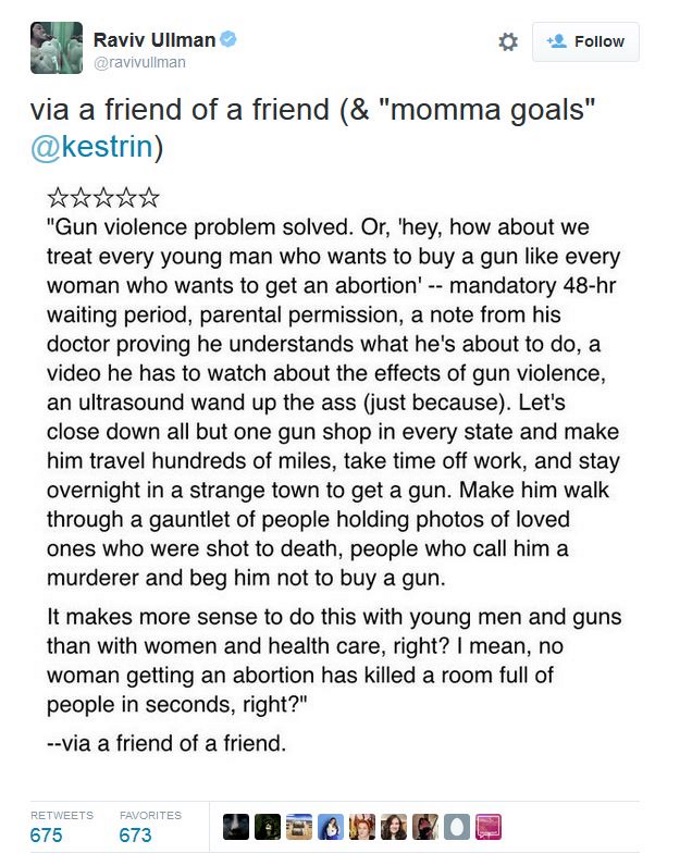 I am glad you put this on. I saw it on Facebook, thought it was great.

How I wish this could be the norm - so glad you posted this.

If we lived in a culture that prized mutual caring and respect, it would be a no-brainer. Sometimes I feel like taking a hike to another locale on this planet, where I'd be surrounded by other like-minded people. Is it any wonder that drugs, legal and illegal, plus alcohol, are a problem here and involving all age ranges? And in a way, guns are another 'coping' device.

I love NO, so also like the title Lagniappe, especially after Peter's posts recently.

Whether this was originally presented in jest or was serious, I love it! Maybe a bit of humor can make the point better than the logical thinking that the NRA rejects as a matter of course. But no, I think the NRA folks are a humorless, immovable bunch. They may laugh, but they won't give an inch and will cling ever more tightly to their precious guns -- you know, the ones that supposedly don't kill people.

Oh my gosh! That is a perfect solution. If I knew how to re-tweet what Raviv wrote, I'd re-tweet it until the cows come home. I hope others with a Twitter account will do so.

I like the suggestion & laughed out loud at the irony. A good start to Lagniappe, thank you.

Oh do I love this! Thank you! And always happy to read your posts, for the record. Wish they were 7 days a week.

Perfect solution for gun ownership - am going to email to everyone I know and ask them to pass it on!

Can't pronounce the name for the column but like its meaning 😀

For those who don't know how to pronounce lagniappe, click here to hear it spoken.

Jean R: I tweeted it. I first saw this on Facebook, really don't know who to credit it to since it had been posted all over social media. I loved it.

Lagniappe is a terrific idea! As far as a sane gun policy is concerned, in many ways we still live in the white male-dominated, wild-wild-west of 150 years ago. We have a serious contender for the GOP nomination who recently stated that losing our "gun rights" is more devastating than bullet-riddled bodies--and this guy is a neurosurgeon! Needless to say he's pro-life when it comes to women's health. On climate change, he apparently feels that god will put right what man has wrought, although he does mention that humans were charged with taking care of the Earth. Any inconsistencies here?

On some level I understand his concern with self-protection because he's a Black man in America and could end up dead at the hands of law enforcement for walking or driving while Black. However, he's not representative of the usual spokesmen when it comes to guns-for-all. If people cannot see the inherent dangers and harm in arming schoolteachers, the general public is doomed (and I mean that literally) to live (and die) with gun violence in the foreseeable future.

Jean R: I don't have a twitter account. I went to site Ronni gave above "...found it HERE." Then copied and pasted in an email to myself, then sent out.

I read this to my husband as soon as I read it. He laughed out loud and said "That's really good!"

Lagniappe is great name. and good idea! Looking forward to the next inspiration.

I love this idea! I also love the idea of requiring insurance with every gun purchase. It wouldn't cure all the problems, but it would go a long way toward meaningful change. (Also love "Lagniappe," a concept that we in Tennessee embrace also., otherwise called hospitality.)

This commentary on gun control has come up n my FB at least twice, and I reread it each time. It is clever and amusing, but of course no solutions here. I don;t know where this crazy pattern of random mas violence is heading. Sometimes I daydream that we wake up one day and realize that there's been none of these incidents in months or years, and that it stopped as inexplicably as it was perpetrated. So much insanity in various forms in the world today, but perhaps there always has been, just not as easily shared and communicated before nightly news, cell phones, FB, Twitter, etc. .Still, I'm pretty sure that the abundant amount of readily available automatic weapons makes it much more lethal these days.

An aside. The last gun shop in San Francisco is closing - the city politicos imposed too many regulations on them, like ongoing video of all transactions, etc. - so business went down. Victory is sweet.

I volunteer many hours each week with Moms Demand Action for Gun Sense in Amerca/Everytown for Gun Safety. But even after reading countless articles and posts and attending a national training, I had NEVER heard of this gun insurance idea. Thanks, Ronnie. I plan to do some research on this.

Everytown has an excellent easy-to-use resource bank for gun violence issues, many charts constantly updated and everything is documented for sources.