This was an interesting exercise. Could I fill a column with songs from 1910?

Well, that was easy, of course I could. The hard part was, could I fill a column with songs recorded in that year and have it sound acceptable to you? Well, as we have a column I imagine the answer to that question is obvious.

So, here are songs from back then and no one reading this would have heard them when they were first released. I hope you enjoy them; Norma, the Assistant Musicologist rather lacked enthusiasm for the whole idea, particularly after hearing the music.

The recording quality of some is a little problematic but remember these were laid down more than 100 years ago. It surprised me a little how many of these songs are still well known today. Of course, that could be due to my selection process.

GERALDINE FARRAR was an opera singer and movie actress. 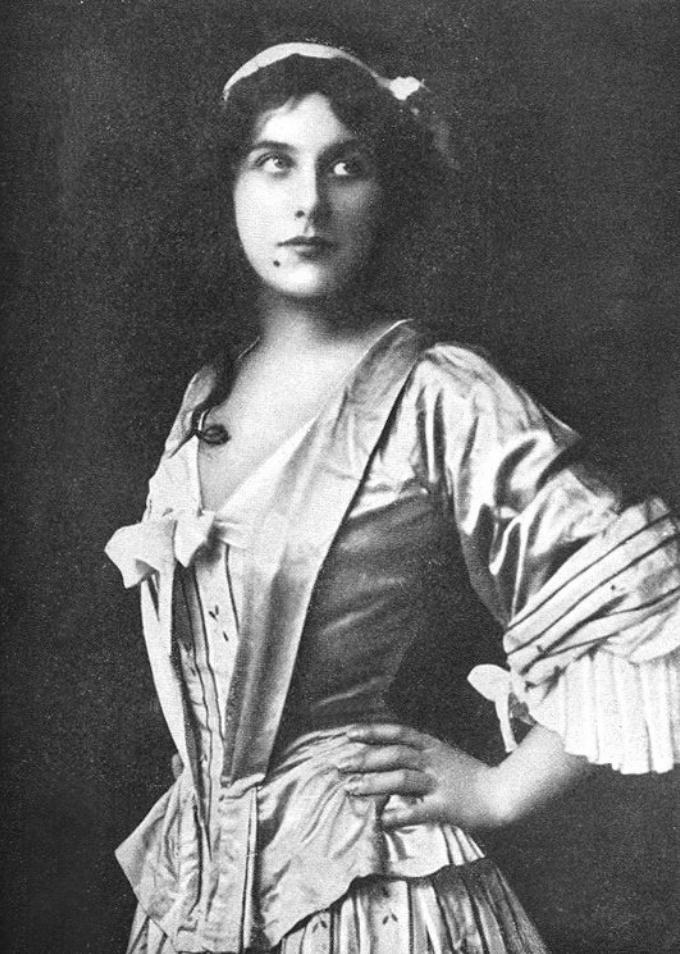 She was good friend with Caruso and had a torrid affair for many years with renowned conductor Arturo Toscanini. Her marriage to film actor Lou Tellegen was torrid, ending in divorce and the suicide of her husband. Looks like the world of film and music hasn't changed in a hundred years.

Geraldine performed in opera until she was 40 and then performed recitals and sang on the radio. Here she is with the old Stephen Foster song, My Old Kentucky Home.

MANUEL ROMAIN was born in Massachusetts or Gibraltar or Spain. 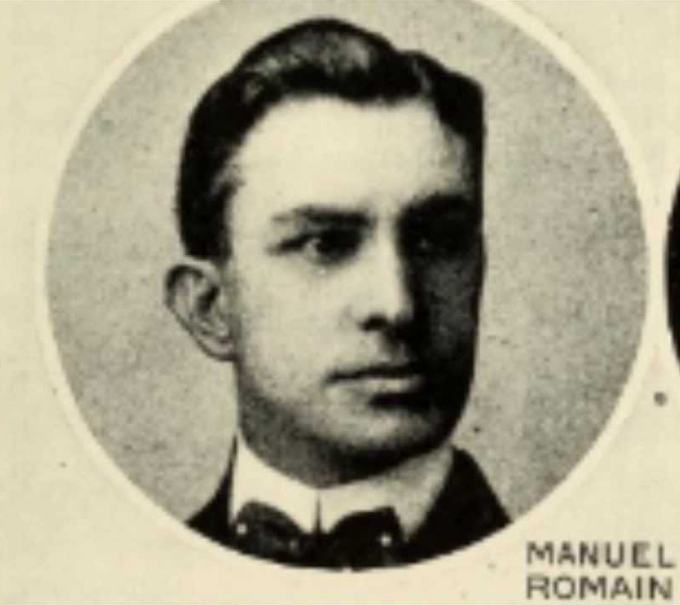 Wherever he was born, he grew up in Boston where he initially sang in church but later branched out into the secular world singing on the concert stage. He also lent his hand (and voice) to minstrel shows but we'll just glide over that.

He wrote songs but I must admit I hadn't heard of any of them. Here he sings a song just about all of us would know, I Wonder Who's Kissing Her Now.

♫ Manuel Romain - I Wonder Who's Kissing Her Now 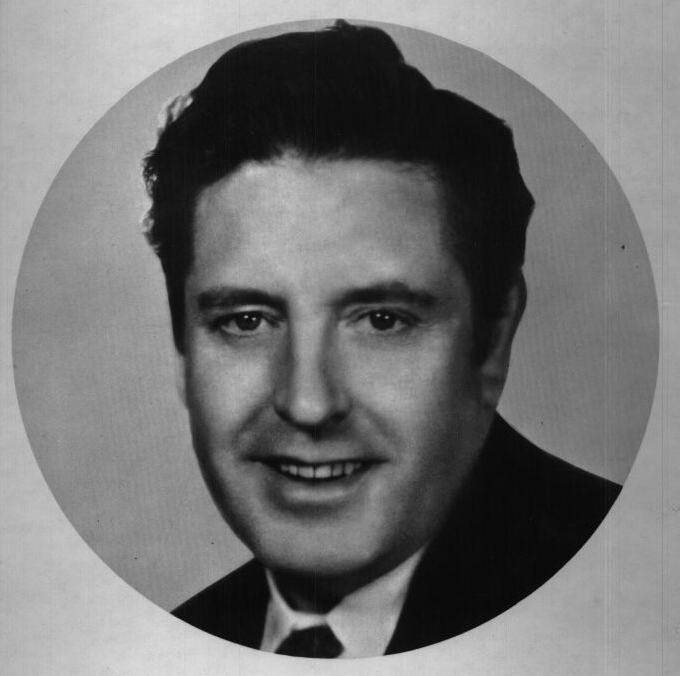 He was an Irish tenor who sang in opera as well as performing popular songs. He toured Australia (and elsewhere) with Nellie Melba around this time to great acclaim.

I noticed when I looked him up that he died on the day I was born. Alas, his singing talent didn't transfer to me. He sings Annie Laurie.

NORA BAYES started her career as a teenager in vaudeville, criss-crossing America. 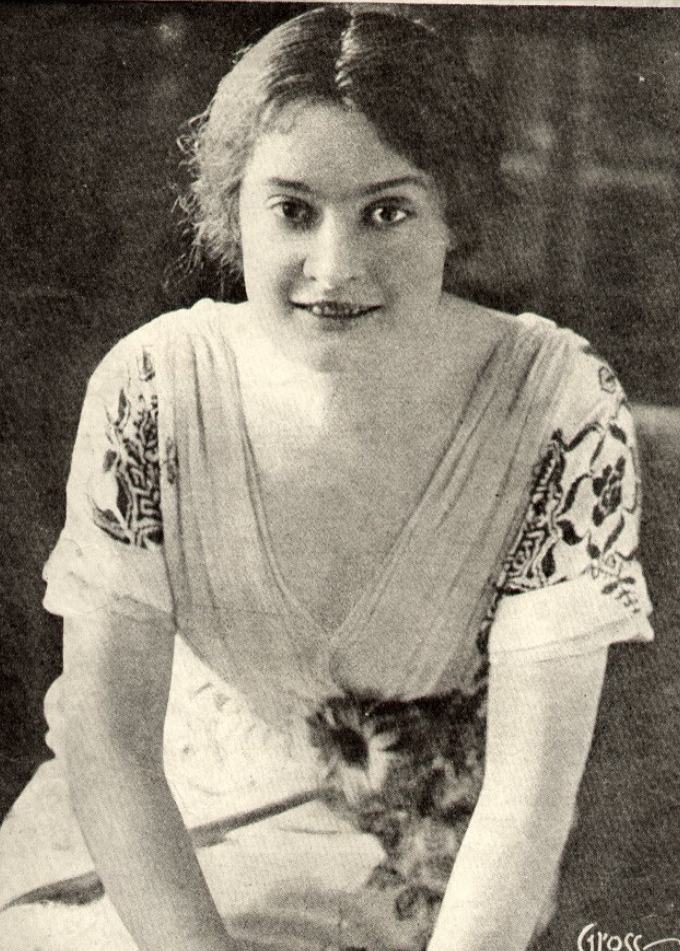 She became friendly with George M. Cohan and during the first great unpleasantness, George insisted that she was the first to record his song, Over There. It became a huge hit for her.

Before that, though, she recorded the rather famous song Has Anybody Here Seen Kelly.

THE PEERLESS QUARTET must have had tickets on themselves, as we say in Australia. It just means they were a bit up themselves to come up with that name. 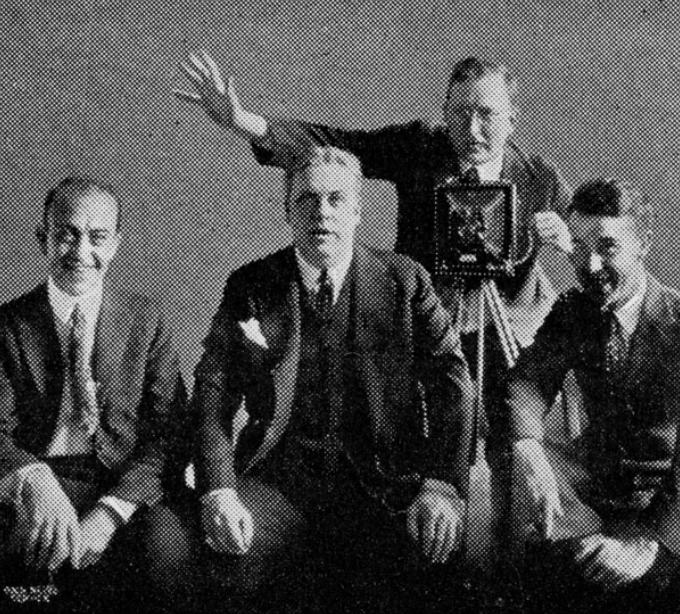 They began their career as the Columbia Male Quartet and started out recording on wax cylinders in the 1890s. They went through a couple of name changes and several members before they got to the group we have today (today being 1910, of course).

There were even more changes after this. They perform a song you'll all know, By the Light of the Silvery Moon.

♫ The Peerless Quartet - By the Light of the Silvery Moon

Now for someone who will be familiar to every reader, one of the most famous singers in history, ENRICO CARUSO. 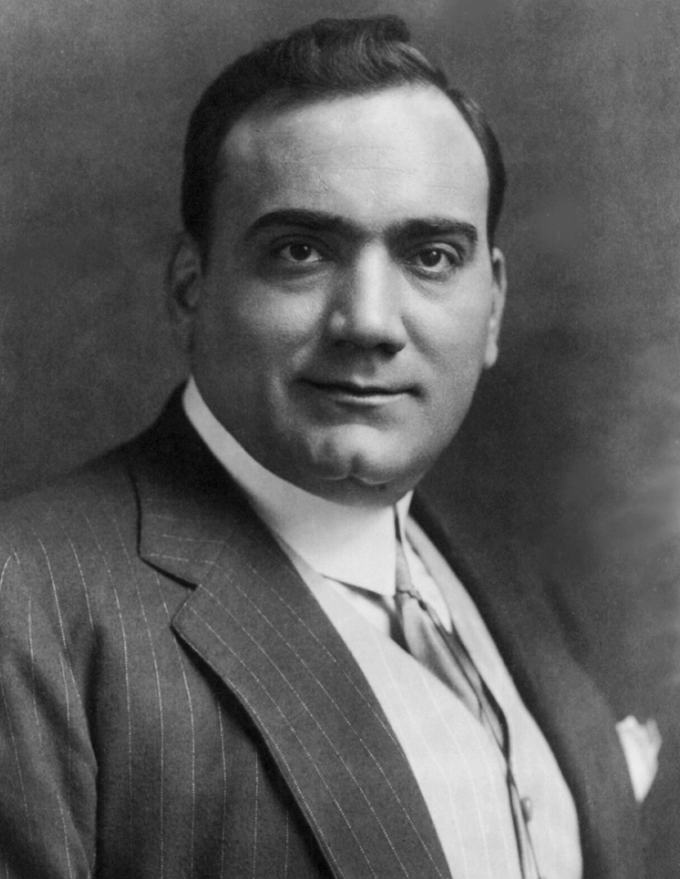 Caruso was the model for every famous (and not so famous) tenor in the twentieth century and beyond. It's impossible from this distance, and given the primitive recording equipment at the time, to judge the quality of his voice. From the evidence of this track I prefer Pavarotti, and more especially, Gedda.

However, Enrico is who we have singing Il Fior Che Avevi A Me Tu Dato (the Flower Song) from Bizet's “Carmen.”

LUCY ISABELLE MARSH was a soprano who made a living making records for the Victor Talking Machine company. Most of these were anonymous, but she also recorded under her own name.

HARRY MACDONOUGH was a Canadian tenor who started out making cylinders very early on. He later also made some records for Victor including duets with Lucy. 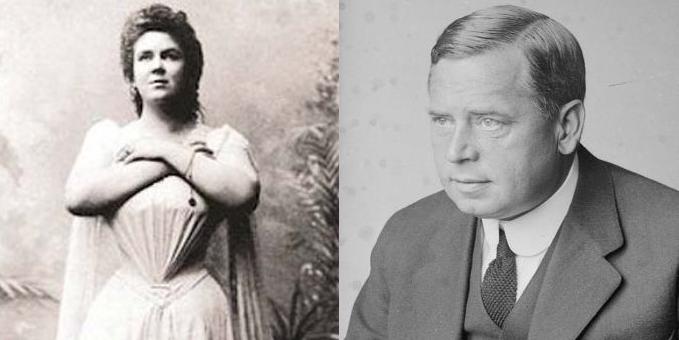 One of those was the song, Every Little Movement.

BERT WILLIAMS was one of the biggest stars of vaudeville in his day. 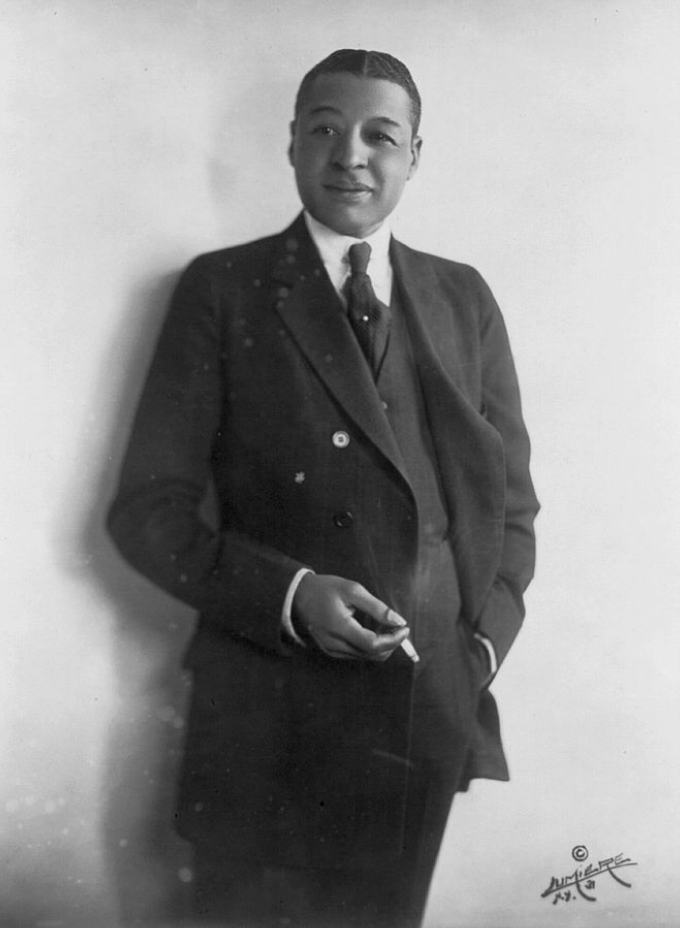 He was also the biggest selling black artist before the 1920s. He was described by W.C. Fields, with whom he shared a stage several times, as the funniest man he'd ever seen, but also the saddest. Bert performs Play That Barber-Shop Chord.

Irving Berlin died in 1989, not all that long ago. He's present in the column as the writer of the next songs. That slightly boggled my mind. The singer of the song is BOB ROBERTS. 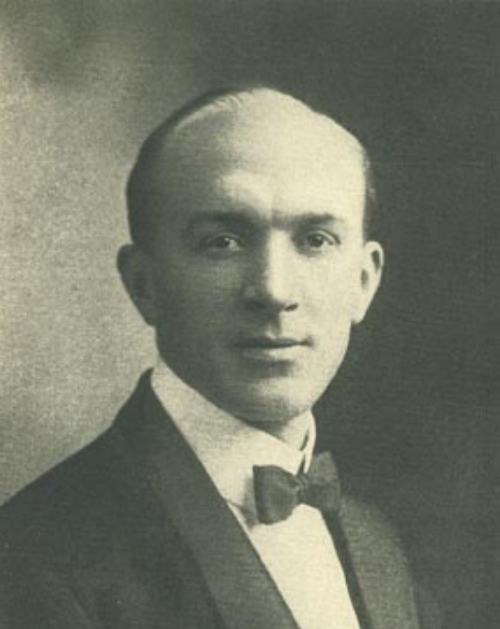 Irving's song isn't one of his best known; I hadn't heard of it before I found it. It's called Sadie Salome (Go Home).

Bob started out touring in his father's troupe of performers. He's also responsible for The Woodchuck Song. You know, "How much wood would a woodchuck chuck if a woodchuck could chuck wood?" Deep sigh.

When I first saw the name of this song, I thought it was the song Aba Daba Honeymoon under a different name. I was wrong, but I decided to include it anyway.

Besides, ARTHUR COLLINS AND BYRON G. HARLAN recorded that one too, and you'll be able to hear it in 1914 (if I ever get around to that year). 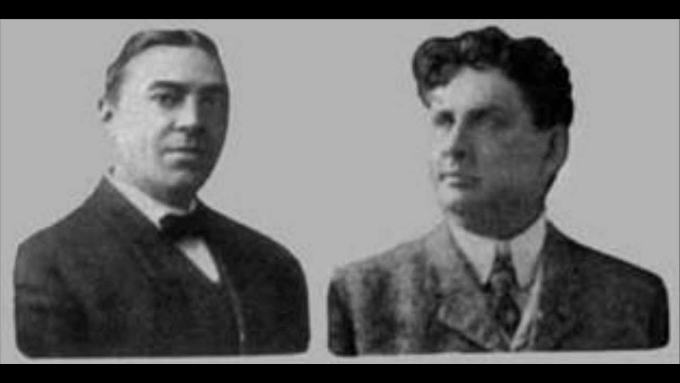 The song from this year is called >On a Monkey Honeymoon.

♫ Collins and Harlan - On A Monkey Honeymoon

Whew, I made it. That was fun (for me, I don't know about you), but I don't think I'll be able to do any earlier years than this one; the recordings are really not worth listening to.

Thanks for these delightful songs.

It was quite enjoyable to listen to this selection of singers, although I do agree that the quality of the recordings is not worth listening to (except perhaps for historical reasons).

Anyway, thank you, Peter. Your column took my mind off the outrageous and mean-spirited politics in the US these days for a little while, and that's worth a lot.

Well, you really took me waaaay back this morning to a time when I was a small child standing in front of the Victr0la winding the crank so I could hear my grandmother's recordings. My two favorites were Caruso singing some Area and "John Brown's Body " (lies a' moldering in the grave). Perhaps the Area was "The Flower".

Your recordings are of a much better quality than I remember them being. Truly amazing!

I knew all of this morning's offerings up to, and including, Harry Macdonough and Isabelle Marsh singing "Every Little Movement" (has a meaning of it's own). The rest were before my time, I guess. I didn't think that was possible.

Had to listen to "Annie Laurie" -- it's a song mentioned in "A Tree Grows in Brooklyn," sung by the character Johnnie Nolan. I didn't care for the movie's characterization of Johnnie Nolan, but loved the book's portrayal of him and I imagined it was he singing the song rather than John McCormack (if you can make any sense of that statement)... I own my grandmother's copy of that book and, since she was a first-generation Irish-American and worked for a time in a music shop, I can imagine that she would have listened to that very recording of the song with pride and sentimentality. Thank you for including it.

I love these old recordings! Thank you! I hope you'll continue: 1911, 1912, and so on. Even though the sound quality is far from modern standards, they go a little way towards recapturing a world that is lost.

I so agree with Tim when he says--

I remember the Peerless Quartet mainly for their release of a song that was on the Pop Charts in the Number 1 position for some 7 weeks the following year, 1911. That doesn't mean I slight them in the least for that great old standard "By the Light of the Silvery Moon"!