THE SHAMEFUL XENOPHOBIA OF OUR SMALL-MINDED POLITICIANS

As has become evident in the past few days, the xenophobia, hatred and racism among a large number of our politicians and presidential candidates has moved on from prudence to hysteria. A small, sad example.

”A Syrian refugee family, after waiting for three years in Jordan to be approved to come to the United States, was finally set to land in Indianapolis on Wednesday,” reported The New York Times.

“Instead, after Gov. Mike Pence of Indiana said on Monday that he would no longer accept Syrian refugees in his state, the family of three will be starting their new life in New Haven.”

In a followup to that story, The Times further reported:

”Gov. Dannel P. Malloy of Connecticut on Wednesday personally welcomed a refugee family from Syria who had been diverted from Indianapolis to New Haven.”

In the current political frenzy and fear, Malloy is brave man. More than half the governors in the United States have announced they will, like Pence, refuse Syrian refugees. So much for Emma Lazarus.

Keep in mind that every Paris terrorist carried a European, not Syrian, passport.

Nothing good is happening here: Chris Christie says not even Muslim orphans should be allowed into the U.S. Donald Trump wants all Muslims to carry special identification (heil, HItler). And Ben Carson compared all Muslims to rabid dogs.

This irrational, deeply uninformed hatred won't be going away anytime soon. I don't fear Syrian refugees; I fear for democracy at the hands of these hateful bigots.

A LITTLE BOY REACHES OUT TO A VANDALIZED MOSQUE

Soon after the Paris attacks, a mosque in the small Texas town of Pflugerville near Austin was smeared with feces and pages torn from a Qur'an. A seven-year-old boy shamed every one of our xenophobic politicians:

”Faisal Naeem, who sits on the mosque’s board, told BuzzFeed News he was giving interviews with local media outside the building on Monday when he noticed a little boy and his mom looking on.

“'I just thought they were watching on. This isn’t New York, so when there are a lot of TV cameras, people stop to look,' he said. 'But when I finished, the kid came over and gave me $20.'”

The boy's name is Jack Swanson and here is the report from channel KXAN:

Yes, it's a commercial for Thai life insurance company but it's lovely and we need stories like this to counter all the other stuff. (Thank you, Darlene Costner.)

For decades, the movies and, occasionally, television programs have thrilled us with individual jetpacks (I want one, I want one), but they were never real. Until now.

The one is this video is controlled, stable and, they say, sustainable for flight. Take a look:

You can read more at Gajitz.

Perhaps you noticed on Tuesday here that HBO removed the John Oliver video from viewing on outside websites and sent readers to see it on YouTube. That seems to have been true for his short pieces each week for a long time.

I am so grateful to HBO for making Oliver's feature essays available for viewing outside of YouTube and HBO.com each week and I'm holding my breath that they won't change that policy.

Here, from last Sunday's Last Week Tonight program is Oliver's take on the recent growth of gambling on fantasy sports. If, like me, you are not interested in sports and/or gambling, you might think this is not for you. As always with Oliver, not true.


USING A STICK TO GET UNSTUCK

So simple. So low tech. So effective. I can tell you for sure that it would never occur to me on my own.


AIRLINE TRAVEL OF THE FUTURE

We all know how awful airline travel has become. It's so terrible that it needs to be a matter of life and death these days for me to get on a plane.

Koren Shadmi is a Brooklyn based illustrator and cartoonist. His graphic novels have been published in France, Italy, Spain, Israel and the U.S. Recently, he posted his take on what passenger airline flight will become by 2050. Here are two images to get you started: 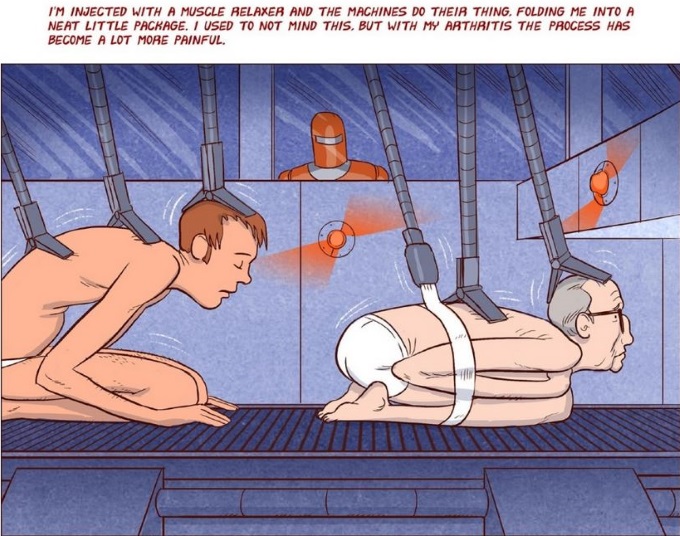 Why do I think airline executives are taking a serious look at this innovation? See the entire story and other illustrations at al Jazeera.

The Tampa Bay Times has done a lot of hard work to help us sort out the good good charities from the bad with their database of America's Worst Charities.

”America's worst charities look nothing like Habitat for Humanity, Boys and Girls Clubs or thousands of other charities, large and small, that are dedicated to helping the sick and needy,” the paper reports.

“The Times/CIR list of worst charities, meanwhile, is littered with organizations that exhibit red flags for fraud, waste and mismanagement.

“Thirty-nine have been disciplined by state regulators, some as many as seven times.

“Eight of the charities have been banned in one state. One was shut down by regulators but reopened under a new name.

“The nation's worst charities are large and small. Some are one-person outfits operating from run-down apartments. Others claim hundreds of employees and a half-dozen locations around the country. One lists a UPS mail box as its headquarters address.

“Several play off the names of well-known organizations, confusing donors.”

And that's just for starters. This report is an exhaustive and important piece of work. You can find the overview here and the list of terrible charities is here. And you can scroll down herefor a good set of rules to follow before deciding to donate.

Recently, a new sculpture was installed on the Brooklyn side of the East River in New York. If you see it from that side, it says Oy. From the Manhattan side, it's Yo. I love it.

Here's a news story about the sculpture and the artist.

I find the xenophobia and fear mongering among our leaders despicable, and it's frightening to see how many Americans agree with them. I think I fear all those xenophobes more than any terrorist because they are already here, all around me, spreading their poison. It's sad what our society is becoming, and it's exactly what the terrorists are hoping for.

I share your feelings about flying. I haven't been on a plane since 2003, and based on what I've heard in the years since, I think it will literally take a death in the family to get me on one again.

Pied Tu[e said it for me.

Okay - I need to pay attention to where my fingers are on the keyboard or read my comment before posting. Apologies, Pied Type.

Thanks for the Thai ad -- it made me feel good enough to read about our national zenophobia and listen to John Oliver finally explain to me (a head-in-the-sand ostrich about things on TV) what fantasy "sports" are.

You forgot to mention the candidates who said we should only accept Christian refugees -- an idea so preposterous it would be laughable if it weren't so offensive.

I didn't forget. There are so many more offensive statements than you even mentioned but I wanted the item to be mostly about Governor Pence backtracking after having accepted the family of refugees and the Connecticut governor who stepped in at the right moment to do the righteous thing. But imagine how terrifying it was for the family before Governor Malloy made his offer.

There is so much despictable stuff being said, recommended and put forward by presidential candidates, I would need several days of posts to get through it all. We are living in frightening times. The religious tracking via any means of refugees - by definition people who have a choice only of dying at home or taking their chances with the rest of the world - is abhorrent. There is historical precedent for refusing and/or tracking them and it did not end well.

Despicable and abhorrent are also the best words to describe the puffed up posturing of some of our Canadian citizens, Ronni.

We have many empty schools, hospitals, convents, churches that could temporarily house these refugees.

This is an opportunity for ready, willing and able retirees to jump in and help newcomers.

How does it feel to arrive in a strange new country?

Funny, not funny how some of us have already forgotten that most of us are originally from somewhere else.

"You don't stumble upon your heritage. It's there, just waiting to be explored and shared."

Actually, Bell Labs experimented with jet packs in the 1950s. I know because a girl I went to elementary school with had a father who worked there and the class attended a demo. Actually the result wasn't very impressive; guy went up ten feet, forward ten more and fell down. Not exactly useful. But military $$ was going into the project.