Therapy dogs have been around for a long time now but that doesn't mean we shouldn't take a look now and then at how wonderful they are for people.

Just for the record, cats do this kind of work too although probably less reliably, particularly in numbers. They tend to be more standoffish than dogs.

Richard Feynman, who died in 1988 at the age of 69, was a theoretical physicist, something of a Neil DeGrasse Tyson of his time. He could make science understandable to laymen and he wrote a lot of excellent essays on a wide variety of topics. I own several of his books.

TGB reader, Tom Delmore, sent this video of Feynman reading from his collection of short works titled The Pleasure of Finding Things Out. This one, on beauty, is particularly pertinent in this time when so many of our political leaders refuse to accept the validity of science.

About halfway through this five-minute reading, Feynman says,

”I can live with doubt and uncertainty and not knowing. I think it is much more interesting to live not knowing than have answers which might be wrong.”

Give it a listen. You won't be sorry.

The so-called “people's house” will be in session for just 110 days. In fact, there are no work days at all in August and October: 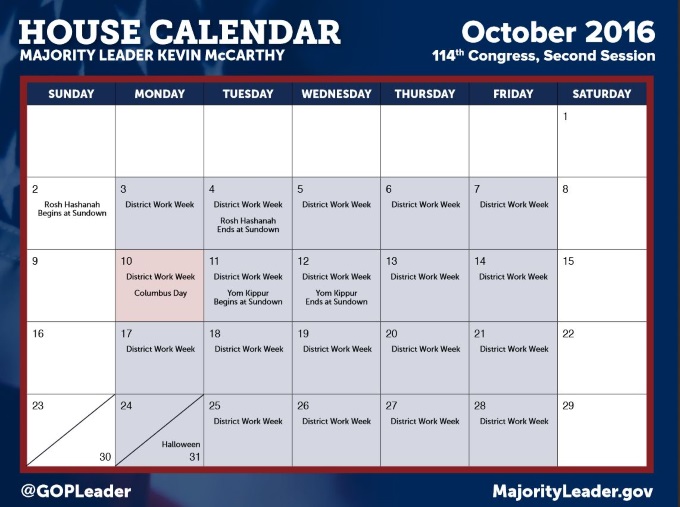 This year, the House of Representatives total number of work days is 133. In 2014, it was 112 days. The average annual work schedule for most employed people is 261 days.

JOHN OLIVER EXPLAINS HIMSELF TO CBS THIS MORNING

TGB reader Ali made sure I got to see this interview with John Oliver on the CBS This Morning program.

It's a good segment and as he does ad nauseum, Oliver insists yet again that he is not a journalist. Yeah, right.

Did you notice his excellent reason for not inviting Donald Trump on his HBO show, Last Week Tonight? Of course, Mr. Trump took to Twitter to try to refute Oliver but it didn't work: 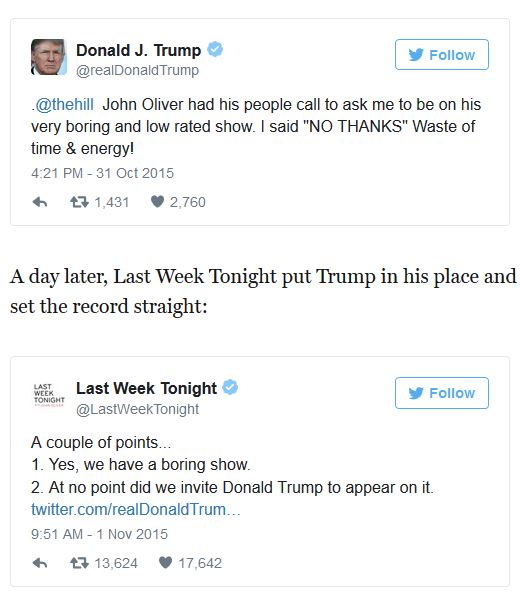 It's hard to believe Trump especially when he apparently does not know that Oliver doesn't interview people as the other later night show hosts do. You can read more here.

If you retired from the workplace before the internet really got going, it can be hard to keep up with online technology. My young friend, Marcie Rogo, reminded me this week about the TechBoomers website.

There, you can follow step-by-step tutorials on how use a large number and wide variety of popular websites. Several things at Hulu have been driving me nuts for a long time; now I understand how to use them thanks to TechBoomers and Marcie's reminder of it.

Marcie is co-founder and head of customer success at Stitch, a website designed to help elders connect with one another. Companionship is the main idea, finding like-minded people with whom to enjoy mutual interests.

Maybe you could also find a nice person for a relationship. That is not out of the question but Stitch is first a companionship, not dating, service.

Some of you may recall I tried out some online dating sites early this year to disastrous results. I did not include Stitch because it was not yet available where I live. However, I've known Marcie for several years, her integrity cannot be questioned and I know she is running a tight ship with this service.

Let's let her tell you about it:

Stitch is still growing. There are, so far, 50 communities but the top five largest are the San Francisco Bay area, Los Angeles, the New York Tri-State area, Chicago and Sydney, Australia. Take a look around Stitch to learn more.

SOMETHING FOR YOUR NIGHTMARES

According to this video, these are the biggest bugs found on Earth. I'm awfully glad I don't live in a tropical place but these gigantic insects are still amazing to see from the safe distance of a video.

At last, beginning on 1 January 2016, U.S. Medicare will pay physicians for end-of-life counseling sessions with patients. You'll recall that this idea is what set former vice presidential candidate Sarah Palin off on her “death panel” binge.

Of course there was no such thing and this time around there is hardly a peep against the provision.

”Medicare decided not to limit how often such counseling could take place, Conway said, in part because of feedback from doctors and the public that people may need repeat counseling as their health needs change.

"'If you made a choice and you become more ill, you might want to have the discussion again,' Conway explained. 'For some patients, it may need to occur multiple times in a year if they're quite ill and their circumstances may change. For other patients, they may not need this service at all in a year.'"

Peter Tibbles, the TGB Sunday music columnist, sent this video about how Aussies butcher the English language. (Butcher is my word choice, not Peter's nor the video partipants'.)

Now, if you're ever inclined to visit Peter in Oz, you'll be up to date on Australian slang and abbreviations. Feel free to laugh – the Aussies won't mind.

David Teie, who is a soloist with the U.S. National Symphony, has teamed with some scientists to develop music that your cat will like.

”...cats’ hearing develops differently and 'we mindlessly turn on music for them,' said Charles Snowdon, an emeritus professor of psychology at the University of Wisconsin-Madison who worked with Mr. Teie on the project. With its special instruments and tonal mixing, Music for Cats aims to bridge that sensory gap," he told The New York Times.

Here's the video from the Kickstarter page with more explanation and bits of the music Teie has composed:

You can find out more at the Music For Cats website where there is more cat music and if you are so inclined, there is still time to help fund the project at Teie's Kickstarter page.

Thank you particularly for the Feynman segment. Richard Feynman is one of my heroes, and I so very much agree with his take on beauty. How can knowing more about this fascinating universe ever be anything less than--

Um... I have to admit I'm not quite as courageous as Feynman. There are a few things I'd just rather NOT know about. For instance -- giant bugs!

Thanks for the GIANT BUG video. I'll be itchy all day.

Yeah, just what I wanted—a gigantic spider to pet, feed and walk on a leash.

There might be method in the madness of having a gigantic insect or two--might be a good way to keep the intruders away.

Love the cat music possibilities. I know a cat that would have, and may yet, be helped with that. She has outlived her entire litter of 4 (friend rescued her with the kittens) and she howls when she awakens and there is no one in the room with her.

I just now watched/listened to Feneyman's video. Excellent statement and beautifully photographed. The wonder of it all!

Many of our Members of Congress deserve criticism, and I'm not bashful about laying it on them. However, circulating the idea that no members do any work when back in their districts is a misrepresentation of the situation.

My congressman meets with individual constituents and groups, gets personal advice from local staff people, and researches local opinion on many matters while Congress is not in session. I dislike many things about my representative, but a lack of full-time effort is not one of them. Some Members of Congress may indeed work harder when away from D.C.

I very much enjoyed Feneyman's video and adore John Oliver whether he's presenting his own show or being on another. So straightforward, informative, engaging, all with the twinkle of his eyes.

Can't hang around here long as I'm itching to explore Techboomers and save my sanity by solving some frustrating tech problems I've experienced this year (not solved at Apple store; nor Apple's tech department when they used my computer screen; Firefox - nada; numerous other people and sites - forget it; so bearing the banner of "Never give up!," I'm off to give this site a try.