As NBC News reported, last week Donald Trump mentioned the 1997 film, Air Force One in an interview with The New York Times:

“My favorite was Harrison Ford on the plane,” Trump said. “I love Harrison Ford — and not just because he rents my properties. He stood up for America.”

In Australia this week to promote his latest Star Wars movie, Ford was asked about Trump's reference to him. Here's his answer:

One more Trump item because this one is so good. Rolling Stone contributor Matt Taibbi wrote this week that as much as some news people are having second thoughts about having promoted Donald Trump so effectively, there is no going back now.

”The time to start worrying about the consequences of our editorial decision was before we raised a generation of people who get all their information from television...

“Trump does have something very much in common with everybody else. He watches TV. That's his primary experience with reality, and just like most of his voters, he doesn't realize that it's a distorted picture.

“If you got all your information from TV and movies, you'd have some pretty dumb ideas. You'd be convinced blowing stuff up works, because it always does in our movies. You'd have no empathy for the poor, because there are no poor people in American movies and TV...

“Politically, you'd have no ability to grasp nuance or complexity, since there is none in the mainstream political discussion.”

There IS “nuance and complexity” in the rest of Taibbi's essay and it makes a lot of sense to me. You can read the entire essay at Rolling Stone.

Here is a short follow-on from our discussion yesterday of eldercare robots. This report is from the biennial robot exhibition in Tokyo that took place during the first week of December.

You can find photos here of a dozen or more different kinds of robots from the exhibition.

THE BEST CARD TRICK EVER

Well, maybe not but close enough for me this week. The magician is Dave Cremin and this was recorded in 2011:


BEHIND THE SCENES WITH PROFESSIONAL WILDLIFE PHOTOGRAPHERS

Just as I always suspected, the best wildlife photographs are the ones they don't show us. Here are three examples: 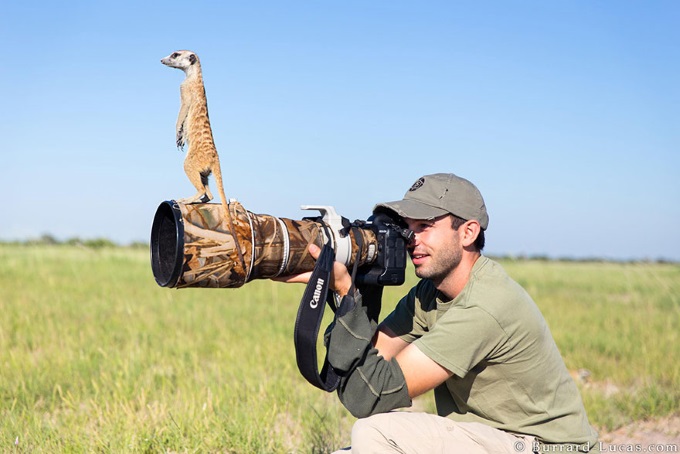 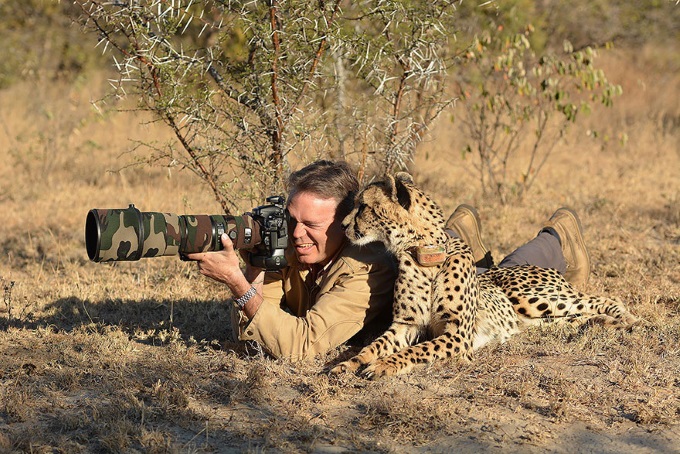 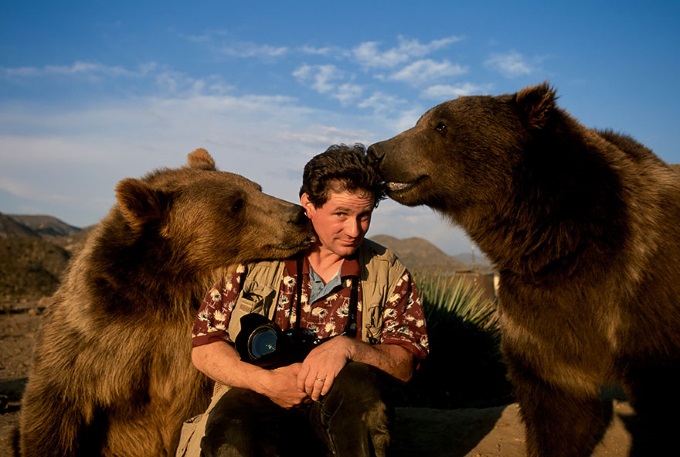 Thank Sunday's Elder Music producer, Peter Tibbles for this. There are a slew more spectacular, funny or fascinating photos of this series at Bored Panda.

The American band Eagles of Death Metal were playing at the Bataclan nightclub last month when 89 people were murdered there by ISIS jihadists. Among the victims were the band's merchandising manager Nick Alexander and three employees of their record label.

Last Monday another American Band, U2, was performing in Paris:

”Rock fans in Paris saw the emotional return of the Eagles of Death Metal on Monday night, when they joined U2 on stage in a show of unity and support after the terror attacks in the city last month, [reported the Guardian].

“'They were robbed of their stage three weeks ago and we would like to offer them ours tonight,' U2 frontman Bono said as he welcomed them on.”

Here is a short news report of the event. (The longer speech by Bono I wanted to show you has been removed.)

Last Saturday the British Sainsbury's Christmas advert was featured here. This week we have the annual holiday commercial from a German supermarket chain, Edeka. Therre has been a lot of controversy about it. Take a look:

Some say it is emotional blackmail. The Today Show on NBC spent an entire segment on it. Co-host Savannah Guthrie said, “That is the worst thing I’ve ever, ever seen...Oh, it’s morbid."

You can read more about the strong responses here. What do you think?

REPUBLICAN IT'S A WONDERFUL LIFE

There cannot be many among us who are not familiar with the Christmas classic starring Jimmy Stewart, It's a Wonderful Life. Knowing the movie nearly by heart makes this such a delicious piece of work. Thank my friend Jim Stone for it and enjoy:

A bunch (well, 12) of bearded Russian Orthodox priests have posed with their kitties for a glossy 2016 calendar. It was

”...put together by an Orthodox news website [of] 12 smiling priests in dark robes relaxing with their cats — sitting side-by-side on the sofa, or having the pet sprawled on their chest or draped round their shoulders.

“It is the first calendar to depict priests in such a style, according to one of the creators, Ksenia Luchenko, a journalist at the Pravmir website who came up with the idea...

Here is one example - Russian Orthodox priest Sergei Kruglov and his cat Shurik for the months of August. 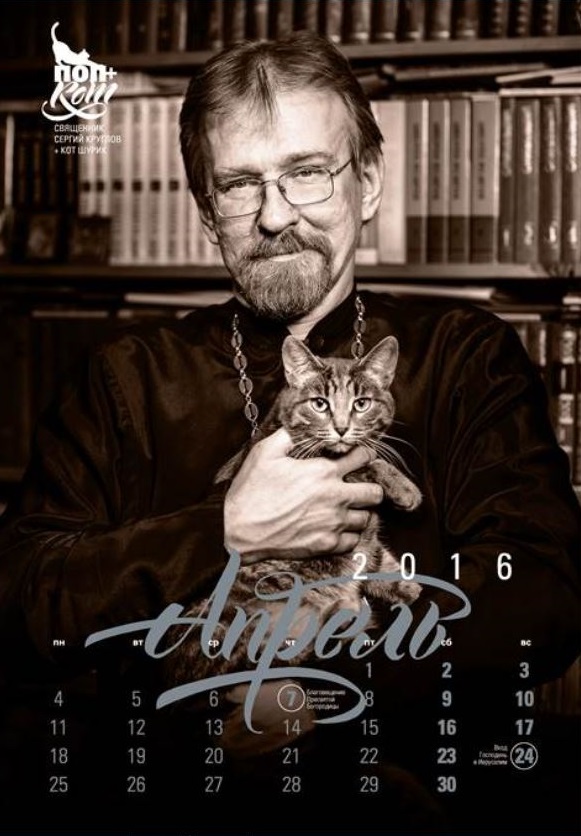 You can see more of the photographs here and here.

I remember long ago you got a cackle or two out of a video clip I once posted on my blog. Thought that clip would certainly be worthy of representing a fair political response to your posted (Republican "It's A Wonderful Life")...

Funny, Alan. Plus, I have zero memory of seeing it before so I get two shots at enjoying it.

On the wildlife photographers. A great example of Photoshop skill. If they aren't photo-shopped, may they rest in peace.

On the "Republican It's a Wonderful Life", is that the version where Bernie Sanders plays George's guardian angel?

And finally, on the Edeka commercial. Commentators should walk a mile in an elderly persons shoes before telling us how morbid they think it is.

Matt Taibbi is certainly right about Trump. Unfortunately, what he says probably applies to most of the 1% and the very well-heeled politicians who are running for office. It's refreshing to see a media person own up to the distorted thinking that media causes. Now if only they'd do something to correct it.

The commercial doesn't bother me. It might be emotional blackmail, but I've seen parents do that to that kids all the time, one way or another (hope I haven't resorted to it without realizing it).

Love the wildlife photog photos. And BTW, much as I'd like to claim them, U2 is an Irish band.

Leonardo appears so real! Robot caregivers seem unappealing to me, but should one show up as Marlon Brando, or Paul Newman, well.....

Didn't think the Edeka commercial was morbid. I suspect that was a younger person's take on that. It seemed sad and lonely and I think there are a lot of lonely, aging people. Plus I wouldn't do that to my kids and besides what do you do for an encore?

The robots fascinate me. Something a little off-putting for me thinking about having human looking one around the house. When I look something up on my smartphone I really don't like it when it tries to read the answer to me, I'd rather read it myself but for navigation the voice instructions are just what I want. I turned the personal assistant Cortana off on my newish laptop. Obviously I'm conflicted. And if the robot cat was a little more lifelike I might think about it, I have hideous animal dander allergies and would love furry pet. Maybe in a couple of years if they are better and their battery life improves.

So where did Prez O get his primary experience with reality. From his rich grandparents and his communist/socialist friends? Hanging out with the rich and famous? I just saying......

"What does that man do for an encore?"

He tried faking dead, now what?

What could he try next?

My mom would never pull a stunt like that.

She knows at least two of us would die of heart failure trying to get to her.

Harrison Ford's clever response gives new meaning to his line in a movie:

"Why do there always have to be snakes?"

Several very interesting short subjects this week, Ronni. I love Matt Tabbi's writing and miss his monthly articles in Rolling Stone..it was a great loss when he moved on and I was glad to see he's still contributing.

I'm with the "It's Photoshopped" group for the wildlife photos..at least the one with the Meercat...they haven't been domesticates-not ferrets even though they look like them-and you'd never get one to pose so nicely. It looks like "Flower" from the Animal Planet series of 10 years ago....she was a real spitfire!.

Finally I loved the Bedford Falls take..that was well done and I thank you for sharing it with us...Have a good week all.

Elle in Beaverton, OR

The Ebeka commercial made me cry. Just sayin'. And yeah, I watched it again, and it did the same thing.

I think it might be because I feel his family is very, very lucky to get such a second chance.

That's how I felt too, Sylvia.

The Ebeka commercial had a message that I think is important for families to watch. Everyone has become so busy that personal relationships and family have taken second place. This ad is also a take from the old joke about the parents whose children are too busy to come down and so one parent calls one of the children and says that he is having trouble with the wife and the wife calls the other child and says that she and their father are getting a divorce. The children fly down to FL to prevent this from happening. A little less intense than sending out cards stating you have died. On the other hand the commercial hopefully can serve as a wake up call to families "too busy to spend time with Opa or Oma"
Love Harrison Ford's response to Trump.
Loved the take on "It's a Wonderful Life." But one must also remember that back then there were many movies and novels that presented the plight of the poor and middle class against the rich, capitalists. Hence the black list and the House of UnAmerican Activities going after directors in Hollywood for spreading "subversive" messages communist in nature