John Oliver and his HBO program, Last Week Tonight, are off the air until February. But he didn't forget us at Christmas time.

This is a web exclusive of Oliver's take on how to properly regift.

After 12 of 13 Republicans each tried hard – and pretty well succeeded - during their Tuesday debate to prove how mean they would be as president to desperate people fleeing their wartorn country, look what happened in Canada (hat tip to doctafil):

You can read more at The New York Times.

While U.S. presidential candidates talk about carpet bombing most of the Middle East, a bunch of people on social media tried another approach:

“'How about castrating the image of Isis by replacing the faces on ALL the propaganda photos with bath ducks?' a 4Chan user wrote on Shit4chanSays (/s4s/) board.

“Reddit users picked up on the meme when it was posted on the r/4chan subreddit, which collects content from 4chan. 'This had me quacking up,' posted one Reddit user. Another asked: 'Would you rather fight 1,000 duck-sized Isis members, or one Isis-sized duck?'

“Since then, hundreds of images have been posted online showing fighters from the terror group with duck heads.” 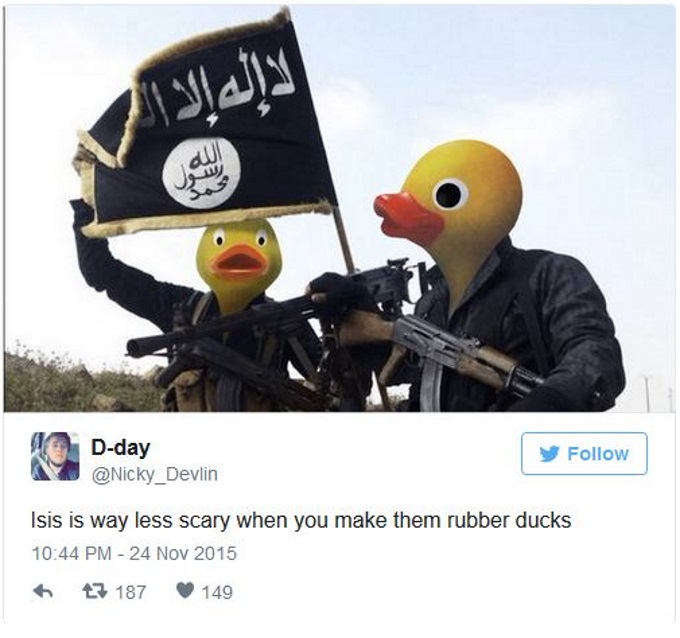 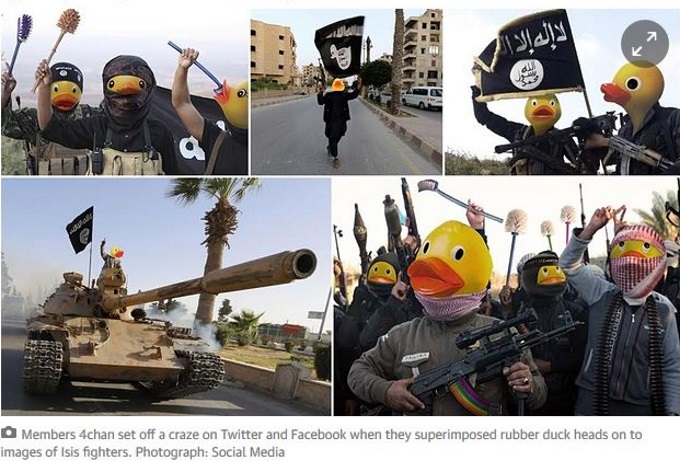 You can read more and see other ISIS/duck images here.

Actor Michael Caine has been making the media rounds to promote the new film, Youth, in which he stars with Harvey Keitel.

Of course, at his age, questions about growing old were bound to come up when a reporter interviewed him in New York recently. Here are some excerpts:

“What am I going to do? Sit around and watch soaps on television all day? That’s why I never retired. I retire mentally every time. I regard myself retired now. I don’t have another script to do, so I’m retired.

“I always had this phrase that I said many times to reporters: 'You don’t retire in movies. Movies retire you.' [AP: Yet they’re not.] That’s the point. I retire and they say, 'Oh, no you’re not.'”

“I had had great success in movies. I had done 61, 62. And I got a script and I sent it back to the producer with a note saying I didn’t want to do it; the part was too small.

“And he sent it back with a note saying, ‘I didn’t want you to read the lover. I wanted you to read the father.’ That’s when, as I like to say, you stop getting the girl, but you get the part.”

On One Similarity to his Youth Character:

“There’s a scene at the doctor’s where I go to see the results of my exam and he says to me, ‘What’s it like feeling old?’ And what struck me is the line I said to him, which is: ‘I don’t understand how I got here.’ Six years ago, I was 35. How the hell have I gotten to be 82?”

It's a good interview. You can read the full piece at The Daily Progress. And here is a trailer from the movie:

Carrie Fisher is flogging a movie too, a really big deal, blockbuster one, Star Wars Episode VII: The Force Awakens in which she plays General Leia.

She appears in the trailer for barely a second so here is a still of her from the movie looking pretty much like the age she is in real life, 59. Not that she is happy about it: 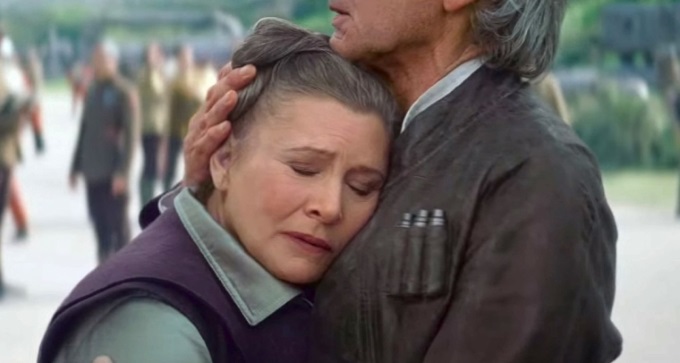 “I look melted and I look my age,” she told the Mirror. “Unfortunately, I don’t want to look my age. I would do everything but have serious surgery for it and look like a weird fish with gills.”

Fisher goes on to say that her weight has yo-yo-ed and she has been “dogged by an emphasis on looks throughout her career.”

“Appearances are treated like, you know, something; an accomplishment. Look, your parents had sex and they were both good-looking. Great for you.

“She laughs: 'Mine were good-looking and they had sex, and then it ended.' And despite being one of the biggest female icons of our time, she’s still insecure about her looks.

“'My physical self and I are not friends. We’re not speaking and I’m ignoring especially my arms lately,' she says. 'I’ve never liked my appearance.'”

It is undoubtedly tougher on female actors – Hollywood ageism is well known and mostly for women. But making peace with our old age is hard, I think, for all of us until we get to the point where we can recognize the cultural brainwashing and not waste the rest of our lives being miserable. Still, it can take awhile to get there.

This is a long newspaper story that covers a great deal of Fisher's life. I suspect they've done this to explain who she is to young fans of the latest Star Wars movie who weren't born yet when she became an icon playing Princess Leia.

You can read the full report here.

This is the last Interesting Stuff before the Christmas holiday so let's indulge in a couple of seasonal videos. I was amazed at this one showing a Christmas craft from Germany:

Everything on the YouTube page is in German and the only other place I found to send you if you want ot know more is this German-language website and here is a translator.

Not all of these ideas are winners but several are clever and useful. See what you think.


BENEDICT CUMBERBATCH IN A NEW SHERLOCK

First there is his name; it is just so much fun to say Ben-e-dict Cum-ber-batch. It flows off the tongue so nicely.

Then there is his Sherlock Holmes portrayal that has been broadcast in the U.S. on PBS since 2010.

The next series of Sherlock episodes doesn't even start shooting until spring 2016 but the producers have taken pity on fans like me with an interim special titled The Abominable Bride.

Unlike the regular series that takes place in modern times, somehow Holmes and Watson and the rest of the regulars have been transported back to 1890's London:

There are two more trailers you can see here and here.

The program will be broadcast on PBS' Masterpiece Mystery on 1 January 2016 with a repeat on 10 January. You can read more here.

This video, recorded way back in 2006, came from my friend Jim Stone. It is so infectious that if you're not grinning through the whole thing, just have someone call the undertaker.

Ridicule would certainly be a better response to ISIS than the panic that seems to be engulfing the nation. Panic is exactly what they hope to induce and too many Americans are obliging them.

ISIS aims to frighten and control.

But bullies can't stand being mocked.

ISIS can dish it out but they can't take it.

Speaking of bullies, what's the latest on Pillman?

If ever I had left the USA (it's a little late to even consider, now) I think that Canada would have been a lovely choice. It is so much more humane than is the USA.

Loved the boogie-woogie dancing bit..showed it to my gymnast/dancer grand daughter who doesn't want to do tap and it made her smile too. Ronni your subscribers send you such cool clips.
elle in Oregon

How about we carpet bomb ISIS with rubber duckies for a different kind of martyrdom. Lots cheaper than real bombs.

While the Sherlock Holms series set in modern times is great, there is something comforting about Watson and Holms not having cell phones.

Loved it all. Thanks and happy holiday to you.