Home About Archive Contact
Merry Christmas, Everyone - 2015
ELDER MUSIC: Toes Up for the Second Half of 2015

First, the wimp website posted this video of 101-year old Albina Foisy who had asked her son to stop the car so she would play in the snow. It went viral on the internet. Take a look:

The video racked up several hundred thousand views but wait, that wasn't the end of it. Later, a local news program taped Albina watching her video in the snow and the broadcast it.

Thank my friend Jim Stone for the video and Albina for showing us a bit about how to grow old.

BERNIE SANDERS ON HOW THE RULING CLASS WINS

Senator Bernie Sanders has become well known for never straying from his stump speech – hardly anyone can get him to move off a given day's message. Until he said down for an interview with rapper Killer Mike.

Here is Bernie explaining to Mike in just two minutes how the ruling class wins:

It's a smart, thoughtful, engaging interview and you will find many more clips from it here.

One last Christmas thing because it's pretty amazing. TGB's musicologist, Peter Tibbles sent this video of the Glass Harp Duo playing “The Dance of the Sugar Plum Fairy” from Tchaikovsky's Nutcracker Suite.

This one is from Peter Tibbles too. Are there any Bloom County fans out there? If so, you and I have been out of luck since the cartoon's artist Berkeley Breathed stopped producing it 1989.

But he's back, folks, he's been back since July and lately he has been taking on the Republican presidential hopefuls. Here is a recent one:

The cartoon is not in newspapers this time around. You'll find it on Facebook.

RICKY AND DORIS: AN UNCONVENTIONAL FRIENDSHIP

Oh, you are going to love this. Ricky Syers is an off-beat 50 year old street performer who found his calling as a puppeteer after a lifetime of manual labor.

While performing in New York City’s Washington Square Park, he met Doris Diether, an 86 year old community activist. They became friends and he made a marionette that looks just like her. Now she’s joined his act and the two of them can often be seen performing together.

TGB reader Cathy Johnson sent it and I was immediately charmed. Also homesick. That park was MY park for 40 years.

Maybe it's only because I believe New York City is my real, my spiritual home even if I can't live there anymore but this video of the oldest known footage of New York captivates me.

Shot between 1896 and 1905, the video includes a map orienting us to which streets and intersections we are looking at and it is so much more than just the city. It is the people from 100 years ago, how they moved, what they looked like, and maybe we can glean a little of how they lived then.


SINGING IN THE RAIN LIKE YOU'VE NEVER SEEN IT

This is from Darlene Costner who is spending this holiday recovering from a broken backbone. It is from the Festival Cirque de Demain in Paris. 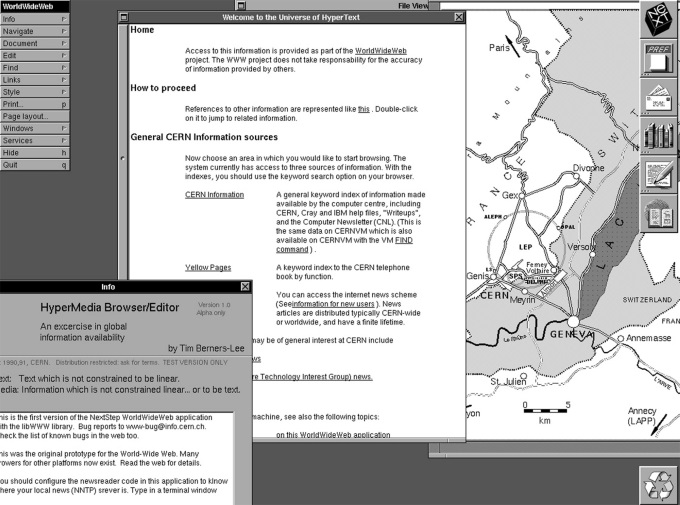 I'm kind of amazed that the Web is not older. Only five years later, 1995, I started working with a small group creating the first CBS News website. We thought of ourselves then as pioneers and I guess that wasn't hyperbole – at least, not by much.

One of the creators of the World Wide Web, Tim Berners-Lee, is, according to Engadget,

”...still as tightly involved with web as he ever was, directing the World Wide Web Consortium he helped create. In fact, he's pushing hard to protect the open web against both government censorship and telecoms' attempts to crush net neutrality.

“CERN's role, however, has changed somewhat. While it's still embroiled in networking research (specifically grid computing), it's more often known for smashing particles.”

Nobody knows how many websites there are nowadays but recently, The Atlantic made an educated guess:

A week ago, the polars bears at the San Diego Zoo got what must have been for them a magnificent early Christmas present. The Polar Bear Plunge

”...was transformed into a winter wonderland early this morning, as nearly 26 tons of glistening white snow blanketed the polar bear exhibit. The three bears—Kalluk, Tatqiq and Chinook—showed their excitement by frolicking in the snow,” reports Zoonooz.

“They rolled around in the fresh powder and wrestled with each other all morning long. Animal care staff also scattered yams, carrots, melons and beef femur bones throughout the exhibit as added enrichment, and watched as the bears pounced and dug for their prizes.”

Thank TGB's assistant musicologist, Norma, for the heads up on this and enjoy. It is a lovely way to end the final Interesting Stuff of 2015.

What a wonderful article today with the videos. I love the one about Ricky and Doris. I love the fact that age does not matter. All ages of people are human and we share much more than we will ever know. I really liked Ricky's comment on the years he spent doing manual labor while trying to be an artist until he realized that he was an artist doing these other things. Thank-you so much for sharing.

Wonderful post today, Ronni..........loved it all, but Ricky & Doris stole my heart. How uplifting & warm beyond words. No wonder you miss your ole' stampin' grounds! My dear husband missed the city for awhile after we first married. But like many we drifted back to our mid-western roots. Not a bad thing. but he still reminisces about his days in the Big Apple. :) Dee

Very good videos!! Love the Cirque guys; I think they used to paint themselves gold and do a similar routine. Polar bears loving the snow!!

While much of New York has changed since 1896, much remains as it was. Less than a 1/2 block from Washington Square Park, on Green Street, is one of the places I used to like taking out of town guests to.
Now used by NYU as a science building, the Brown Building was the site of the Triangle Shirtwaist Fire of 1911. A small plaque, often unnoticed by passers-by, commemorates one of the most significant events in American labor. The death of over 140 women sparked what led to better working conditions for all workers. When I explained to my guests how the bodies of those women, who leapt from the building, were lined up on the very sidewalk they were standing on, there was a new respect for what I had just showed them. Most of them thanked me for taking them there as they never would have even known about it.

Thanks so much for all today's videos. Your blog is always varied and fascinating, but these were even more special .

I wish I knew how to share some of them with my distant friends and family.

Happy holidays to all

I had to rush out and interrupt my grand daughters (she's a gymnast) TV viewing to show her "Singing in the Rain" She got up and did several of the flips, stands and wanted to get a copy of the routine to take to her class. Her goal is to work at Citque de Soile - they take kids at 16, tutor them and work their tight butts off in the shows. Who knows what will happen.

Also enjoyed the internet bit..doesn't seem so long ago at all.

Be well Ronni and have a good New Year

Get well soon, Darlene. We miss your comments.....and your eye for great video.

Ronni, I'll just add my praise to those above for this wonderful end-of-year collection. Can't pick a favorite. Shared the snow loving 101 yr. old with grandsons telling them I hope that's me someday, if not at that age, at least with that attitude!

Wonderful collection of interesting stuff today. The footage of NYC was fascinating. As someone who's never been there, I am captivated by this.

As soon as I saw the Ricky and Doris video I wondered about the proximity of the park to where you had lived, which seemed another good reason to send it. I'm glad others here enjoyed it as well.

While I loved the polar bears cavorting in the snow, with what certainly looks like joy, it broke my heart a little to think of how they go most of their lives at zoos without it. Sad to think of them without something that gives them such pure pleasure.

The two guys performing what seem to me superhuman feats is mind-blowing. The taller one must have neck muscles like steel beams.

Thank you for all of this, Ronni. It's rather like the finale at a fireworks display. You've provided a great year of Interesting Stuff Saturdays, but this last one was a really big blast!

Gin, for the videos just click on the video title, which should take you to the same video on YouTube. Then you just need to click the arrow at the top and choose your method of sharing---email, Facebook, whatever.

Thanks for the post. Polar bears in the snow were great, although I agree they'd be better off in their natural habitat (what's left of it). I've never been to New York but it looks like a very interesting place. I'd read about the 1911 shirtwaist factory fire. . .

I was just talking about the immigrants of the early 20th century and late 19th century...which includes both my mother and father's families....from Russia, Ukraine..and even Italy...and there were those fabulous pictures of the New York City that they disembarked their ships to find! Today's would-be immigrants from Iraq, Syria, Lebanon and other tortured parts of the world deserve the same chances to succeed in America as my ancestors had....It is my hope that we will welcome them to our magnificent 21st century America.. ellie in Colorado.