Home About Archive Contact
Being Priced Out of Drug Treatment?
Can Ageist Beliefs Increase Your Risk for Alzheimer's?

Today's note is a perfect use of the little feature recently introduced here at TGB. Lagniappe is for short items that are extra special or time-worthy enough to post on Tuesday or Thursday, days on which I usually do not publish.

Before I had poured my first cup of coffee this morning, a news alert popped onto the computer screen: 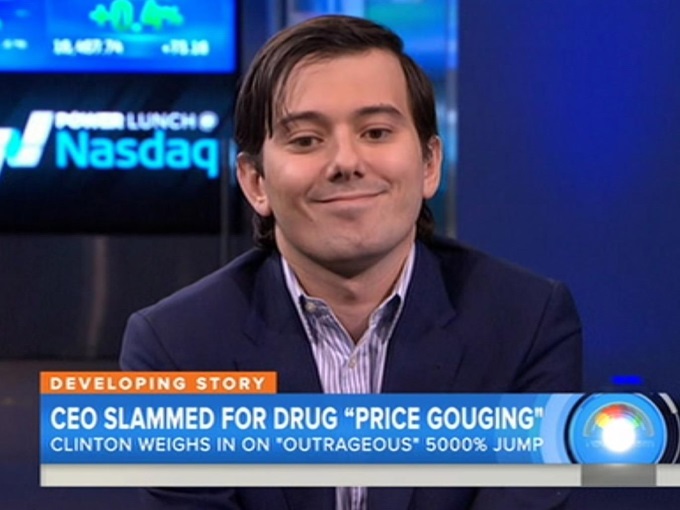 How delicious and how perfectly timed given yesterday's post about him. Here is the lead paragraph from Bloomberg:

”A boyish drug company entrepreneur, who rocketed to infamy by jacking up the price of a life-saving pill from $13.50 to $750, was arrested at his Manhattan home early Thursday morning on securities fraud related to a firm he founded...

“The federal case against him has nothing to do with pharmaceutical costs, however. Prosecutors charged him with illegally taking stock from Retrophin Inc., a biotechnology firm he started in 2011, and using it pay off debts from unrelated business dealings. He was later ousted from the company, where he’d been chief executive officer, and sued by its board.”

Yes, yes. We all know he is innocent until proven guilty but somehow I have no difficulty believing these charges filled with such phrases as payoff agreements, fake consulting agreements, unauthorized appropriations, fraudulently reclassifying, insolvent, and more.

”The company alleged in a complaint filed in Manhattan federal court that, through a disastrous trade with Merrill Lynch in 2011, Shkreli cost MSMB more than $7 million, leaving it virtually bankrupt.

And all that barely scratches the surface of the story which you can read in its delicious entirety at Bloomberg. I am sure that like me, you will appreciate this little kicker from reporters Christie Smythe and Keri Geiger:

“'Some of these companies seem to act more like hedge funds than traditional pharmaceutical companies,' said Senator Susan Collins, a Maine Republican who ran the recent hearing.

“George Scangos, CEO of biotechnology giant Biogen Inc., went further, saying in an interview, 'Turing is to a research-based company like a loan shark is to a legitimate bank.'”

The arrest couldn't happen to a more worthy guy. Not that I would indulge in anything like schadenfreude, you understand.

It couldn't have happened to a more deserving individual. Yea!

I just realized how much he looks like Jim Carey...but not as funny.

Good to hear the authorities found the back door. Maybe he'll have to sell his pharmaceutical company to get some cash for his upcoming legal dealings?

This is great news. I hope this will lead to getting that drug company out of his hands. He's first class scum and deserves whatever the Feds can dish out to him.

Picture Pillman, crouched in the corner of a prison cell, staring terror-eyed at his cell mate, a massive, huge headed "off his meds" butt to brain tattooed gangbanger, named Sue. (apologies to Johnny Cash)

Use your imaginations.. think Shawshank Redemption, the movie.

Guard:
(Who has an eerie resemblance to John Goodman after ten days hunting pythons in the Florida Everglades, and bagging a hundred big ones, but got an infected big toe in the process, so is in NO MOOD)

"That's mighty hilarious coming from you. Tickle me so I can laugh. No, don't."

"Shaddap and eat your beans, loser. Better hope you don't have gas later.
Sue has zero tolerance for a stinky cell."

Guard walks away to a chorus of raucous, insidious cackling, mixed with taunts of what Pillman can expect the minute his greedy a$$ hits the prison yard.

Sue stands up, starts cracking his knuckles, slowly, one by one. Pillman flinches like a cat at every crack.

Sue proceeds to remove his prison shoes, examines his toenails, puts his shoes back on the wrong feet, just to screw up Pillman.

Great! If there aren't laws in place to prevent price-gouging on medication, there should be.

Yes, yes, yes! Doctafill, you have a future in screenwriting. And Ronnie, no worries about your brain when you use words like "schadenfreude." ;-)

Cosmic justice. AND his lawyer was arrested also! Happy Holidays to us!

When you consider how easy it is for the average or low income person in this country to get arrested and given outrageous sentences for fairly small crimes and then see that guys like this get away with outrageous crimes on so many levels and rarely get arrested or convicted. And if they do they usually spend 18 months in a federal country club. Let's hope this guy spends a good share of his life in a maximum security prison - yes! Loved the Doctafill version of the story!

Ha, ha, ha, I hope they actually put him away. Not holding my breath though. He deserves it.

I was taught not to delight in the misfortune of others, but I doubt that included crooks, criminals, etc. So HURRAY!! WHEE!! YIPPEE!!

That was the best news in a long time. He must be one of the most hated men in the country, deservedly so.

He'll be out on bail. He probably has a back door plan himself. He probably knows which country to escape to, and I wouldn't put it past him. But yes, glad the Feds got him at least for now. Like everyone here, I have a low opinion of hm. I imagine he is a sociopath.

Total Karma, to say nothing of justice! I hope all "back doors" eventually close for this little twerp and that prison gates lock firmly behind him for a good long time. That should wipe the self-satisfied smirk off his disgusting face. Maybe he wasn't "entitled" to steal from the rest of us after all. And he thought he was so smart. . .

HAH! One for our side!

My first reaction was to picture this jerk's "what me worry" face, plus his hands and feet, poking through public stocks with splattered rotten fruit all over him. But after reading doctafill's hilarious take on a possible prison experience, I was content with imagining less medieval punishment. Just so he's punished big time. Now if they could just put all the other pharmaceutical drug kingpins In prison with their soul mates, the street drug kingpins.