Home About Archive Contact
The Generations of NCIS
ELDER MUSIC: Give My Regards to Broadway

In The Asian Reporter, there was a story recently about the sale of cow dung patties in India. As you probably know, dung is an ancient form of fuel throughout the world.

Now, cow dung from India is selling, as the headline in the paper noted, “like hotcakes.” That wouldn't be news except for how it is being sold and snapped up these days [emphasis is mine]:

”The patties — cow poop mixed with hay and dried in the sun, made mainly by women in rural areas and used to fuel fires — have long been available in India’s villages.

“But online retailers including Amazon and eBay are now reaching out to the country’s ever-increasing urban population, feeding into the desire of older city folks to harken back to their childhood in the village.

Here's part of the Amazon page:

It's not just that east meets west in this story but that the 21st century meets – oh, about 10,000 BCE. The Amazon page is here.

A few days ago those militia “patriots” who are occupying the Malheur National Wildlife Refuge in southeastern Oregon for some reason or another, issued a hilariously long list supplies they want donated.

According to GQ, the list included shampoo, conditioner, oven cleaner, even French vanilla creamer for the tough guys.

Here's a report on how people responded to the urgent request list:

I have no interest in sports. Nor do I care about reality shows. I don't have grandkids so I have no need to keep up with kiddie shows. I follow news and politics, some documentaries although with a few exceptions the quality has been slipping in recent years.

So what I watch when I want to veg out are mostly dramas and except for old favorites, I've been having a terrible time figuring out what to choose.

Now I know why: the number of original scripted shows on television has nearly doubled in just six years. Look at this chart: 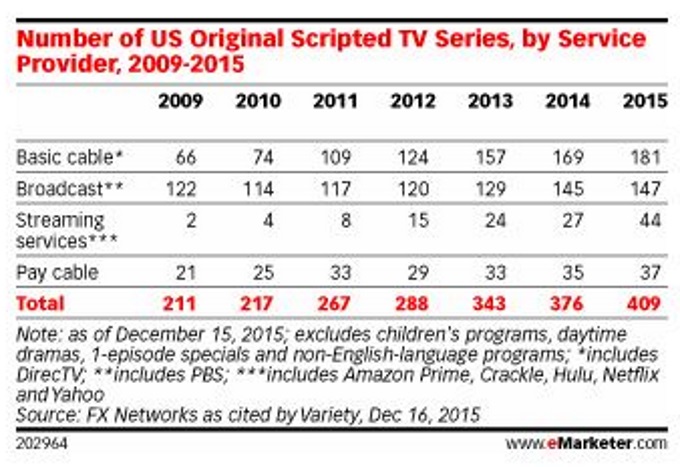 From 211 series in 2009 to 409 last year. That's way too many reviews to read or promos to watch. At this rate, I suppose my viewing will just dribble away as my favorites are canceled one by one and I don't bother to find new ones.

DOGS IN THE ICE AND SNOW

Dogs love to play outside in winter weather and it's a hoot to watch them having fun.

WHICH CANDIDATE DO YOU MOST SIDE WITH

I seem to recall doing this quiz during a previous election cycle with other candidates. It's a bunch of question on the usual issues with an opportunity in the left sidebar to choose how strongly you agree or disagree with the position.

It includes all the candidates, even the Republicans who have dropped out. I tried it and came in pretty much as I expected: I side with

Darlene Costner sent this. Give it a try yourself at I Side With and let us know who you side with.

There has been a sizeable uptick in criminals calling elders pretending to be Medicare employees asking for the person's bank account number. You would think anyone who got such a call would hang up, but apparently not.

This has become a big enough problem that not just Medicare but the U.S Federal Trade Commission has issued an alert. The first thing for you to know is that Medicare will never – as in never - ask your bank account or Social Security or any other number on the telephone.

If you get such a call, here is what the FTC says to do:

You can read the entire alert here.

Apparently wild coyotes do not play ball games. But this one did. As evnissyen explained on his YouTube page:

“I saw this guy playing on the hill while I was getting ready for work. It's pretty rare to see a coyote this close to the house at all, and totally unexpected to see one playing with the neighbour-dog's ball in broad daylight!”

Thank doctafil for this video. You can read more about coyotes at the National Post if you're a subscriber. It doesn't allow me to open the full story.

AND THE REPUBLICAN PRIMARY COMPAIGN ROLLS ON

As you probably know, Senator Ted Cruz has been running around this week on his presidential campaign disparaging New York City as a way of attacking Donald Trump. It came up at the Thursday evening debate:

“'I think most people know exactly what New York values are,' Cruz responded. Well, Ted, there are a couple of implications there, reported Balloon Juice, "and he went with both. 'Everyone understands that the values in New York City are socially liberal or pro-abortion or pro–gay marriage,' [said Cruz]. Check."

New York hometown newspaper, the Daily News wasn't going to let anyone get away with maligning their fair city. They ran with this front page on Friday: 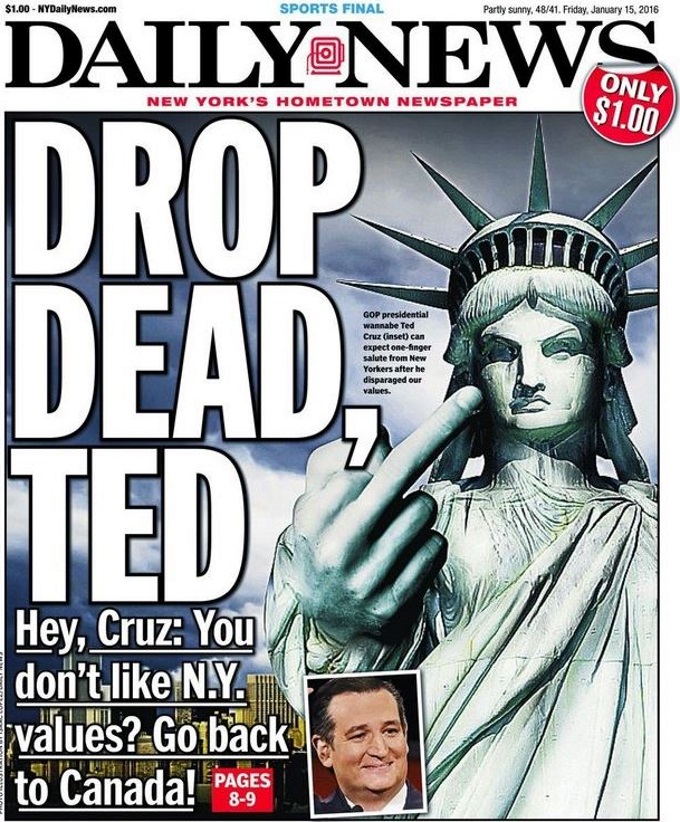 If you set aside your disgust with the schoolyard level of debate performance from pretty much the entire Republican field for moment, you gotta enjoy the sideshow. (Hat tip to friend, Jim Stone)

My apologies for losing track of who sent me a still image of this monkey. I've since tracked down a video and it makes me smile every time I watch it. We're not so different from our monkey cousins at all.

Love the dogs in the snow. Needed that morning belly laugh. Thanks again Ronni for making my w/end better. Dee

Thanks to the effort and time you put into this weekly collection. I always find something valuable and enjoyable. Thanks so much!

I'd have sworn the number of good scripted dramas on TV had dropped precipitously and cheap-to-produce reality shows had taken their place. I guess it's just that most of the new dramas don't appeal to me.

Those scam callers don't have a prayer with me. I don't answer numbers I don't recognize and I block them immediately thereafter. There's a better chance I'll accidentally block a legitimate caller than answer a scam call.

The theme of animals enjoying play and amusement was pretty strong today. I think I had almost as much fun watching the coyote with the ball, dogs in snow and ice, and orangutan with the disappearing ball trick as they did.

It's amazing to me how prevalent scams are, and that people still fall for them. We never even answer our phones anymore if we don't recognize the number. If it's important and legitimate, we figure that someone will leave a message, send a letter or turn up at our door. It's disturbing that there are so many of theses outright scams, as well as so many soft scams.

Thank you Ronni for the (mostly) lighthearted start to the weekend.

Cow dung patties not surprising. I've been to Tibet where the country people have only yak dung patties as there are very few trees on that high, mostly desert-like plateau. I've seen them stacked outside peoples home many places. I understand it's has an unpleasant smell but, hey, if you have nothing else to cook with ... and many have no access to any kind of gas to cook with. Amazon still doesn't deliver to most of Tibet.

If everyone promotes the "I Side With" site, we can nominate and elect Bernie - a lot more Americans are pragmatic than the media wants to convey.

RE: your programs. What a nice example of the "paradox of choice"

Since we're not in a key demographic any longer people have little reason to produce programming for us. I share your TV difficulties and refuse to have cable.

I read an article about a contemporary drama called "Longmire" that A&E was going to drop. They said it skewed too old. I knew I might have a winner to pursue. I sought out videos from the library. This year Netflix picked it up. I find it interesting and intelligently written.

Once upon a time, many moons ago, we had a Dachshund. A major snow storm left 3 ft. of snow. My son took the dog outside and threw snowballs for him to chase. He would bound in and out of the snow, disappearing when he was on the ground and appearing as he caught the snow ball. It was so funny and I have an old film of him someplace as he played in the snow. Memories.

The coyote is so clever taking the ball up the hill so it will run down so he can chase it. Animals are much smarter than we give them credit for being as the Orangutan proves.

i was not surprised to be told I am a Bernie supporter!

I was almost tied......Hillary then Bernie! Either one is fine....no GOP
LOVE THE DOG VIDEOS

I too loved the dogs in the ice and snow. I needed a good laugh this morning and got it. I
figured my husband could use a good laugh also and beckoned him to come watch. He was amazed at the agility of the dogs and the fun they seemed to be having. He also laughed and laughed.

As for the candidates: Sanders 99% and Clinton 96%. The lowest was Carson at 5%--no surprise there.

Just wanted to add, another thanks to you for all the work on this blog. I just discovered it and have bookmarked the link so I can continue to follow it. There really isn't much out there for a 69 year old, youngster, to read and relate to. This, however, is right up my alley and I am really enjoying it.

It's an orangutan, isn't it?

96% Bernie, 92% Hillary. Not really a monkey, a great ape (orangutan). Read recently that almost all mammals laugh, we just don't recognize the laugh or we can't hear it.