Home About Archive Contact
The Theme of an Old Woman's Life
ELDER MUSIC: 1951 Yet Again

Certainly this has gone viral already but I can't resist posting it. While the east coast snow storm is still in full surge, Tian Tian, a panda at the National Zoo in Washington, D.C., appears to be in panda heaven.

Now, back to our regularly scheduled Interesting Stuff.

Nick Ercoline and Bobbi Kelly had known one another for 10 weeks when, in August 1969, they went off together to the Woodstock Festival in Bethel, New York. Someone named Burk Uzzle took this photograph of them:

You will remember that it rained for most of the Woodstock weekend – mud, wet and cold everywhere. Later, Uzzle recalled that on Sunday he left his makeshift tent with two cameras around his neck:

"'Gracie Slick of Jefferson Airplane was singing, bringing up the dawn,' he recalled to Smithsonian magazine... 'And just magically this couple stood up and hugged.'

“They kissed, smiled at each other, and the woman leaned her head on the man's shoulder. 'I just had time to get off a few frames of black and white and a few of color, then the light was over and the mood was over,' Uzzle says of what would become his best-known photograph.”

Best known because it became the cover shot on the Woodstock album. Many years later, Nick and Bobbi were still together, as you can see here in a photo taken in 2009: Thank TGB reader Tom Delmore for this item and you can read more here.

Apparently, not all actors, even big name actors, are good at kissing on camera or, at least, not good at making the right kind of kissy noises. Meet “kiss replacement artist," Glen Doshee, and try not to laugh too hard:

Last Monday or Tuesday, I was watching the video screen as the supermarket checker rang up my purchases when cauliflower appeared with the price of $6.78.

But it was – something like $3.99 a pound that day. Whoever heard of such a thing. A couple of days later, a New York Times report on $8 cauliflower in Canada caught my eye. They blamed it on falling oil prices:

”The recipe for high-priced cauliflower starts with the currency.

“As prices for commodities have dropped, the value of the Canadian dollar has fallen, a direct link to an economy that is dependent on oil and other resources. It makes imports, like fresh American vegetables during the dark Canadian winter, look especially costly.

I feel for my Canadian blog friends but it was remiss of The Times not to mention that cauliflower prices are equally prohibitive in their home country.

I'll be skipping that veggie until it is, maybe, a better price at the local farmers market in the spring. You can read more here.

Here's another from TGB reader Alan Goldsmith, this one about a Leptocephalus larva. As the YouTube page explains:

”This large size leptocephalus must be a species of Muraenidae (moray eels), and probably the larva of a long thin ribbon eel, which is metamorphosing, not feeding, and is entering shallow water to finish metamorphosis into a young eel. (Larva identified by Michael J. Miller)

“Leptocephali are the unusual transparent larvae of eels and their close relatives. Because they are transparent they are so hard to spot and are hardly ever sighted. We were lucky enough to see one of them!! Filmed by Barry Haythorne and Rob Rutgers, HRF U/W Production.”

Unusual to see - also beautiful and eerie. Take a look.

”...creates colorful street art all around the world. His large scale murals most frequently depict children and are bursting with colors. Malland often collaborates with local artists, so his work tends to be contextual.

Here are some examples: 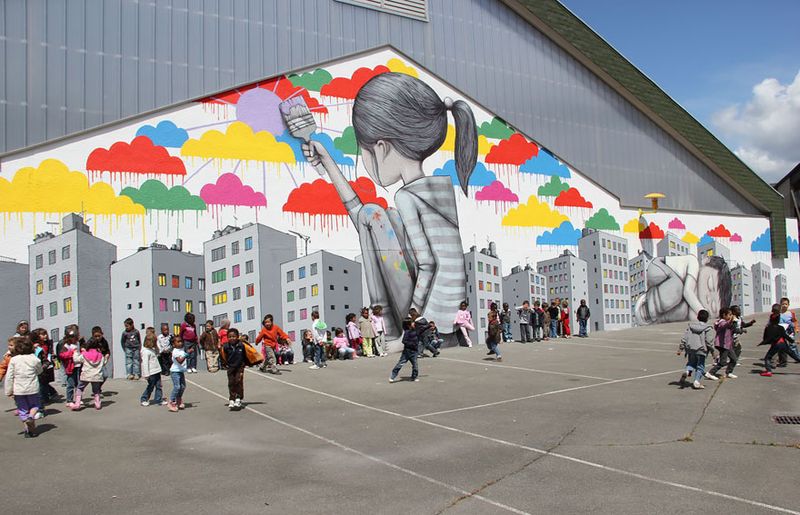 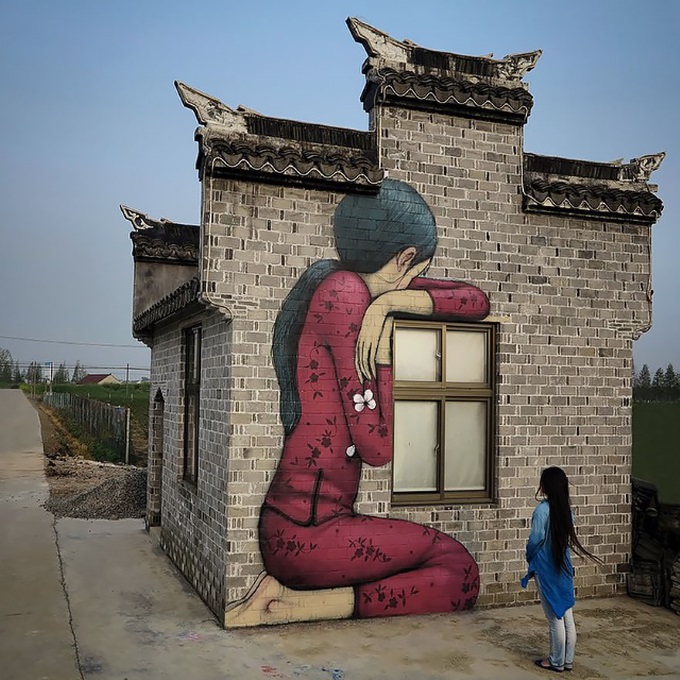 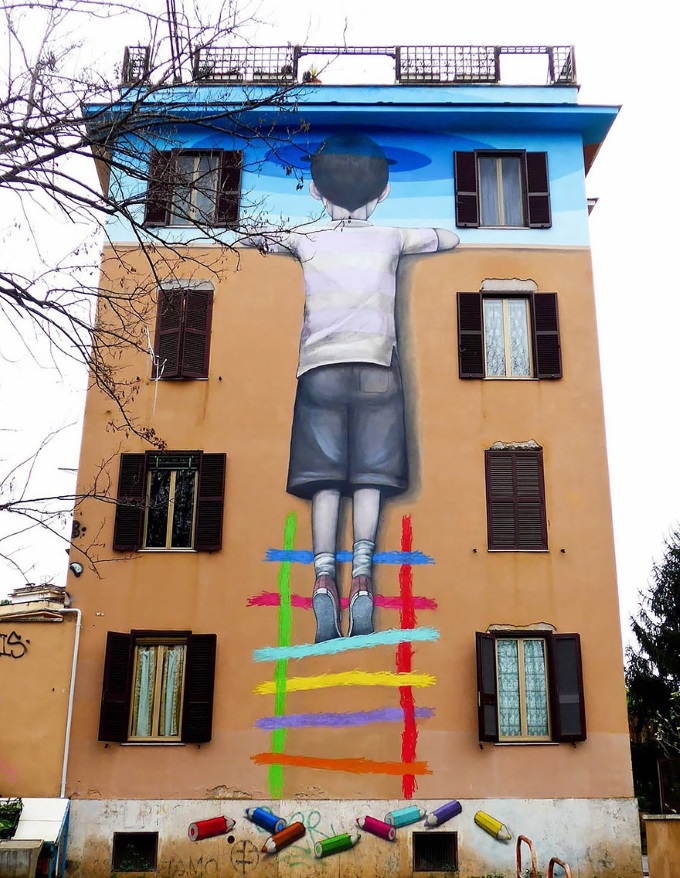 ”The Paris-born artist has been active since the '90s. He released two books about his travels and street art. The last one is called Extramuros. It captures 3 years of his 'globepainting' when he was travelling and creating in such coutries as India, China, Mexico, Indonesia, and Vietnam.”

And he is especially prolific; there are hundreds of painting some of which you can see here and here and here.

ROBERT GATES ON THE PRESIDENTIAL CANDIDATES

On MSNBC Tuesday to promote his new book, A Passion for Leadership, former Secretary of Defense discussed the attributes needed for effective presidential leadership.

It's always fascinating to listen to the people who were in the room when the big decisions were made when they are free, finally, to speak their minds. Here, he discusses the current president, past presidents and potential presidents. Whether you agree with him or not, gutsy fellow.

Americans have known about Necco all our lives. Yes, the company makes Necco wafers but they also make those little candy hearts we have at Valentine's Day with sweet little messages of love and affection.

To celebrate its 150th anniversary, Necco is beginning a new ad campaign that, as Adweek reports,

”...seeks to give the brand a modern makeover by plugging into social themes, including marriage equality. That's a novel approach for the confectionery category and a new recipe for this historically conservative marketer, which produces some 2.5 billion—yes, that's billion—of the candies each year...

“Toward that end, Necco is inviting folks to visit a contest website and share their sweet stories 'of sharing, love, friendship and words from the heart' for a chance to win $5,000.

You can find that video on the Necco website along with others that have been submitted for the contest. You could submit your own story, too, if you want.

A big thank you to Chuck Nyren for this item.

ANOTHER WEEK, ANOTHER ELDER SCAM ALERT

Last week it was a Medicare email scam. This week, The Federal Trade Commmission (FTC) is warning about a Social Security scam:

”The subject line says 'Get Protected,' and the email talks about new features from the Social Security Administration (SSA) that can help taxpayers monitor their credit reports, and know about unauthorized use of their Social Security number.

“It’s a phishing email to get you to click on a scammer’s link. If you do, a scammer can install malware — like viruses and spyware — on your computer. Or, the link might send you to a spoof site — a lookalike website set up by a scammer to trick you into entering your personal information.”

More information and instructions on how to avoid this scam at the FTC website.

Australia is full of oddities – odd to me, anyway. This one is an entire town where most of the people live in underground homes dug out of stone. Plus, the town has a wonderful name, Coober Pedy, well known – in gem circles, I imagine – for its opal mines.

I can't think why Peter Tibbles hasn't mentioned this fascinating place to me. Take a look.

Politics are fractious, the economy is scary and the weather, at least in the eastern U.S., is awful. We need this lovely video, I think.

I love murals, so was delighted to see Seth Globepainter featured. Isn't his work fabulous! I didn't know about his books.

There is a neat, fun group on Facebook called Walldogs. They are murals painters. One of my favorite groups. That is where I first saw Seth Globepainter.

As usual a wonderful start to the w/end with my spirits uplifted! Loved the Woodstock story & Coober Pety.............wow. Fascinating, but I am so claustrophobic. Thanks Ronni :):)Dee

I've been to Coober Pedy; there was a paper umbrella stuck in the air vent (I suppose to keep dirt from blowing right on you). I immediately started sneezing. Psychological? We missed the underground bar.

The kiss guy was interesting. Almost wasn't sure if I was supposed to take him seriously. But I've seen more than one scene on screen completely ruined by the sound of the kiss, so I'm glad he's around.

And the wildlife video -- perfect way to ease into my day.

The eel larvae looked like the ghost of a ribbon moving along the ocean floor. Fascinating.

Like Dee, I am claustrophobic and I wouldn't last one night underground. I could just imagine being buried under all that dirt giving way. No amount of wealth could make me live in Coober Pety.

Sitting in a house surrounded by 6" and drifted snow with temperature not to be over, if to, 30 degrees, your presentation of the world we live in and its oddities as well as its beauties--not to say the oddities are beautiful, too--is such a pleasant way to wind down from having trekked out to the mailbox and to a neighbor's to get the paper to the door. This is the first appreciable snowfall for Nashville since 2003.

Thank you for Goober Pedi, the animals in winter, the Panda joyful wallow, and most of all the unbelievable leptocephalus ballet.

I loved the incredibly beautiful leptocephali and didn't find them at all eerie.

The Coober Pety video was fascinating. I enjoyed seeing in such detail how the inhabitants live their lives underground.

And the discussion of Robert Gates new book should be mandatory reading for all the current presidential candidates. Although I think it's obvious that a candidate who lacks any experience in government at all would not make a good president should he or she be elected.

Coober Pedy doesn't really come up much in conversation, unless opals are mentioned that is.

Instead of snow angels, we get panda angels - wonderful!

I just finally got around to finishing reading and watching this installment of Interesting Stuff after a ridiculously busy weekend. By this morning (Monday) the Gates video was not available, but the rest was very interesting. I especially enjoyed the underground life in Coober Pedy, the transparent eel larvae and that final peaceful video of animals in winter. Thank you, Ronni, for another fascinating episode of Interesting Stuff.

The video of the animals in winter was exceptional. Like the "Flash Mob" of Beethoven's 9th in Barcelona a few years ago. It really lifted my heart.