I think it's WILLIE NELSON's plan to sing with everyone on the planet, at least everyone who can hold a tune. 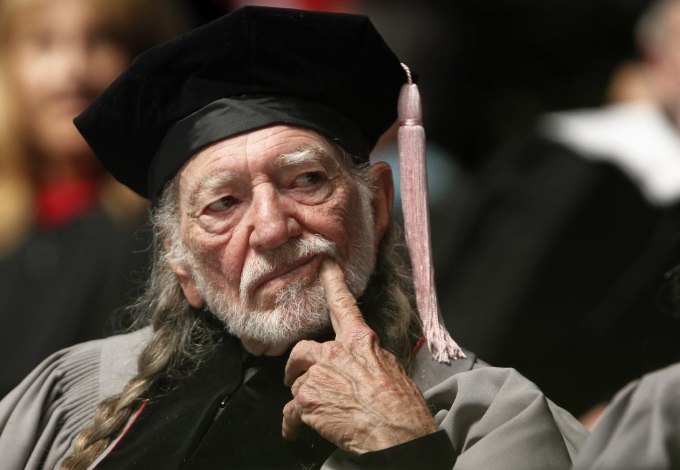 A while ago Willie teamed up with Johnny Cash, Kris Kristofferson and Waylon Jennings in a group called The Highwaymen. I'm not including anything from their albums, but as a bit of a link I'll start with the daughter of one of those and she is ROSANNE CASH. 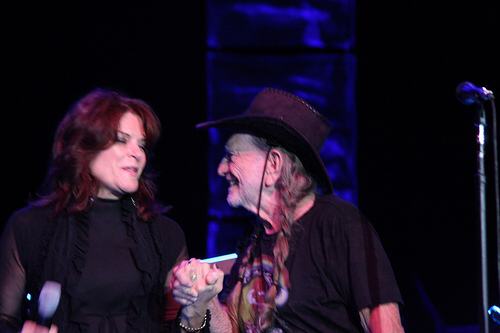 Rosanne is a fine writer, interpreter and performer of rock & roll but because of her pedigree she often gets a gig in country music shows. She can do both really well as is evidenced by her duet with Willie, Please Don't Tell Me How the Story Ends.

♫ Willie and Roseanne - Please Don't Tell Me How the Story Ends He later started his own band and throughout the years it was the spawning ground for some of the greats of country music. Some of those are Roger Miller, Darrell McCall, Van Howard, Johnny Paycheck, Johnny Bush, Buddy Emmons and Willie.

Willie later wrote songs that Ray performed to some success. They remained good friends until Ray died in 2013. They perform Home in San Antone.

I have a fine vinyl album by TRACY NELSON that I haven't thought about for years until I decided to do this column. I'm glad I did as I started listening to it again. Tracy is noted mostly for singing blues but she makes a good country singer as well. She's not related to Willie but he joined her on that album to produce a fine duet, After the Fire is Gone.

♫ Willie and Tracy Nelson - After the Fire is Gone

Townes van Zandt's most famous song would have to be Pancho and Lefty. Willie has the help of MERLE HAGGARD on this one. 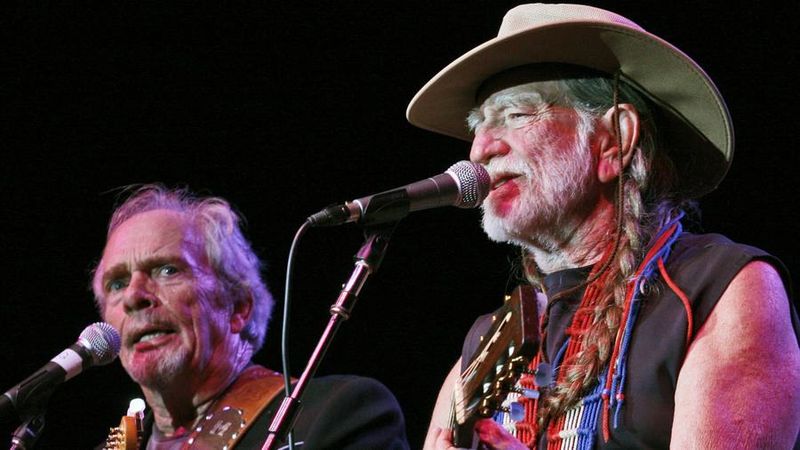 You couldn't call the song a duet; Merle sings only a single verse. He may have had a larger role in this single if Willie hadn't decided to record the song in the middle of the night and woke Merle at 3AM to record it.

Merle did his one verse (perfectly) in a single take and then went when back to bed. 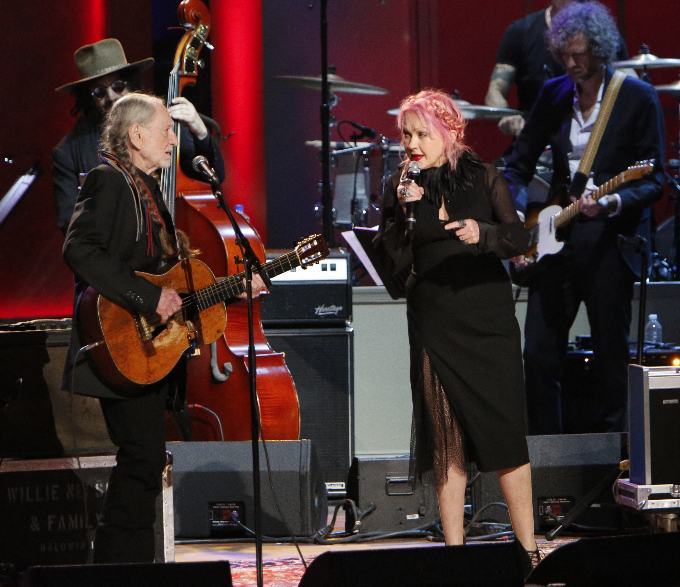 However, like Willie, Cyndi is a songwriter of some substance – not as many songs as Willie, but who has? She's even had hers covered by Miles Davis so that should be good enough for anyone. Willie and Cyndi tackle the rather twee song written by George and Ira Gershwin,

Old Age and Treachery always overcome youth and skill is an appropriate sentiment for this website. I hope you all take it to heart and apply that lesson in your daily lives.

Willie's co-conspirator on the song is his most famous singing partner, WAYLON JENNINGS. 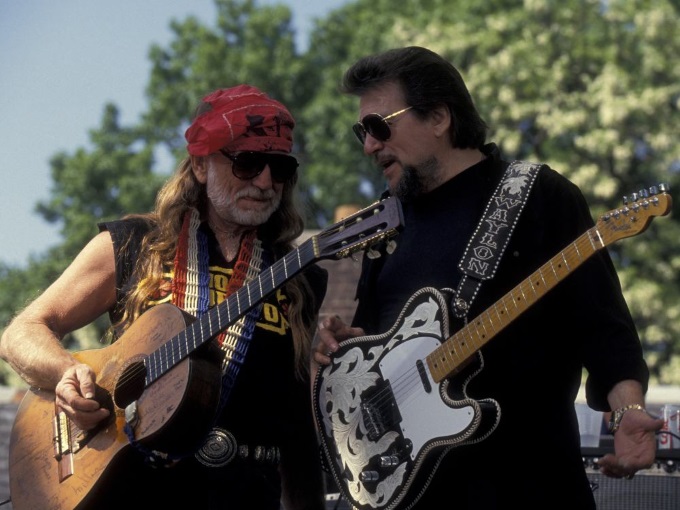 Willie and Waylon performed and recorded together quite often so there's a lot of material to work with. Instead of some of their more famous collaborations, I've gone with this one.

EMMYLOU HARRIS would have to be present in any exercise involving duets and today is no different. 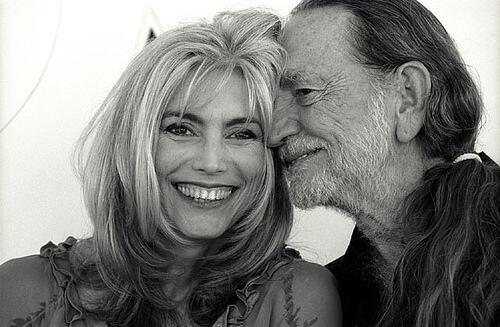 I really don't need to tell you about the lovely Emmy, just sit back and listen to her and Willie sing Gulf Coast Highway.

ASLEEP AT THE WHEEL carry on the western swing tradition made famous by Bob Wills (and some others) in the thirties and forties. 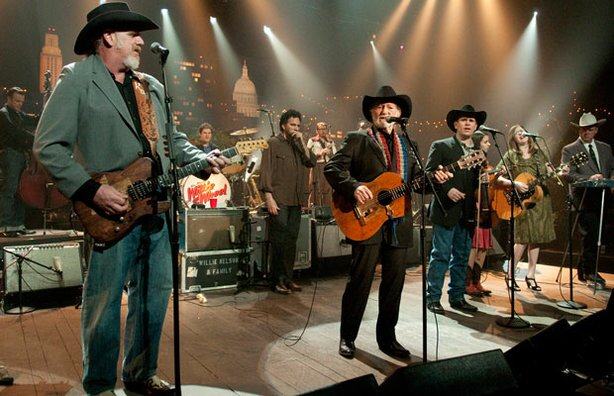 Hesitation Blues goes way back, such that it's usually attributed to "Traditional.” Because of that, several people have claimed authorship (and added their own words to the song); Willie and the Wheel don't do that, they just perform it.

♫ Willie and Asleep at the Wheel - Hesitation Blues

Like Willie, ALISON KRAUSS seems to like singing with other people, lots of other people – not as many as Willie yet but he has a few years on her.

Alison recorded her first album when she was only 14. Back then she played the fiddle and mandolin. Later she started singing as well and she has a fine voice as you can hear on No Mas Amor.

KIMMIE RHODES and Willie have been friends for years and have recorded together intermittently. 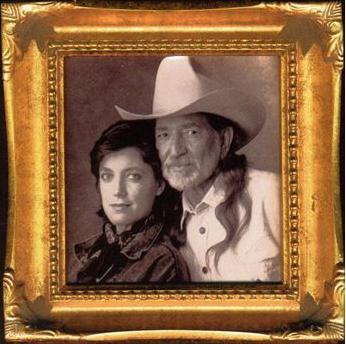 Those tracks have been gathered together and an album called "Picture in a Frame" is the result. The song Love Me Like a Song is taken from that album.

♫ Willie and Kimmie Rhodes - Love Me Like A Song

Loved this post, Peter, but "Hesitation Blues" featuring Willie teaming up with Asleep At The Wheel caused me to comment. That album - Willie And The Wheel - is one my favorites, and I was listening to the CD just yesterday while on an auto trip. Every song is good but one of the best is another priceless duet, with Willie and the underappreciated Elizabeth McQueen on "I'm Sittin' On Top Of The World". Have you heard it?

Keep up the good work!