Home About Archive Contact
Can You Hear Me Now?
ELDER MUSIC: A Barrel of Bachs

Rosemarie and Ray live only on their two Social Security checks and have no savings. They get by with small pleasures and as Rosemarie's 90th birthday approaches, Ray collects cans to afford a meal out together.

Thank Tom Delmore for this lovely and poignant video.

Remember that although the video from Boston Dynamics is real, that headline and the audio are parody. Some people don't get that part. It's laugh-out-loud funny.

If you can stop laughing, thank Jim Stone for this. And if you care about such stuff, MIT Technology Review reported this week that Google is selling off its Boston Dynamics subsidiary that makes amazing robots like these. You can read about the reasons here.

Someone named Geekygirlhere was quoted in The Guardian:

“Yep this happened to me this morning. Working and all of a sudden Windows closed all my programs, logged me out and started the upgrade. I quickly shut down my computer and was able to stop it but my son wasn’t so lucky. Same thing happened to him today.”

Microsoft recently changed the Windows 10 upgrade that every Windows user is nagged about several times a week from “optional” to “recommended." That mean users of Windows 7, 8 or 8.1 who have set their upate option to “install all recommended updates” will, like Geekygirl, be forced into an upgrade they may not want and is almost certainly not convenient at the moment it happens.

Here's a screenshot posted to Twitter of what it looks like when Microsoft takes over your computer for their “upgrade.” 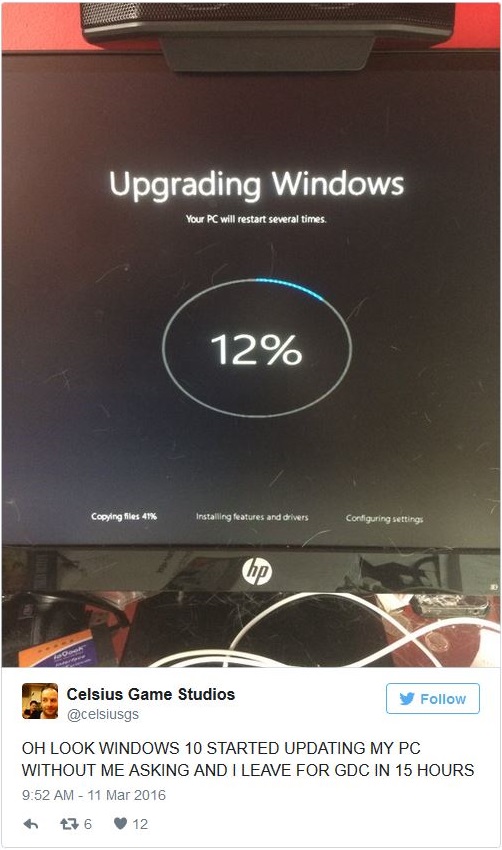 I checked my update settings (Control Panel > Windows Update > Change Settings) and sure enough, there was “install all recommended updates” so maybe I barely escaped Geekygirl's and celsiusgs's predicament of a computer takeover by Microsoft of an update I haven't decided I want.

Now, my update choice has been changed to “Check for updates but let me choose whether to download or install them.” If, like me, you're not convinced you want this upgrade, you might want to check the update choice on your machine.

You are probably aware of the extended and increasingly contentious argument going on between the FBI and Apple about breaking into the cell phone of one of the San Bernardino terrorists.

It's a complex issue and John Oliver, on his HBO program Last Week Tonight understands that. But not at the expense of his signature sense of humor.

It's all good but wait until you get to the end of the essay and his fall-down-funny commercial mocking Apple even though Oliver sides with Apple in this dispute.

It is wonderful in the most bizarre manner.

Roger Ganas sent this story about a mulitmedia exhibit in San Francisco titled Thoughts in Passing from artist Claudia Biçen. There are sketched portraits and brief audio narratives in which nine hospice patients reflect on what it’s like to be dying and on the lives they led.”

Here is Ena who died on 20 February this year:

You can read about the exhibit here and see more videos here.

NOT ALL WASHED UP

Trudi Kappel sent this item from the “Metropolitan Diary” section of the The New York Times. In her email, Trudi said, “Go Florence!”

“Because I raised seven children on the East Side of Manhattan, trips to the supermarket were many and often. Twenty-seven meals a day, my husband would remind me.

“As I approach my 92nd year widowed and living alone, my trips to the market are fewer and well planned. On my way home recently, laden with two bags of groceries, I was happy to take advantage of a wooden bench in front of a Colombian cafe. My arthritic knees were screaming for some relief, and as I gratefully sat down, my eyes fell upon a blue neon sign across the street in a laundry window that read, 'All Washed Up.' It made me laugh.

“Not yet I’m not,” I said under my breath, and I resolutely picked myself up and walked the next two blocks, smiling all the way.

An email arrived from a reader this week who said a friend had forward the video to which was attached this note:

”Apparently they only do this in Australia. They don't tour because it costs too much to transport these highly trained and valuable animals. It take about 2 years to train one giraffe to feel comfortable in the water, and then another 3 or4 years to get them to dive.

“They also train them using only the reward system, unlike other animal exhibitions where they use harsh techniques.”

Someone is pulling someone's leg. The video is as gorgeous and mysterious today as it was when I first posted it here three or four years ago. But it is an animation. Beautifully done but animation - no real giraffes were used in the making. A film by Nicolas Devaux and the Cube Creative Computer Company. Prepare to be enchanted.

The same people have since created another, similar animation with an elephant. It's not quite as magical but it is lovely, too, in its way.

If you are interested in more from Cube Creative Computer Company, here is their 2015 show reel with loads of the variety of work they do:

It seems like every week I have already seen 2-4 of your interesting videos and stories. Is the internet that small, or are we drawn to the same kind of story?

Cheers to Rosemarie and Ray! And to Tom Delmore for sharing the video on their love, humor, acceptance, patience, hope, and appreciation for small yet giant blessings of hummingbirds and hamburgers.

While I can't say that I have ever seen a diving giraffe, I do remember watching a horse dive off the famous Steel Pier in Atlantic City.
Actually "dive" is a misnomer. It was more like a horse stumbling off the Steel Pier. But good fun anyway.

From now on when I see the Naked Cowboy, I'll think of him as someone's beloved son (rather than just a really buff nut job. )

I must really need an attitude adjustment because when I see the videos of the old old and their not-quite-with-it interactions I cringe with pity? In just the right setting they can be made to look functioning and everyone is so patient and proud. I know, I know I am bad.

I guess it is good they appear to be oblivious to their plight ---- and we just get shown the exceptionally astute ones. Is it worth it? This longevity?

I still take time and smell the roses and enjoy life but when interacting with the public I try to be prepared and not hold up the process. I am sensitive to the overt impatience of others. We are not all that welcome in many situations.

The Claudia Biçen pieces are just wonderful. I followed the links and looked at all of them. May even be able to get to a showing.

I must add my voice to Victoria's on the Rosemarie and Ray video: "Is this longevity worth it?" I can't say no, but I began watching this video yesterday, but after the first few minutes, had to defer it until I was in a better frame of mind. I'm happy for their independence, but really -- Ray gathering cans for what must have been quite a while just to be able to provide her a birthday trip to In-N-Out Burger?? It breaks my heart.

Thank you for the heads up on the potential for an unwelcomed and univited Windows 10 "update". I followed your directions and now feel more in control of my beloved Windows 7. I don't want to update untile I must get a new computer. My husband has 10 oon his computer by virtue of innocently pushing the update button without checking win the house techie, me. We've been cleaning up ever since.

Damn... The Rosmarie and Ray video is one of the most moving things I've seen in... well... I don't remember how long and, believe me, that's a long time. Believe it or not, I was looking around for blogs dealing with retirement, seeing how I'm on the threshold of same. I dunno if I'm just in a strange emotional place right now but... seeing these two enjoying each other for what seems like an eternity (I don't think it was ever mentioned how long they'd been together but I'm guessing it's been longer than many of us have been alive)... well... it sure puts a different twist on the trials of growing older. Maybe we should start a crowdfunding campaign to raise enough money to send them to In-and-Out on a regular basis. I'm sure there are enough people out there who feel the privilege of watching the video is worth at least that much. Thanks...